Haggerston, an area in the Borough of Hackney, northeast London, is notable for few things. For its Hackney City Farm. For its Haggerston School, designed by Ernö Goldfinger. For its long association with clowning [1]. And for famous residents such as comet-namegiver Edmund Halley and psychogeographer Iain Sinclair.

All of which you might know from living locally or from looking it up on Wikipedia. But neither option will have informed you of the exciting skiing facilities available in Haggerston. For that, you’ll have to consult the London A to Z. There it is, in the middle of Haggerston Park, next to the City Farm: a Ski Slope! 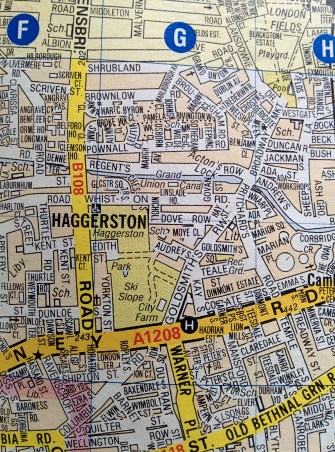 Now you ski it…

Stick your slats on the Overground to Hoxton or the Central Line to Bethnal Green, drag them another mile to said location… and the only thing going rapidly downhill will be your good cheer. London’s landmark street guide has been lying to you. There is no ski slope at Haggerston Park. But the power of maps is such that the local Haggerston Park Users Group in 2010 devoted at least one of its meetings to finding out why that ski slope was mentioned in the A-Z. The conclusion, included in the minutiae of that meeting: “There is no evidence that there has ever been a ski slope and it is thought to possibly be an Ordnance Survey blip?”

The London A-Z is one of my favourite books. When I still lived in the city that King Lud built, my battered copy guided me everywhere within Zones 1 and 2. And when online mapping took over that job, I still took it along. Its batteries never wore out, and it never required an internet connection. And no online map is as beautiful, or feels as canonical, as the ones between its covers. 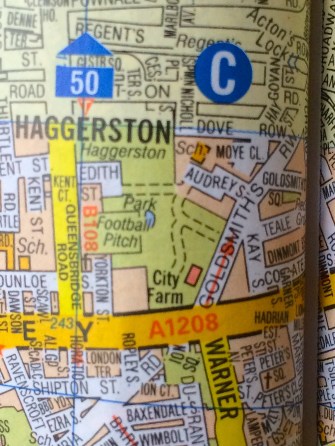 But the Guide to all of London (sorry, Zones 3 to 9) is not flawless. Even more shockingly, its imperfections are deliberate. The London A-Z contains so-called map traps: non-existent features inserted into the map to catch out unauthorised copiers of the original. The phenomenon is well-known and widespread. The fake entries can take the form of so-called trap streets, deliberately altered street widths, erroneous elevations or depths, or even whole “paper towns” (see #643 for more on the curious case of Agloe, New York — the paper town that came to life).

The London A-Z is said to contain about 100 trap streets (or other map traps), one for each of its pages. That rumour seems to stem from a quote to that effect by a spokesperson of the Geographer’s A-Z Street Atlas company, which produces the London A-Z, in Map Man, a BBC TV program from 2005.

On the one hand, it makes sense to put a trap on every page that can be copied separately. On the other hand: That sounds just a bit too much like an urban legend. Especially considering the evidence of trap streets in the London A to Z. Which is close to zero.

The example that keeps cropping up in any abortive list is Bartlett Place, named after Kieran Bartlett, an employee at the Geographer’s A-Z Street Atlas company. In my opinion, not a “pure” trap street, as it merely mis-labelled an existing pedestrian walkway, which in more recent editions has anyway reverted to its true name, roadway Walk.

A lesser-known example was discovered by arts student Maisie Ann Bowes in the course of a project on “location” for the London College of Communication. In a blog entry dated October 23, 2013, she describes the process: “I started by photocopying pages of the A-Z, and comparing the roads on it to the roads on Google Maps, checking one by one that the roads matched up by crossing them out. This was a long, tedious process, but I found one on the first page.” 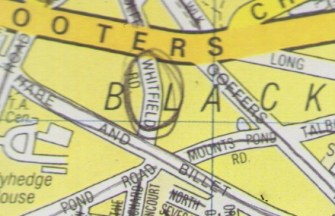 Whitfield Road in the A-Z. 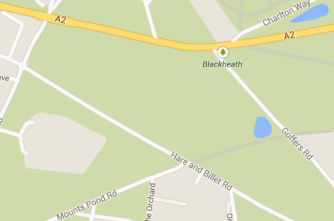 No Whitfield Road on Google Maps.

What she found was Whitfield Road. In her A-Z (and my edition too), it’s the continuation of General Wolfe Road on the south side of Shooters Hill Road, connecting it to Hare and Billet Road. But on other maps, and in real life, there’s just the unbroken green of Blackheath Common.

And then there’s The Great Wen, a great London blog, which discussed the Haggerston Park Ski Slope late last year, after a reader sent in a picture of the strange map trap. The blog notes that the ski slope “hasn’t been used for about a decade” in the A to Z. Are map traps being eliminated, or simply replaced upon discovery?

Either way, the gap between the 100 traps supposedly hiding in the A-Z and the measly trio described here is far too great. We’re stuck in a cartographic Catch-22: It’s virtually impossible to prove that there aren’t a hundred map traps hidden in the A-Z. But it’s equally difficult to identify any trap streets, phantom alleys, or other spectral street architecture on its maps — let alone all of them.

For consolation, we turn from unfindable real trap streets to a fictional one, so beautifully described in China Miéville’s Kraken:

“Don’t you know what a trap street is? The cult collector had said, and no she had not, but a moment online sorted that. Invented streets inserted into maps to right copyright wrongs, to prove one representation was ripped off from another. It was hard to find any definitive lists of these spurious enmapped locations, but there were suggestions. One of which, of course, was the street on which the Old Queen was.

“So. Was it that these particular occult streets had been made, then hidden? Their names leaked as traps in an elaborate double-bluff, so that no one could go except those who knew that such traps were actually destinations? Or where there really no streets there when the traps were set? Perhaps these cul-de-sacs were residues, yawned into illicit existence when the atlases were drawn up by liars.” 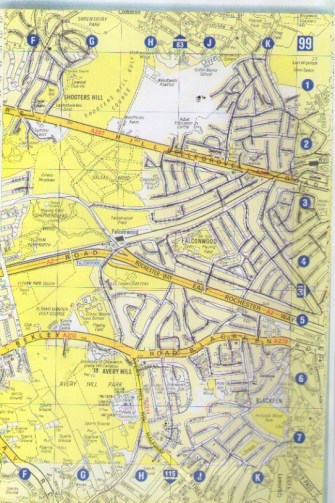 How to trap a trap street: lots of legwork.

Even Miéville acknowledges that trap streets are hard to find. So is that the end of it? Surely not! I say we crowdsource ourselves out of this impasse, and follow in the footsteps of Bowes. Who, by systematically pacing up and down London’s streets unwittingly copied the method Phyllis Pearsall used to compile the original A-Z, back in 1930s [2]. And so shall we. Or rather, anyone with an A-Z of London, and a few days to spare. Pick a page. Walk the streets. Compare to Google Maps and other sources. Tease out the differences. And help the map nerd community finally find London’s 97 missing map traps! 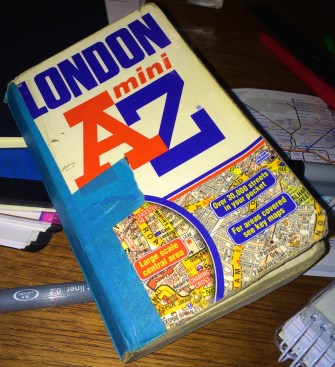 Image of the Haggerston Park Ski Slope taken here from The Great Wen. The slopeless version from my own A-Z. Battered front cover picture also mine. Images of Whitfield Road and environs taken here from Maisie Said What.

Please send any found map traps (or any other map suggestions) to strangemaps@gmail.com.

[2] But never did, according to her half-brother, Alex Gross.

In the perilous mountains of Tibet, archaeologists unearthed ancient hand and footprints that seem to be the creative work of children.
Up Next
Culture & Religion

Medical expansion has led people to believe they are less healthy. It seems counterintuitive, but there may be a certain burden of truth that comes with the price of medical advancements.