What connects the Chinese port of Quanzhou with Sagres, a tiny parish in southern Portugal? No, it’s not the New Silk Route, the Sino-European rail link inaugurated in 2017 (1). The answer is so arcane that it will surprise most inhabitants of either place: they are the extreme points of the world’s longest straight line over land (2).

Following the course of that line would require directional rectitude of the highest degree. Travellers would have to forgo the relative comfort of well-worn roads and mountain passes and traverse daunting peaks and inhospitable deserts – not to mention innumerable private houses and public buildings.

They would cross 15 countries; skirting Madrid and Switzerland’s alpine highlands; cutting off a corner of Austria and passing just north of Auschwitz in Poland; barely touching Ukraine and slicing through Belarus; travelling through Russia and Kazakhstan before hitting China and reaching the Formosa Strait; but not before dipping into Mongolia twice.

Because the globe is round and this map is not, the world’s longest straight line over land – like all others long enough – looks like a bendy one on this image. For anyone walking the line, though, it would have been straight as a ruler, and, at the end of that trip, close to 20,000 miles long. 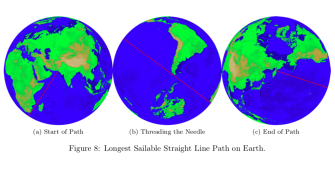 The world’s longest straight line on land was calculated by researchers Rohan Chabukswar of the United Technologies Research Centre (UTRC) in Cork (Ireland) and Kushal Mukherjee at IBM’s Research Laboratory in New Delhi (India).
In a paper published earlier this year (and last updated on 25 December), they set out their solution to the question of finding the world’s longest straight lines over land and at sea. That question sounds simple enough, but isn’t: “This is an optimisation problem, rendered chaotic by the presence of islands and lakes, and indeed the fractal nature of the coasts”.

They were prompted by a map that had raised a lot of discussion since its first publication on Reddit in 2012. Posted by user kepleronlyknows, it purports to show the longest possible straight-line sailing route in the world: from Pakistan to Kamchatka, threading the needle twice – through the Mozambique Strait separating Madagascar from the African mainland, and via the Drake Passage between South America and Antarctica.

A long walk indeed, but a straight one: Portugal to China

Commenters have since sought to prove or disprove the longest straight-line sea route, and the analogous route over land. Suggested but disproved longer routes include two nautical ones: from Norway to Antarctica – a valid route, but not in fact as long as the Pakistan to Kamchatka one; and from Québec to British Columbia, which turns out not to be a perfectly straight line.

One suggested longer overland route leads from from Wenling in China to Greenville in Liberia. But this line crosses the Dead Sea and if, as the authors say, that qualifies as a ‘major body of water’, it disqualifies the route as being entirely over land. 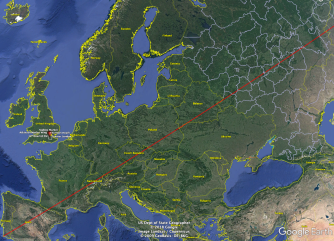 Strangely enough, the direction from Portugal to China is due northeast

So Messrs. Chabukswar and Mukherjee decided to put the issue through a scientific wrangler. Instead of conducting an exhaustive search of all possible routes – more than 233 million great circles (3), as the authors suggest – they calculated the two paths using a so-called branch-and-bound algorithm. 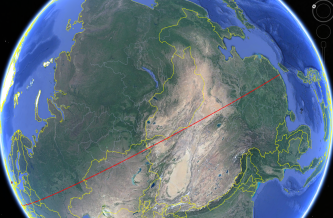 The researchers formulate a few theoretical caveats to their result, and one practical one: “The problem was approached as a purely mathematical exercise. The authors do not recommend sailing or driving along the found paths”.

There is hope, however, for whoever had their heart set on long straight-line travels. Here are a few of the world’s longest straight-line roads (5):

There is little remarkable about either Haradh or Al Batha, two dusty towns in Saudi Arabia’s Rub-al-Khali desert, or the featureless distance between them. Except that almost that entire stretch is traversed by a dead-straight road. Leaving the oil town of Haradh in the interior of the country, Saudi Highway 10 heads due east in a curveless line for 159 miles (256 km), bending slightly before entering Al Batha, near the Gulf coast and the Saudi border with the United Arab Emirates. That makes Highway 10 the longest straight stretch of road in the world.

In its entirety, US Route 54 runs from Griggsville, Illinois to El Paso, Texas, covering 1,197 miles (2,115 km). For 108 miles, from Liberal, Kansas to Dalhart, Texas, US-54 runs in a virtually straight line (passing through Oklahoma as well). There are a few slight kinks in over the course of 54’s ‘straight’ trajectory, though.

The entire Eyre Highway is 1,030 miles (1,660 km) long, linking Norseman in Western Australia to Port Augusta in South Australia across the deserted Nullarbor Plain. It is part of Highway 1 that connects Perth to Adelaide, and the only ‘sealed’ road between both states. Between Balladonia and Caiguna, the road is completely straight for 90 miles – the longest stretch of straight road in Australia, commonly known as ’90 Mile Straight’.

Longest Straight Line Paths on Water or Land on the Earth, the paper by Rohan Chabukswar and Kushal Mukherjee, can be accessed here at arxiv.org.

(1) A 7,500-mile (12,000-km) China Railway cargo service from Yiwu, calling on Hamburg, London and Madrid. The service could become part of China’s wider Belt and Road Initiative: a massive infrastructure project connecting Chinese manufacturing to its markets in Europe and elsewhere.

(2) Perhaps the 1,000-odd inhabitants of Sagres, the westernmost point on the European road network, will be less surprised. Sagres also is a terminus of the longest (non-straight) driveable distance between two points on earth. The other one is Khasan, a Russian city on the North Korean border, and the eastern terminus of that country’s road network. The route connecting both places is 8,726 miles (14,043 km) long.

(3) A great circle or orthodrome is the largest circle that can be drawn on a spherical object.

(4) Sonmiani is also notable as the northernmost point of the Arabian Sea, a seaside resort for Karachiites and a launch site for the Pakistani space agency.

(5) Most so-called straight roads have slight curves, hence the many differing lists.

Reality is more distorted than we think.
▸
with
Big Think
The Future

Is there actually anything deserving of the term AI?
Strange Maps

Starting just about now, leaves start changing color from north to south, high to low, light to dark.
Up Next
Health

How your brain makes you overeat