How Donald Trump Sees the World — in Three Maps 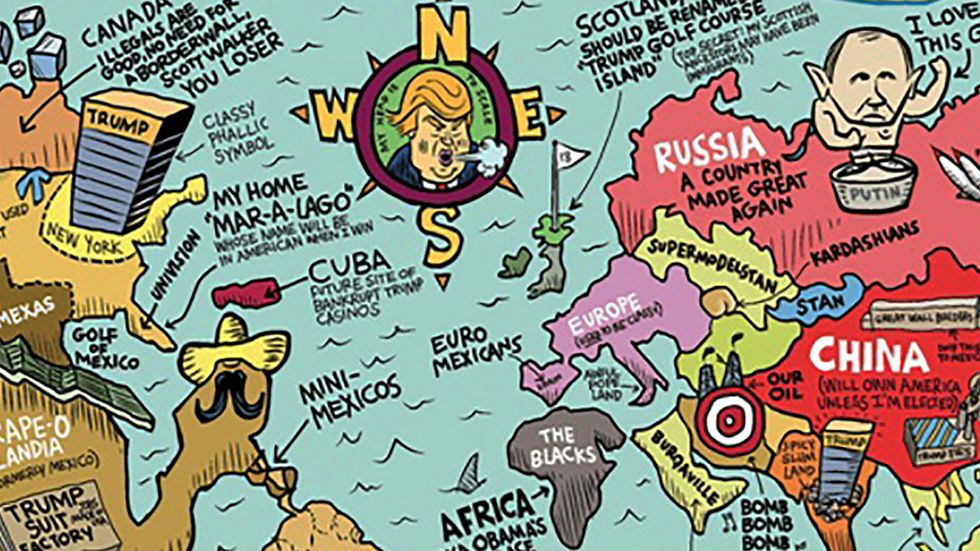 "I know the outer world exists": from any other presidential candidate, that most basic of foreign policy affirmations would sound merely comical; from the mouth of Donald Trump, it sounds like a vague threat – especially to anyone in the 'outer world' (i.e. that not inconsiderable part of the planet outside the U.S.)

Trump's foreign policy so far seems to rest on just two basic premises: keep that outer world out, and make it pay. The proposed Mexican Wall and a blanket ban on Muslims entering the U.S. are two examples of the former. On the latter point, Trump has called into question America's strategic alliances and free trade agreements as 'free rides' for America's military allies and economic rivals, respectively.

Under Trump, America would no longer be the policeman of the world; the U.S. should stop "paying to defend countries that can afford to defend themselves"; on the other hand, he has not ruled out using nuclear weapons in Europe, because "Europe is a big place". Nor would China continue to "suck (America) dry". Trump would "start taxing goods that come in from China".

Beyond that, the presidential hopeful has been as scathing about assorted people and places around the world as he has been for anybody and anything he dislikes at home. Trump has called NATO "obsolete", derided European leaders as "weak", accused Angela Merkel of "ruining Germany" (and called Germany a "total mess" for good measure), mocked Saudi prince Alaweel bin Talal as "dopey", painted Brussels as a "hellhole" and misrepresented Britain's second-biggest city Birmingham as a "totally Muslim city".

In January, the House of Commons debated whether to ban Trump from Britain for 'hate speech' – an unprecedented initiative against an American presidential candidate, even if the MPs eventually decided against it.

This Wednesday, Trump will flesh out his foreign policy in a speech to the National Press Club in Washington DC. It will be interesting to see whether he continues the 'America First' rhetoric — ague, blunt and often self-contradictory because, Trump has said, he "wouldn’t want (our enemies) to know what my real thinking is" — or moderates his tone and structures his views to appear more 'presidential'.

But for large parts of the audience – especially those out here in the outer world – the speech won't matter. Trump's world view has already solidified into caricature, most of which is his own doing, to be fair.

The three maps have a few things in common. Of course, the US of A is shown bigger than strictly accurate; Africa is touted as Obama’s birthplace (a reference to Trump’s earlier involvement in the ‘birther’ movement (1); and Muslims and Mexicans get some prominence (only to be insulted better).

The first map, from the Huffington Post’s UK edition, riffs on Trump’s anti-Muslim tantrum, over-representing the Muslim 'danger' by labelling Greenland as occupied by 'Eskimo Muslims', filling China with 'Chinese Muslims/hackers', and transmogrifying Birmingham into 'Muslimham', in the middle of a 'no go zone' covering most of Britain (except Trump’s proposed 'golf course' in Scotland). Europe has been reduced to 'Germany', and 'Paris' has been misplaced somewhere inside Russia.

The actual Muslim world is labelled in the biggest type on the map as MUSLIM. But an arrow points to Saudi Arabia as the place with 'some good rich Muslims'. So they’re not all bad.

Mexicans, however, are also bad (and not rich!) Hence the 'really big wall' – built near the Panama Canal, effectively annexing Mexico to the U.S. 'Mexico' has moved to South America, which is filled with 'criminals' and 'rapists'. A 'northern wall' – a nod to Game of Thrones – separates the United States of Trump from what’s left of Canada… sorry: Northern Mexico.

The 'best tower in the world' (no prizes for guessing whose name graces its façade) is shielded from the evil outside world by a 'total and complete shutdown barrier', repeated on the UST’s west coast.

Which leaves two places in the world about which Trump is mildly positive: Russia may still be ruled by 'commies', but at least they have a 'good leader'. And Australia, which apparently has not done anything (yet) to offend Trump, is 'probably ok'.

No such luck for the Ozzies on the second map, of unknown provenance, where the island-continent Down Under is marked as the source for 'red kangaroo scrotums (that) make great wigs'. A bloated U.S. is renamed, simply, 'Trump' (Alaska is 'Cold Trump' and Hawaii is the 'Trump Islands' – fortunately, the map spares us a similarly renamed U.S. Virgin Islands).

Canada is 'home of Ted Cruz who I will destroy'. Whom I will destroy – but whom cares about that anymore. Mexico, predictably, is synonymous with 'rape', Central America is only good for 'vacation' and South America simply is 'too hot to wear a suit'. Cuba? Forget it, that’s Mark Cuban stretched out below Florida, near a few islands that are 'smaller than Trump Tower'.

Most of Europe is 'not my problem', except for Greece, which is 'definitely not my problem'. About Eastern Europe, Trump seems to remember that 'I’ve had two wives from over here somewhere'. For both Sweden and Finland, he has but one message: 'You’re Finland!' Britain has been reduced to the 'land of the Queen and Piers Morgan', and Ireland (instead of Scotland) is good for only one thing: 'golf'.

Africa is not Africa, it’s 'Obama is from here'. Israel is another place identified with just one guy: 'my boy Netanyahu'. The whole of Arabia? Suffice it to say: 'I saw American sniper'. I bet Bradley Cooper could kick Sykes Picot’s behind from here  to Baghdad. The mapmaker didn’t even bother coming up with anything offensive for the rest of the Middle East: 'some dumb opinion about Muslims'. Fill one in. There’s plenty floating around.

Russia is ruled by a guy Trump can’t wait to go on a man-date with: Putin (a.k.a. Trump of the Tundra). The Japanese are not reducible to one strong leader, but 'they build top-notch escalators.' China is the 'New England Patriots' (apparently both run on the same Marxist-Leninist footing) and Mongolia is 'China by association' (gone are the times when it was 'Soviet by association'). South Korea? Right there between China and Japan, north of North Korea. Ehm.

India can expect some hostility from soon-to-be president Trump, because 'they copied my Taj Mahal', the money temple that has graced the Atlantic City boardwalk since time immemorial. Hey, Sri Lanka, get your act together: 'What country is this? Zero brand recognition'. Still, better than Indonesia: 'What’s all this? ISIS?' There’s a similar complaint about Iceland. Or was that ISIS-land?

By far the most detailed map is Donald Trump’s View o’ the World, which repeats the claims about Mexicans, Obama, Putin, Eastern Europe ('Supermodelstan') and border walls. This map looks ahead quite a bit into the future, seeing Cuba as the 'future site of bankrupt Trump Casinos', apportions blame where there is none ('Antarctica – melting not because of climate change (…) but because of those terrible penguins'), name-checks fellow celebrities (a rump-shaped Armenia is named 'Kardashians').

Some map details recall specific incidents in Trump’s presidential campaign so far. 'Awful Pope land' refers to the Vatican leader’s criticism of Trump’s exclusionary instincts, a boatload of 'Syrian refugees I will send right back', and even John McCain is again called a 'P.OW. loser'. This map was made by Lalo Alcaraz, an American cartoonist of Mexican descent, which provides the putative mapmaker – Trump himself – with the opportunity to use one of his by now classic put-downs: "not their best."

(1) A movement which questioned Obama’s legitimacy as president, based on the allegation that he was born in Kenya, not Hawaii.