Researchers have reason to believe dinosaurs were already doomed before the legendary asteroid landed. The big rock that collided into what is now the Yucatan Peninsula may have just allowed the dinosaurs a more memorable end, according to a new study published in the Proceedings of the National Academy of Sciences.

“[A]t 66 million years ago an asteroid the size of Denver traveling 20 times the speed of a bullet crashes into the Yucatan Peninsula and causes a massive extinction of all animals that are larger than dogs on the planet,” says Kirk Johnson, the Sant Director of the National Museum of Natural History.

However, researchers from the Universities of Reading and Bristol say there’s some debate over this explanation. An asteroid impact has more concrete evidence—there’s a giant crater and a noted steep decline in species in the geological record dating back to the point of impact. But a new statistical model shows that dinosaurs were dying out faster than they were being born pre-exctinction event. This would have made them extremely vulnerable to extinction from, say, an asteroid impact.

The researchers looked at three species: the Sauropodomorpha (blue), Theropods (red) and Ornithischia (green). All three of these species experienced a dramatic decline prior to the asteroid. However, the graph below also shows how some species–the Hadrosauriforms (light green) and the Ceratopsians (light blue)–were thriving at the end of the Cretaceous period. The researchers believe these creatures were diversified prior to the impact. “The powerful jaws and massive dental batteries of these herbivores might have been adapted to other tougher nonangiosperm plant food, and they benefited from a new adaptive complex in food processing,” the researchers write. 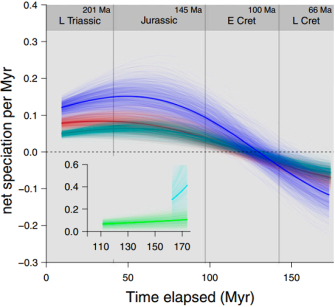 “We were not expecting this result,” Dr. Manabu Sakamoto, the palaeontologist who led the research, said in a statement. “While the asteroid impact is still the prime candidate for the dinosaurs’ final disappearance, it is clear that they were already past their prime in an evolutionary sense.”

The asteroid was the final nail in the coffin, they say, but something else was preventing these creatures from evolving millions of years before the final impact. What made the dinosaurs loose their edge? Continental shifts, volcanic activity, and a number of other changes in their environment could have played a role in their decline.

This may have left room for other species to begin their rise up to ecological dominance. “The decline of the dinosaurs would have left plenty of room for mammals, the group of species which humans are a member of, to flourish before the impact, priming them to replace dinosaurs as the dominant animals on earth,” said Dr. Chris Venditti, an evolutionary biologist from the University of Reading.

Earth and Mars to scale in terms of size and color. Mars is shown in winter, with polar icecaps. Image credit: NASA, with modifications by Wikimedia Commons user Jcpag2012.You’ll get […]