The Geography of Empathy and Apathy: Some Countries We Care about More than Others

Compassion comes is five concentric zones, according to this cynical map. 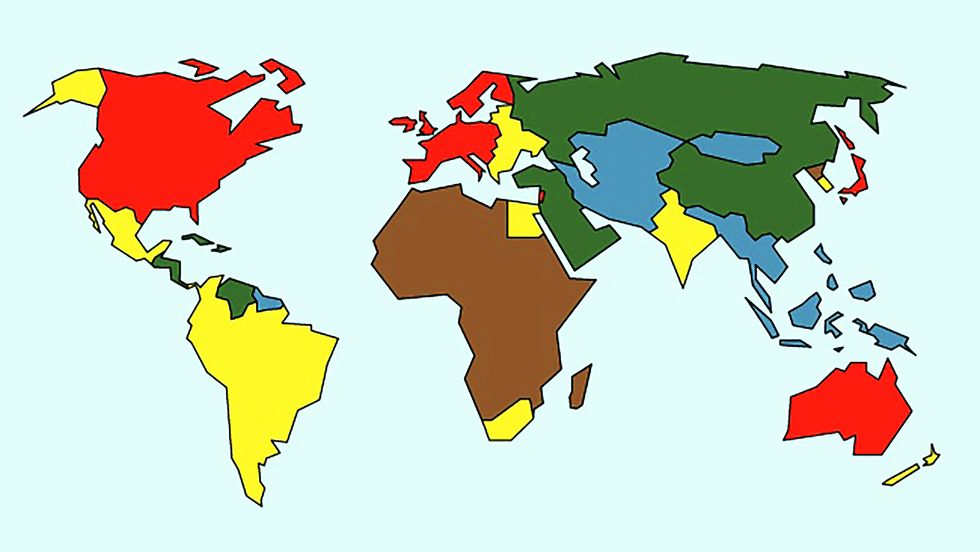 Compassion is tricky. Solidarity is a minefield. Which natural disasters, which terrorists attacks do you feel more keenly? If you're like most people, it will be those incidents closer to home - both in a literal and figurative sense. We are not as magnanimous as we think; our sympathy has limits — and those limits are, to a certain extent, geographic.

As shown by this cartoon map, the crude offensiveness of which is shocking only in so far as it is true. This Mapamundi Tragico colour-codes the horror we experience, and the concomitant empathy we feel, for the tragedies that occur all over the world, from a Western perspective. Those feelings of empathy decrease as the cultural, economic, and geographical distance to the disaster and its victims increases.

The map details five concentric zones of compassion. The red zone, fairly contiguous with what used to be called the "first world," is Ground Zero for our sympathies. For disasters in Canada and the U.S. (but not, strangely enough, Alaska), Western and Central Europe, Israel, Japan and Australia (sorry, no New Zealanders!), we say: Que gran tragedia!

The second circle of sympathy comprises most of Latin America (but not Venezuela, nor the Central American states), the part of Eastern Europe squeezed between Russia and the West, Egypt, South Africa, India, and South Korea. Something terrible goes down here, we can still bring ourselves to think: Ay no, qué triste. But if you're in a train wreck or plane crash in Russia, China, the Middle East, Venezuela, Cuba, or Central America, we shrug: Bueno, asi es la vida. No tears please, they make you look even poorer.

There's worse depths our empathy can sink to. Dozens of miners trapped underground, an apartment building ablaze, a bomb going off in a market place — if that happens in the Guyanas, Mongolia, Central Asia, or the bits of that continent to the west or east of India, our reaction is: Wait a second, does that country even exist? But that's still better than our response to tragedy in most of Africa: Mneh. Or when will your Facebook profile start reflecting your concerns about that famine now looming in east Africa?

Image found here on Cinismo Illustrado. For more on the link between geographic proximity and newsworthiness, see #266.