The world has added over 800 million people over the last decade – a number so vast it is almost meaningless. Unless you convert it to more familiar units of measurement: Four Brazils. Two and a half times the U.S. More than half of China. But nothing brings the size and shifts of the world’s population into focus like a world map. Except perhaps two world maps.

Both maps compared here were published on July 11, World Population Day – the first one in 2004, the second one last Friday. They show the projected populations for 2005 and 2015 respectively. Both are cartograms, using the same method to present each country’s population size: one square represents one million people. The resulting distortions show us a world map of relative population sizes, with China and India dwarfing the rest of the world. 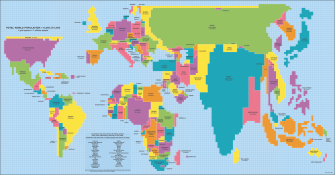 The U.N. designated July 11 as a day to ‘reflect’ on population issues, in commemoration of the fact that humanity passed the 5-billion mark on that date in 1987. Reflecting has done little to slow the rate of increase. Humanity reached 1 billion in 1804. It took us 123 years to add the second billion, 32 years for the third one. Since then, we’ve added another billion every 14 years or so, a breakneck speed that looks set to continue for a while. In 2005, we were at 6.4 billion. Right now, we’re more than 7.2 billion. By 2042, we’ll be 9 billion. 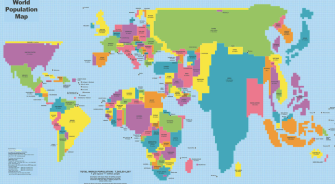 Projected population growth between 2005 and 2015 represents an increase of about 12%. Comparing both cartograms shows how unevenly that growth is spread across the world. While a number of countries, notably in Africa and Asia, continue to add people at a very high rate, others have reached an equilibrium – most but not all in the so-called developed world. A few countries are even experiencing a decline in population. 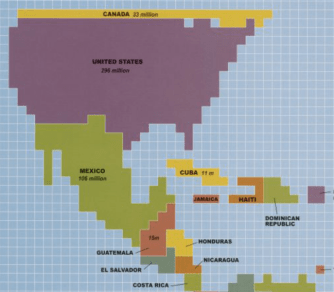 This population-based cartogram for 2005 amplifies the dominance of the U.S. (296 million) of the North American continent, and reduces Canada (30 million), geographically larger but demographically much, much smaller, to the status of ‘America’s Hat (see also #339). Together with Mexico (106 million), they represent the bulk of North America’s 512 million inhabitants. Of the other nations in the Carribean and Central America, only Cuba (11 million) and Guatemala (15 million) have over 10 million inhabitants. The purple square next to the Dominican Republic is Puerto Rico (4 million), the single square south of there is Trinidad and Tobago (1 million). Nations with less than 1 million are not shown on the map. 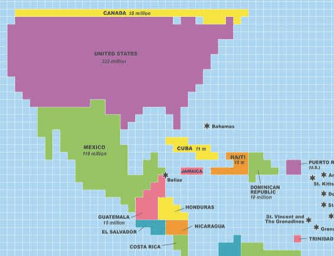 By 2015, North America will have added about 50 million inhabitants, most of which in the U.S. (+26 million) and Mexico (+13 million). Some of the smaller nations add a million (e.g. Honduras, Nicaragua, Costa Rica), but others are stagnant (Cuba, Guatemala) or even shrinking (El Salvador – 7 to 6 million). Both Haiti and the Dominican Republic join the 10-million club, adding 3 million people to the already rather crowded island of Hispaniola, shared by the two nations. In 2005, the population in South America is seemingly distributed in line with its geography – there don’t seem to be any major distortions of the map. Although Ecuador (13 million) looks bigger than normal and the three Guyanas – all less than a million inhabitants – have disappeared. Brazil is the undisputed heavyweight of the continent, with Colombia (43 million) a distant second, and Argentina (40 million) only third. 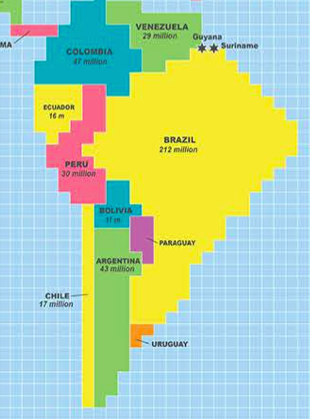 By 2015, Brazil has added 26 million inhabitants – as many as the U.S. – and breaks the 200-million limit. Only Uruguay (3 million) is stagnant, everybody else progresses. Colombia adds 4 million, as does Venezuela (to reach 29 million). Argentina and Ecuador add 3 million, Peru and Bolivia 2 million each (and reach 30 and 11 million, respectively). As a whole, South America grows from approximately 370 million to over 415 million – as in 2005, only 43% of the total for the Americas, which as a whole grow from 881 million to 975 million. Not long now til the billionth American. 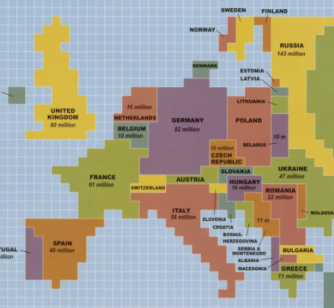 The E.U. also has its ‘Big Five’ – shorthand for the largest economies that many multinationals concentrate their efforts on. This 2005 population cartogram clearly shows which they are: Germany (82 million), France (61 million), the U.K. (60 million), Italy (58 million) and Spain (40 million). Taken together, these five alone outnumber the U.S. Most other European countries are tiny by comparison – remarkably often around the 10-million mark. Only Poland (39 million) and Ukraine (47 million) have similar demographic heft. Russia is a different matter: with its 143 million inhabitants, it plays in a different league as the other European states. 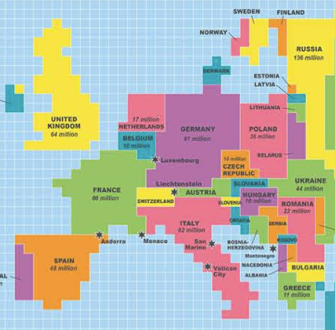 The 2015 cartogram shows a stark dichotomy in Europe: remarkable shrinkage in some states, robust growth in others. The biggest loser is Russia, dropping 7 million, the biggest winner is France, gaining 5 million – Russia is only barely double the size of France now. The U.K. adds 4 million, looming ever larger over the Continent, where Germany has shed 1 million, as well as – more dramatically – Lithuania: from 4 to 3 million. Ukraine loses an entire Lithuania, dropping from 47 to 44 million. On paper, Serbia seems to have lost the biggest share of inhabitants: from 11 to 7 million. But that of course is due to less to dropping fertility rates than to the secession of both Kosovo and Montenegro. Remarkable: Spain and Italy, both severely hit by the economic crisis, both add substantial numbers – Spain grows 3 million to 46 million, Italy adds 4 million and totals 62 million. In all, the European continent manages to add 5 million, from 726 to 731 million – a virtual status quo. Even back in 2005, it was clear which country was Africa’s demographic superpower. Not Egypt, a respectable second with 78 million, but Nigeria, almost double that size at 141 million. Other big hitters: Ethiopia with 70 million and DR Congo with 60 million. South Africa came in only 5th, with 43 million. The continent’s biggest countries in area, Sudan (40 million) and Algeria (33 million), are only second-tier when it comes to population. 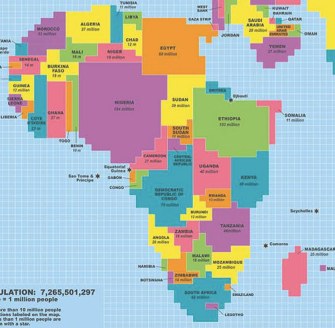 From about 889 million in 2005, Africa reaches 1.1 billion in 2015. In just a decade, six countries manage double-digit gains in millions of inhabitants: Nigeria adds 43 million (total: 184 million), Ethiopia adds 33 million (and joins the Triple-Digit League: 103 million), DR Congo adds 19 million (and reaches 79 million), Kenya adds 14 million (and goes from 32 to 46 million), Uganda adds 13 million (adding 50% to its 27 million, reaching 40 million), and Egypt adds 10 million (78 to 88 million). Sudan seems to lose a million (40 to 39 million), but this is due to the secession of South Sudan (11 million), so in truth here too we have double-digit growth. Remarkably, the tiny Central African countries of Rwanda and Burundi have both grown beyond 10 million (13 and 12 million respectively). But according to these maps, Angola takes the crown: growing from 11 million to 20 million, it has almost doubled in size over the course of a single decade. This 2005 map explains some of Saudi Arabia’s geopolitical unease. It (26 million) is squeeze between Iran, a powerful and much larger (68 million) archenemy to the north, and Yemen, its poor, unstable and crowded (21 million) neighbour to the south. Israel (6 million) is shown as a vice, gripping the West Bank (2 million) and isolating Gaza (1 million). Turkey’s 70 million give it strategic weight in the region. As would Pakistan’s 162 million – if it weren’t occupied with the insurgencies at home and in Afghanistan (30 million). 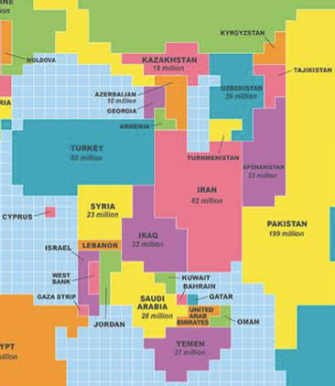 By 2015, Yemen (27 million) has almost caught up with Saudi Arabia (28 million), while Qatar and Bahrain make it on the map for the first time (both 1 million). Kuwait adds a million (3 million), while the United Arab Emirates grows Angola-style, doubling in size (3 to 6 million). But nobody comes close to the region’s biggest growers, Iran (plus 14 million, to 82 million) and Turkey, (plus 12 million, to 82 million). Even war-torn countries like Syria (18 to 23 million) and Iraq (26 to 33 million) manage robust growth – although it’s unclear whether everybody included in those numbers is in-country or living abroad as refugees. China and India are too huge to see on any other than the main maps above. The biggest absolute growth in population is found in these two countries: plus 56 million in China, to 1.36 billion inhabitants. China is still the biggest country in the world, population-wise, but its one-child policy has slowed down growth, especially compared to India, where such restrictions do not exist. India grew more than any other country in the last decade, adding 172 million. It now has 1.25 billion inhabitants, and will soon overtake China as the world’s most populous country. Interesting to see how Mongolia (3 million) is completely dwarfed by its neighbour to the south (and even by Russia to the north). Bangladesh is small, but very crowded (144 million) and Vietnam (84 million) is much more populous than you’d think. 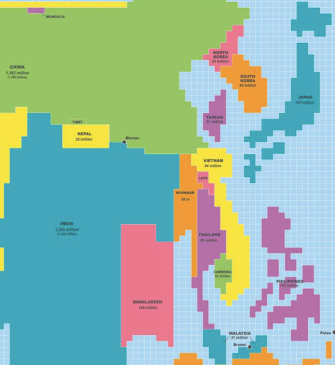 Even though China and India will take the biggest chunk of Asia’s population growth, other countries also will have grown significantly. The Philippines (88 million) adds another 22 million people to round the 100-million mark. Bangladesh grows by 25 million, and reaches 169 million. What a contrast to Japan, South Korea and Taiwan: these highly developed nations break even, staying put at 127, 49 and 23 million inhabitants. North Korea, on the other hand, adds 2 million, to reach 27 million. One of Asia’s biggest relative growers is Malaysia, adding around 30% to its population: from 24 to 31 million. 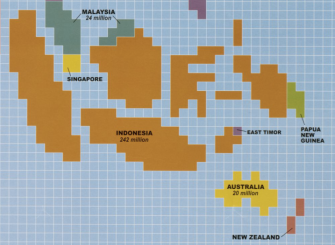 Most Pacific island nations have less than 1 million inhabitants, so they don’t appear on the map. And those that do make it, are dwarfed by Indonesia (242 million). East Timor (1 million), Papua New Guinea (4 million) and Singapore (4 million) are but drops in the Indonesian ocean. Even Australia (20 million) and New Zealand (4 million) look like wayward appendices to the archipelago in the north. 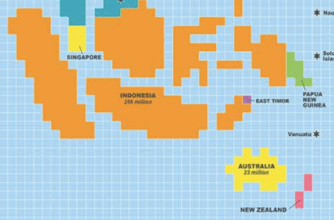 In 2015, those demographic relations are essentially maintained, and even exacerbated by Indonesia’s growth by 14 million – adding more than half an Australia (although it too grew by more than 10%, to 23 million). Remarkable how tiny Singapore added 50% to its population, and now boasts 6 million inhabitants.

Many thanks to Bob Abramms at ODT Maps for sending in these maps. Figures used are U.S. State Department projections. Zoomable images from the 2005 map found here at the Norman B. Leventhal Map Center at the Boston Public Library. Buy a copy of the 2005 map here. Have a look at the different options for the 2015 map here.

Related
The Present
How heat pumps of the 1800s are becoming the technology of the future
Innovative thinking has done away with problems that long dogged the electric devices — and both scientists and environmentalists are excited about the possibilities.
Starts With A Bang
JWST’s hunt for most distant galaxies gets double boost
Along with gravitational lensing and ALMA’s incredible long-wavelength spectroscopy, JWST is reshaping our view of the early Universe.
Thinking
Finding your essential self: the ancient philosophy of Zhuangzi explained
Adopting a healthy scepticism towards inherited ideas means “emptying the container of the Self.”
The Future
Startup’s bladeless flying car is designed to reach Mach 0.8
One of Jetoptera’s VTOLs is expected to reach speeds of around 614 mph, about as fast as a commercial jet airliner.
Health
New blood types are often discovered following medical disasters
New blood types are regularly discovered by an unusual absence or an unusual presence — both of which can result in tragedy.
Up Next
Culture & Religion
South Carolina Businessman Develops Live Game Show For Military Bases
Steve Sellery, owner of RisingTide Sports & Entertainment, designs experiential events and marketing programs. His latest venture is an interactive game show for military bases.