Despite talk of American decline, the U.S. still is the world’s only superpower – if by that you mean: the country with by far the biggest military footprint throughout the world.

These maps, produced at the end of last year by the Swiss Institute for Peace and Energy Research (SIPER), show the geographic distribution of foreign military bases for five countries with some of the largest defence budgets (1) in the world.

The United States spent $611 billion on its defence in 2016. According to this map, that kind of money buys you a military presence on every inhabited continent of the world. According to SIPER, the U.S. has 587 bases in a total of 42 other countries, in addition to 4,154 bases on its own territory, plus 114 bases in U.S. overseas territories. 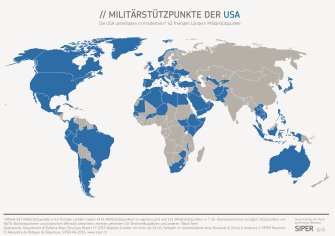 In the Americas, it’s easier to list the countries where the U.S. military is not present: Belize, Nicaragua and Costa Rica in Central America; Venezuela, Guyana, Suriname, Bolivia, Paraguay and Uruguay in South America; and Jamaica, Haiti and the Dominican Republic (and, to be fair, most of the region’s island nations) in the Caribbean. And yes, despite the decades of hostility with Cuba, the U.S. does maintain a base there: Guantanamo.

Same thing for Europe: listing the countries without an American military presence is easier – and more instructive: Ireland, Switzerland, Austria, Sweden, Finland: all neutral countries, outside NATO. Serbia and Montenegro: the former enemy from the Yugoslav wars in the 1990s. And of course Russia, and its satellite Belarus. A few decades ago this would have sounded surreal, but there are now American troops in Ukraine, Georgia, Armenia and Albania.

In Africa, the American military has a presence across the entire north, from Morocco to Egypt (and including Libya); in a few west African nations, including Burkina Faso and Niger; and in South Africa, Zimbabwe and Malawi. Remarkable: the cluster of countries in the Horn of Africa with U.S. military presence, from former no-go area Somalia all the way to war-torn South Sudan. Noticeable absence: central Africa.

Also: pretty much the entire Middle East, except Syria and Lebanon. And Iran, if you include that country in the region. But again in Pakistan, Afghanistan, Kyrgyzstan and Uzbekistan. If you were China, would that not feel like a link in the chain of U.S. military encirclement? That chain also includes Australia, South East Asia – from Indonesia all the way up to Vietnam and Laos – the Philippines, South Korea and Japan. 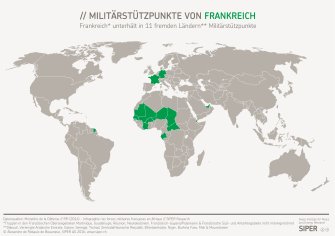 SIPER says both the UK and France have military bases in 11 countries – not all the same ones, of course. France’s military presence is focused on Africa – more particularly on a string of former colonies: from Senegal and Mauritania on the continent’s western coast via Mali, Burkina Faso, Ivory Coast, Niger and Chad all the way down to the Central African Republic.

Not contiguous, but also included are Gabon, near the equator; and Djibouti, strategically located at the southern end of the Red Sea. This vast area was once commonly called Françafrique, a term since abandoned because of its neocolonial overtones. Nevertheless, the French army still regularly intervenes to support governments and suppress rebellions.

A small corner of South America is also coloured French, and undoubtedly the armée française has soldiers stationed there; but this is French Guyana, an integral part of the French motherland rather than a foreign country (or even a colony). Two other French military outposts: Germany – since World War II – and, somewhat surprisingly, the United Arab Emirates. 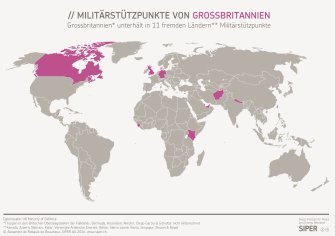 The UK also has troops in Germany, also since (and because of) the Second World War, and maintains a military presence in the UAE as well. Otherwise, there is no overlap, except that much of the UK’s military presence throughout the world is also distributed throughout its former colonial empire: Cyprus in Europe; Canada and Belize in the Americas; Sierra Leone and Kenya in Africa; Qatar in the Middle East; and Singapore and Brunei in Southeast Asia.

The presence in Afghanistan is of course due to the ongoing NATO-led fight against the Taliban. Nepal, strategically positioned between China and India, never formally was part of the British Empire, but was under strong British influence for most of the 19th century.

All of which adds up to 12 countries: SIPER does not count British troops in UK overseas territories such as the Falklands, Gibraltar, Akrotiri (on Cyprus), Bermuda or Ascension, but does include Cyprus in the list of foreign countries in which British troops are stationed. Which means SIPER either undercounted (11 instead of 12) or miscounted (no UK troops on Cyprus outside its sovereign base areas). (UPDATE, reader comment: “The UK has military establishments on Cyprus, both inside and outside the 2 Sovereign Base Areas. The establishments outside of the SBA’s include a ‘signals unit’ that is virtually at the top of Mount Troodos”). 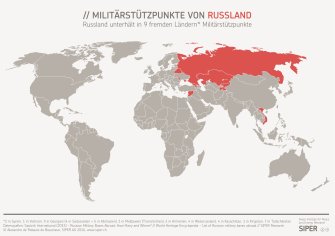 Russia maintains military bases in 9 other countries, many in the ‘near abroad’: former member states of the Soviet Union. These include, according to SIPER, two bases in Armenia, four in Belarus, four in Kazakhstan, one in Kyrgyzstan and seven in Tajikistan.

Russia also maintains bases in two other former Soviet republics, but without the permission of the local government: one in Transnistria, a breakaway republic in Moldova; and four in South Ossetia and five in Abkhazia, two separatist regions in Georgia. Further afield, Russia has one military base in Vietnam, and two in Syria. 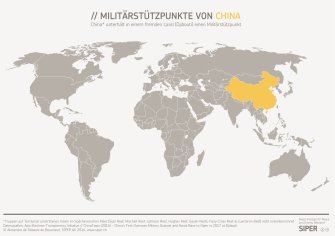 For all its grandstanding in the South China Sea, the armed forces of the People’s Republic have no other foothold outside China proper – except for Djibouti: not just China’s only military base away from home, but also in a tiny country that also hosts a French and an American military base. 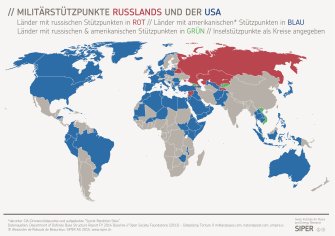 Djibouti is not the only country where soldiers from hostile powers are within shooting range of each other. This last map shows the American and Russian military presence throughout the world (in blue and red, respectively) – and the few countries in which they overlap (in green): Moldova, Georgia, Kyrgyzstan and Vietnam.

(1) While the Soviet Union outspent the U.S. on defence for at least part of the Cold War, America has undisputedly had the largest military defence budget in the world since the late 1980s. In 2016, the U.S. came in (way) ahead of China and Russia. Completing the Top 10 were Saudi Arabia, India, France, the UK, Japan, Germany and South Korea, in that order.

There’s an extremely good chance that there is, or at least was, life on Mars. But is it native to Mars, or did it originate from Earth?
Up Next
Starts With A Bang

Discovery of a young, dead galaxy creates a huge puzzle for astronomers

From the distant Universe, light has traveled for some 10.7 billion years from distant galaxy MACSJ2129–1, lensed, distorted and magnified by the foreground clusters imaged here. Image credit: NASA, ESA, […]