Cows and maps seem to have little to do with each other, but if you’re a butcher (or a committed carnivore), you know better. The quality of a meat cut depends on three things: location, location, location. For although cattle equals meat, not all beef is created equal. Some cuts are valued above others, and thus more valuable. Hence the importance of of mapping those zones of superior texture and taste.

Just like wine aficionados can taste the difference between a Bordeaux and a Bourgogne, and can place either on their mental map of France’s viticultural regions (sometimes up to the very vineyard whence they came), meat lovers know which part of the cow their brisket came from and where the porterhouse steak was cut. 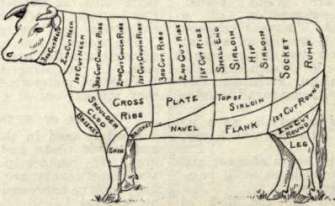 In one of the posts on Musings on Maps, a blog examining the “rhetoric of maps”, academic Daniel Brownstein zooms in on these so-called butchery maps, “distancing bovine forms by labeling, converting limbs beneath its skin to an ownable set of parts and taking possession by some alchemy of them as cuts, renaming the animal as the edible (…) In this butcher diagram, the cow becomes the territory”. 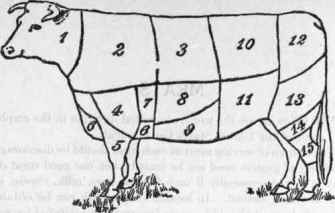 The territory is staked out with a few recurring subdivisions: chuck and rib for the top front quarter, loin and rump for the top hind quarter; brisket and plate for the bottom front quarter, and flank for the hind quarter. But these subdivisions are as movable and renameable as New York City neigbourhood nicknames (see #39). In contrast to the near-uniformity of the almost-always left-facing cow, the size, shape and name of the prime cuts seems to vary according to the necessity of detail, across cultures, and perhaps also over time. 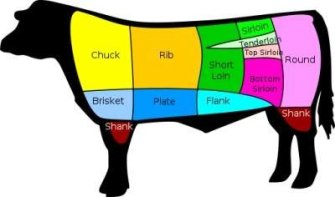 Even the most basic of maps will already subdivide the loin section, reflecting the primeness of the cuts found here: the short loin in front, the sirloin at the back, with the tenderloin floating somewhere in between. San Francisco’s famous Tenderloin District was named after the original but now defunct one in New York City, both being red-light districts representing the ‘soft underbelly’ of the respective cities (1). 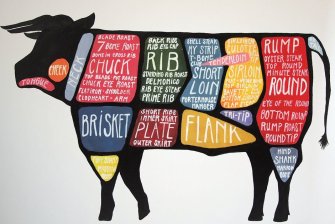 The cuts that land on your plate generally have a more precise definition; these terms merely serve as an appellation d’origine contrôlée (2), to continue the wine metaphor. This map delves deeper into the various meat regions, showing how a blade roast comes from the chuck, a delmonico steak from the rib, and an oyster steak from the rump. It also is a bit more comprehensive, mapping tongue, cheek and neck as exploitable territories, and even spotting the culinary potential of the so-called ox tail. 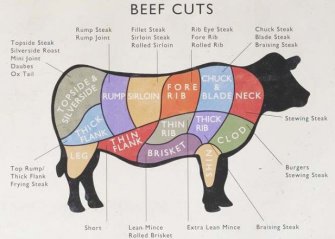 This map introduces a few new terms – topside and silverside, clod and forerib – seemingly displacing others to new locations: the rump moves quite a lot to the front. To make the confusion even greater, the animal faces right instead of left. 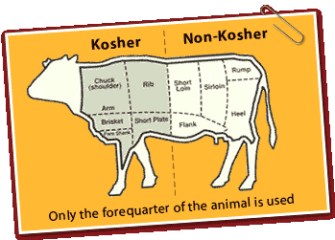 This striking map reveals the cultural impact of religion on mapping meat. According to the kashrut, the Jewish dietary laws, only the meat from the front quarters of cattle is edible; the hind quarters are not. So shoulder meat and brisket are kosher,  any loin cut or rump steak isn’t. 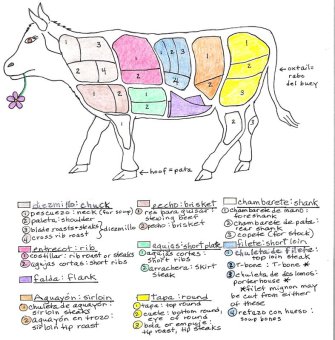 This Mexican butcher’s chart shows the complex subdivisions of the main meat regions, in many cases already indication which preparation they will be used for. The pescucho (neck), part of the diezmillo (chuck), is used for soup. The front part of the pecho (brisket) is for stewing. The bottom part of the agujas (short plate), the arrachera, is for skirt steaks, while the bola, at the bottom of the tapa (round) is for tip steaks. 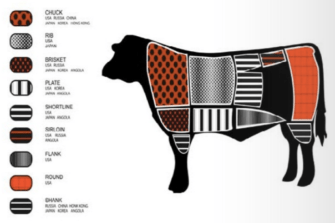 Another way to slice Mexican beef is not by type of cut, but by target country. This map shows the top destinations for the different parts of the animal. The chuck goes to the US, Russia, China, Japan, Korea and Hong Kong. The rib tickles American and Japanese palates. So does the brisket, plus the palates of Russians, Japanese and Angolans. Flank and round are destined solely for the States. But Russians and Angolans get their share of Mexican sirloin; and just about everybody but the Americans gets a piece of shank. 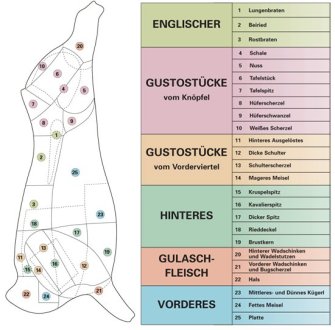 “Pride of place in the complexity of meatcuts may go to the Austrians, whose division of the carcass into 65 pieces suggests the survival of local ingenuity and refined taste, even if it is also informed by a unique whole-animal ethos”, writes Brownstein. This map shows less than half of that total, but it already distinguishes between your Hüferscherzel and your Hüferschwanzel, not to mention the Kruspelspitz and the Kavalierspitz.

In the modern era of mass production and streamlined distribution of food, the meat in our supermarkets has become almost entirely decontextualised. Consumers aren’t given much opportunity to see the connection between their food and the animals they once were. The cartographic portrayal of the origin of the various meat cuts has become correspondingly abstract, and essentially worthless. This could be a map of some city blocks, each specialising in the production of a specific type of meat. It takes a leap of the imagination to link this map to animals grazing in the field. 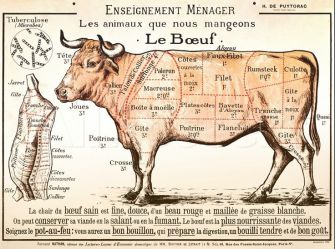 How far removed is this from the classic butchery map from the mid-19th century, when they were popularised along with the idea of fine dining. This map by Hylas de Pytorac, Chevalier de mérite agricole, shows the bull in all its glory, as one of the animaux que nous mangeons. But, as Brownstein mentions, bucolic images like these “were destined more for schoolkids than for butchers; primarily didactic in nature, they sought to preserve an agricultural knowledge in danger of disappearance”. Quod erat demonstrandum.

(1) An alternative etymology of the term ‘Tenderloin’ as used for a district of questionable morals refers to a remark by NYPD Captain Alexander ‘Clubber’ Williams after his transfer into the district in 1876. Noticing an increase in the amount of bribes offered for police protection,  he said: “I’ve been having chuck steak ever since I’ve been on the force, and now I’m going to have a bit of tenderloin”.

(2) A ‘controlled designation of origin’, an official certification that certain wines (but also cheeses, and other food products) did indeed originate in a certain area. An AOC both increases the perceived value of the product, and of its region of origin.

Related
Hard Science
Some earthquakes last for seconds, others for minutes — and a few for decades
What do you call it when the Earth shakes for three decades?
Sponsored
What childhood “money story” is shaping your financial behaviors?
Here are the signs that you inherited “money anxiety” from your parents.
The Present
The “maritime Indiana Jones” who salvages shipwrecks now wants to tow icebergs
Simple physics makes hauling vast ice chunks thousands of miles fiendishly difficult — but not impossible.
Neuropsych
Inside the brains of aging dogs
In a citizen science project, thousands of pet dogs are helping scientists to understand what happens to memory and cognition in old age.
Neuropsych
The most common source of awe might surprise you
It’s us.
Up Next
Starts With A Bang
The strongest gravitational show in the Universe
When you get enough mass together, Einstein’s theory of gravity causes space to act like a lens. Here are the results.“The first amazing fact about gravitation is that the ratio of […]