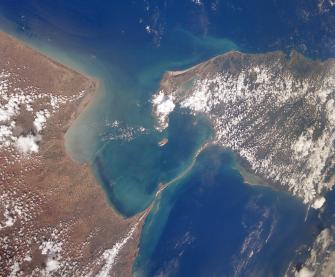 Adam’s (or Rama’s) Bridge between India (left) and Sri Lanka, as captured from the Space Shuttle Endeavour in 1994.Credit: NASA, public domain.

The string of limestone islands slung between India and Sri Lanka was once a bridge built by Rama to retrieve his wife held hostage on the island; or, it was crossed by Adam on his flight from Eden — depending on which epic you prefer.

To the north, the shallows of the Palk Bay eventually become the Bay of Bengal. To the south, the Gulf of Mannar is the antechamber of the Indian Ocean. Formerly fertile fishing grounds, both bodies of water are now hotbeds of a relatively recent kind of marine-based misdeed: sea cucumber crime.

As this map indicates, the number of criminal incidents in both India and Sri Lanka involving sea cucumbers has increased from no more than eight in 2015 to no less than 58 in 2020. In other words: it’s a crime spree!

While most cases are concentrated on either side of Rama’s (or Adam’s) Bridge, the most recent wave has also touched Lakshadweep, the cluster of small islands that constitutes one of the union territories of India to the west of its mainland (and on the left on this map).

Like their terrestrial namesakes, sea cucumbers are tubular creatures. But that’s where the comparison ends. Sea cucumbers are animal, not vegetal. Some grow up to six feet long. And while you can get a land cucumber for under a dollar at the supermarket, a kilo of sea cucumbers will easily set you back hundreds, if not thousands, of dollars.

Also known as sea slugs or sea leeches, sea cucumbers are a family of about 1,450 different species worldwide and are cousins to sea stars, sand dollars, and other echinoderms. Eyeless and limbless, they do have a mouth and an anus, and these they put to good use: by recycling waste into nutrients, they excrete key ingredients (to the tune of five Eiffel Towers’ worth per reef per year) for coral reefs and help slow the acidification of the oceans.

For centuries, sea cucumbers have also been a sought-after delicacy and used as a dubious medicinal ingredient in China and Southeast Asia. Sea cucumbers are eaten dried, fried, pickled, or raw; as an accompaniment to Chinese cabbage or shiitake mushrooms; spiced and mixed with meat or other seafood; and used in soups, stews, and stir-fries. In traditional medicine, they’re believed to help against arthritis, impotence, cancer, and frequent urination. They’re also used in oils, creams, tinctures, and cosmetics. 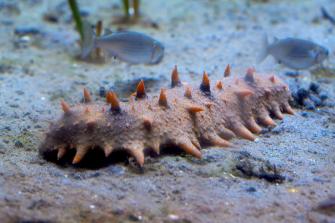 In the past, sea cucumbers were the preserve of the very rich, who presented each other with ornate boxes of the luxury product in dried form. However, the burgeoning of China’s middle classes since the 1980s has led to an exponential increase in demand, with ripple effects all over the world.

In the 1980s, a kilo of sea cucumbers (or bêche-de-mer or trepang, if you’re into the whole culinary nomenclature thing) would set you back about $70. Now, it’s closer to $300 and up to $3,500 for the rarer species — for example the Japanese sea cucumber, whose spikes make it look like a dragon.

Since then, global populations of the most expensive species have dropped by as much as 60 percent. As the net gets emptier, it is cast wider. From 1996 to 2011, the number of countries exporting sea cucumbers rose from 35 to 83. But the sea cucumber populations simply can’t handle that much strain. In the sea cucumber fields off Yucatan, for example, yields dropped by 95 percent from 2012 to 2014. And between 2000 and 2016, standing stocks of various sea cucumber species near the Egyptian Red Sea port of Abu Ghosoun fell by 87 percent due to overfishing. 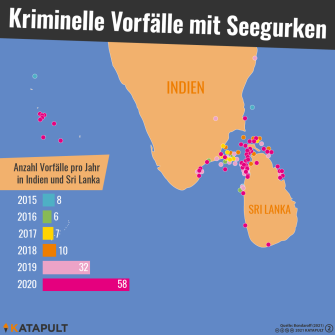 The sea cucumber crime wave has increased, both in numbers and area, now also reaching Lakshadweep (in the west).Credit: Phelps Bondaroff/Katapult Magazin, reproduced with kind permission.

As sea cucumbers get rarer, they get more valuable, which in turn encourages more illegal fishing. The average global price went up by 17 percent from 2011 to 2016. That drives the competition for the remaining specimens to dangerous heights — or rather, depths. According to the Central Marine Fisheries Research Institute in Kochi (Kerala, India), the species dwelling in shallow waters have been depleted to such an extent that divers are now targeting those in deeper waters. Without proper gear and training, that is potentially deadly. And not just in Indian waters. Back in Yucatan, at least 40 divers have lost their lives harvesting sea cucumbers, most from decompression sickness.

The situation in the waters off India and Sri Lanka is complicated by both countries’ different legal approaches to sea cucumber scarcity. In 2001, India banned the trade and export of sea cucumbers. As per Schedule 1 of the Wildlife Protection Act, they now enjoy the same level of protection as India’s lions and tigers.

Meanwhile in Sri Lanka, which has seen its sea cucumber grounds to the south and east collapse and shrink to just the northern side of the island, fishing for sea cucumbers remains legal but is subject to licenses to try to prevent overexploitation.

Having a legal market for sea cucumbers right next to an illegal one offers the “seafood mafia” two lucrative courses of action. First, harvest the dwindling stock of sea cucumbers right from under the noses of the Sri Lankan divers and fishermen. Second, smuggle the illegally caught ones from India into Sri Lanka, where they can be sold as if they were caught legally — a form of “seafood laundering,” if you will. 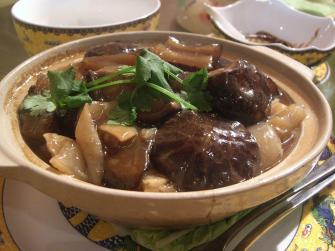 As the map shows, both countries are stepping up their efforts against sea cucumber crime. Moreover, in 2020, Lakshadweep inaugurated the Dr. K.K. Mohammed Koya Sea Cucumber Conservation Reserve. Centered on the Cheripanyi Reef, an uninhabited atoll, the 239-km2 (149-mi2) reserve is the first of its kind in the world.

The union territory also set up a Sea Cucumber Protection Task Force, which has seized considerable amounts of illegally harvested sea cucumbers, including a haul of 1,716 creatures weighing a total of 882 kg (almost a ton), which could have netted as much as 42.6 million rupees ($854,000) on the market.

Save the sea cucumbers!

While conservation efforts are commendable, the increasing scarcity and rising prices of sea cucumbers will continue to prove irresistible to the seafood mafia. There is some hope in aquaculture, with projects underway in China and elsewhere. However, only a small share of sea cucumber larvae make it into adulthood, a process that can last up to six years.

Sea cucumbers recently also have appeared on the radar of multinational pharmaceutical companies. It may yet turn out that some of their reputed medicinal qualities are more than just folk tales, and some chemicals they contain could help treat cancer and joint pain. It remains to be seen whether this additional source of attention will be a lifeline for the sea cucumbers or the kiss of death. 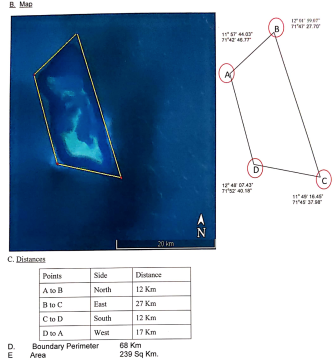 For more great maps, and to improve your German, check out Katapult Magazin (partially available in English).

Original data for the Katapult map from a paper by Dr. Teale Phelps Bondaroff, titled Sea cucumber crime in India and Sri Lanka during the period 2015–2020.

Drugs that stifle acute inflammation may prevent the body from healing properly.
Health

Protein fibrils accumulate in the brain during neurodegeneration. Cryo-electron microscopy has now uncovered fibrils of an unexpected protein.
Health

The Spanish language has the ability to minimize and exaggerate by the simple addition of a suffix.
Up Next
Starts With A Bang

This illustration of what a close encounter with an alien spacecraft might look like is an illustration only. No photographic or video footage of an unidentified flying object has ever […]