The Cape at the End of the World: Since time immemorial, the name and reputation of Cabo Finisterre drew in pilgrims from far and wide across Iberia, and from farther parts of Europe. The Christian pilgrimage grafted on that ancient tradition shortened the trip by some 90 km (55 mi), to Santiago de Compostela, inland from Galicia’s wild Atlantic coast.

The accolade was undeserved anyway: Continental Europe’s westernmost point lies about 460 km (app. 287 mi) to the south. Named rather more unassumingly, Cabo da Roca (“Cape Seastack”) sticks out 16.5 km (10.3 mi) farther into the Atlantic. At 9°30′W, it is Portugal’s and Europe’s westernmost extremity [1].

Located in the Parque Natural de Sintra-Cascais, about half an hour’s drive west of Lisbon, Cabo da Roca is a beautiful place: sandy beaches alternating with tall granite and limestone promontories. In the words of the 16th-century poet Luís de Camões:

(Here, where the land ends and the sea begins)

According to another, more contemporary Portuguese poet, this piece of land sticking out into the ocean is Portugal’s nose — and by extension, quite literally, the Portuguese coastline is Europe’s face.

Mensagem (Message) is the only Portuguese-language book published by Fernando Pessoa during his lifetime [2]. Pessoa is considered Portugal’s greatest 20th-century poet. The opener of the 44-poem symbolist epic, dedicated to Portugal’s place in world history, is an anthropomorphic description of Europe as a woman.

Europe lies, reclining upon her elbows:

From East to West she stretches, staring,

And romantic tresses fall over

The left elbow is stepped back;

The other laid out at an angle.

The first says Italy where it leans;

This one England where, set afar,

The hand holds the resting face.

Enigmatic and fateful she stares

Out West, to the future of the past.

The staring face is Portugal.

Thanks to the promontory at Cabo da Roca, Portugal’s coastline does look a lot like a human face in profile. Apart from geography, Pessoa might also have been inspired by cartography — more precisely by Sebastian Münster’s 1570 map of Europe as a queen.

That strange map (discussed in #141), with west on top, shows the Italian and Jutland peninsulas as Europe’s right and left arm; France and Germany as her chest; and Hungary, Bulgaria, and Scythia, among others, as the flows in her long red robe. Her head — this is what might have triggered Pessoa — was Hispania, in this case: not just Spain, but the entire Iberian Peninsula.

Geographic anthropomorphism, whether on maps or not, is not uncommon. Imperial Rome, and several world cities after her, has been described as Caput Mundi, literally “the head of the world” [3]. More spiritual centres like Delphi and Jerusalem were known as Omphalos Mundi: “the navel of the world.” But the phenomenon is not limited to Antiquity: give the map of Ontario a twist, and you’ll see an elephant (#340); and hidden in the shoreline of Istanbul is the face of the Sultan who conquered her (#586).

Pessoa’s poem inspired his fellow Portuguese artist José de Almada Negreiros to produce his own version of Europe — a map not limited by geographic reality, but corresponding to the symbolic persona taking shape in the poem. 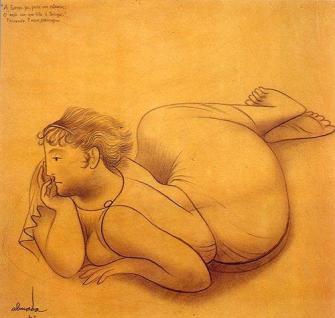 On that drawing, very little is reminiscent of the actual map, unless we start by that face, and find in the woman’s Greek profile more than a hint of Portuguese coastline. This Europe is stretching “from east to west,” like the continent itself. Nothing hints at the peculiar shapes of Scandinavia or the Balkans — neither of which is mentioned in the poem, of course. Those arms are mentioned: the left one is Italy, obviously. The right one — England? Yes, “holding the resting face,” as in the poem: Pessoa had received an English education in South Africa, and remained heavily influenced by English culture and literature throughout his life. Hence, perhaps, the proximity of England to Portugal.

Pessoa never saw this cartographic version of his poem, produced in 1943. He died in 1935, a year after the publication of Mensagem. Even though much of his work was still locked away in that trunk, enough of it had been published, in various magazines, to cement his reputation as one of Portugal’s greatest poets. He was granted a last resting place in Lisbon’s Jerónimos Monastery, close to Vasco da Gama, and to his 16th-century predecessor Luís de Camões.

Muito obrigado, Pedro Cabrera, for sending in this link to the drawing of Europe by Almada Negreiros. 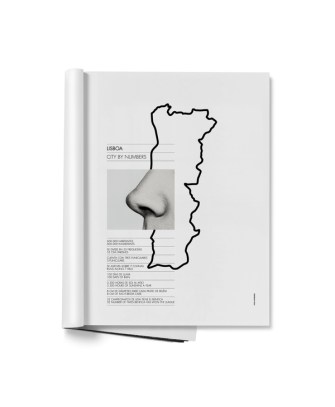 [1] In fact, when considering not Europe, but the entire landmass of which it is usually, but artificially de-merged, its opposite number is Cape Dezhnev, the easternmost point of Siberia, Russia and Eurasia — Alaska is only 82 km (51 mi) away, a short hop across the Bering Strait.

Related
Thinking
Finding your essential self: the ancient philosophy of Zhuangzi explained
Adopting a healthy scepticism towards inherited ideas means “emptying the container of the Self.”
The Future
Startup’s bladeless flying car is designed to reach Mach 0.8
One of Jetoptera’s VTOLs is expected to reach speeds of around 614 mph, about as fast as a commercial jet airliner.
Health
New blood types are often discovered following medical disasters
New blood types are regularly discovered by an unusual absence or an unusual presence — both of which can result in tragedy.
The neuroscience of loving music
Humans are musical animals four million years in the making, explained by music expert Michael Spitzer.
▸
8 min
—
with
Michael Spitzer
Life
Scientists use CRISPR to insert an alligator gene into a catfish
Disease kills off 40% of farmed catfish. This gene protects them.
Up Next
The Present
Big Think’s Top 25 +1 Videos
Mama, Don’t Let Your Babies Grow Up To Deny EvolutionIf adults want to deny evolution, sure. That’s fine. Whatever. But those adults better not make their kids follow in step […]