Tilt your map 90 degrees to the right, and the elephant reveals itself 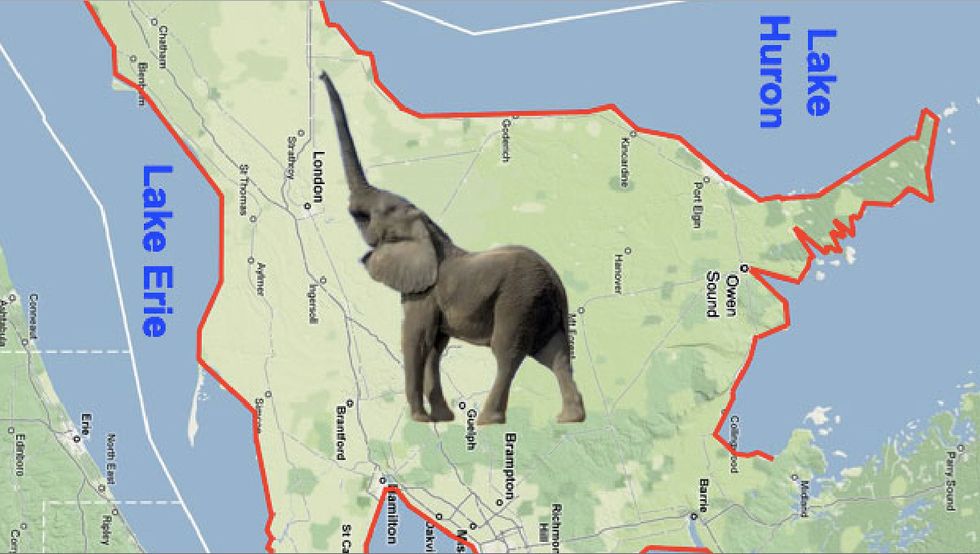 Elephants are native to Africa and India and… Canada? Well, not really, but if you tilt your average north-oriented map of Ontario 90 degrees to the right, the province’s southern peninsula will show a more than passing resemblance to an elephant, tooting its trunk.

This Southern Ontario Elephant gains added clarity due to the fact that the peninsula is bounded by lakes (Erie, Huron, Ontario, Simcoe) and other bodies of water, such as Georgian Bay and Niagara Falls.

”The only ones who weren’t amused by [the Southern Ontario Elephant] were those in rather unfortunately-placed Owen Sound which, much to our amusement, became known as The Elephant’s b*tth%le,” writes Dave Collins, who sent in this map.

For the record: Owen Sound has been known as the ‘Chicago of the North’ and ‘Little Liverpool’ and at present as ‘the Scenic City’. On the October 18, 2006 episode of The Colbert Report, host Stephen Colbert asked viewers to suggest bad things to say about Owen Sound, not being able to come up with anything himself. I guess he had never heard of the Southern Ontario Elephant, let alone the position of its posterior.

Finally, just for fun, here are 10 facts about elephants you might not know:

Strangely, the Southern Ontario Elephant is not the only example of a cartographically concealed pachyderm. Check out the Gold Coast Elephant here.