Draw two dots above a straight line, place them in a circle, and even children a few years old will spot the semblance with a human countenance. Whether it’s the features of Jesus on a piece of toast or Hitler’s mug in the facade of a house [1], we humans are hard-wired to see faces in places other than the front of people’s heads. Unwarranted facial recognition is a specific, and perhaps the most prevalent form of pareidolia – the suggestion of meaningful shapes by random stimuli [2]. 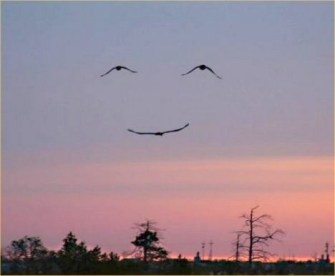 But it needn’t be faces we perceive; depending on our particular obsession (and the obviousness of the shape), it can be anything, from animal shapes in clouds over sacred texts in stone cracks [3] to the contours of countries in puddles, coffee stains and paint drips. Examples of ‘accidental geography’ are a popular segment of the maps submitted to this blog, and have been featured several times before [4].

There is more to be found at the intersection of cartography and pareidolia, however, than merely the shapes of countries. Zoomorphism – recognising the shape of animate beings in inanimate objects – is an age-old strain in cartography. Some of the oldest examples are the portrayal of Europe as a queen, or Asia as winged horse, both by the German mapmaker Heinrich Bünting [5], a more recent one is the ‘discovery’ of an elephant in the contours of southern Ontario [6], or of a bunch of animals (and animal parts, horresco referens) on the London Underground [7].

Why wait around for these zoomorphs to manifest themselves? Instead of passively gathering the most obvious specimens, why not actively hunt the ones that hide deep inside maps? That’s the idea behind the Norwegian Cartozoological Society, which defines cartozoology as:

The science or practice of discovering and studying animals outlined paradigmatically by street layouts as they appear on maps, especially with reference to physical evidence of the animals’ presence in the corresponding terrain.

We’ve discussed this exciting hybrid of cartography and zoology earlier on this blog [8], but unfortunately, the website of the Society has remained dormant ever since 2003. No new cartographic animals have been rolled out for a decade. Is cartozoology as dead as the proverbial dodo? Perhaps the maps shown below represent a more fertile strain of allocartography [9]. And why not? They fuse the age-old urge to see faces in strange places with some very modern facial recognition software.

These maps were generated using GoogleFaces, a software application developed by the Berlin design studio Onformative to seek out face-like features in random shapes, and then let loose on Google Maps.

We were driven by the idea, to explore how the psychological phenomenon of Pareidolia, could be generated by a machine. We wrote an algorithm simulating this tendency, as it continuously searches for face-like shapes while iterating above the landscapes of the earth. As a major inspiration we took a look at the Face on Mars [10]taken by Viking 1 on July 25, 1976.

That face, an eerily lifelike elevation in the Cydonia area of Mars, has generated a lot of speculation and controversy: Is it possible that humans (or humanoids) have left a marker of their ancient presence on the Red Planet? Later, better-quality pictures showed that the face-like picture was nothing more than the coincidental result of low-resolution imaging and some fortuitous imaging. 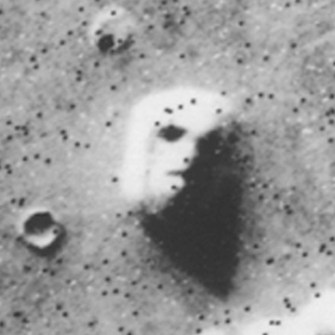 The Face on Mars, covered in dots that read, when connected: ‘Nothing to see here’. (found on this Tumblr page, also showing a more recent, non-facial picture of the same area in Cydonia).

Demonstrating just how powerful our instinct for pareidolia is – or how determined those Martian marker makers – are some other, lesser-known Faces on Mars: a ‘crowned face’ in the Libya Montes region, an ‘elephant face’ at Elysium Planitia, and even two ‘smiley faces’, one at Argyre Planitia, the other in the Nereidum Montes [11]. 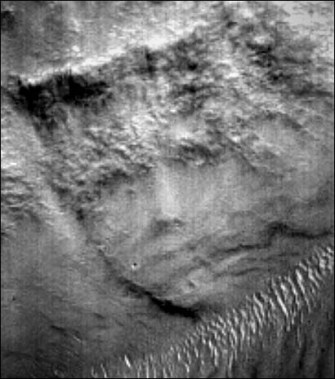 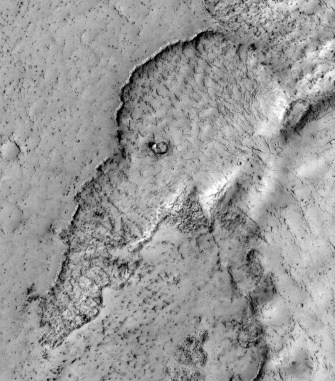 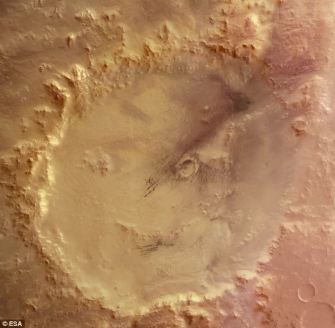 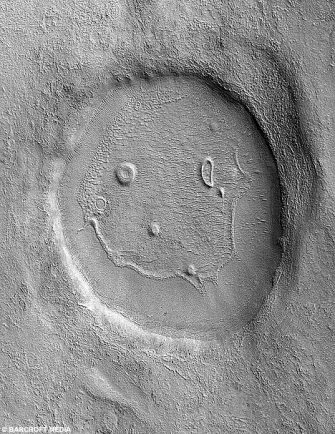 Saying cheese to the satellites, twice (see here and here).

But the Berlin experiment limits itself to our own planet. It asks: How many faces can we detect on Google Maps, by far the most detailed, most complete and most accessible topographical map of [Earth] ever?

The designers at Onformative wrote an algorithm mimicking the face-recognition tendency in humans, and let it loose on Google Maps images of the earth’s surface. The automated, standalone application, called FaceTracker, works its way across the planet through one zoom level, then starts over in the next one. The team at Onformative say they have been “astonished […] with [the application’s] versatile results”.

The hills are alive in Madagan (image taken from this page at the Onformative website).

The Onformative website provides a few examples already. The most stunning example undoubtedly is that of a right-facing, copper-green profile of a squint-eyed man, his fleshy lips planting a kiss on another mouth – horrifically detached from anything resembling a face. Judging from the data on the map itself, the picture was taken at 62.8492N,156.3910E [12], which is in the Magadan Oblast [13], in Russia’s Far East.

Like the Face on Mars, the Siberian Snogger’s resemblance to a human face seems too strong to be coincidental. But the landscape in this part of the world is almost as bleak and uninhabited as on Mars, and it’s hard to see who in time immemorial would have braved the elements to build a monument that would only be visible from the sky, through as yet not invented satellites [14]. In all probability, the Siberian Snogger is composed of a number of naturally occurring elevations, caused by fluvial and glaciofluvial [15] erosion along the the banks of the Indigirka River, as it winds its way north to the East Siberian Sea. 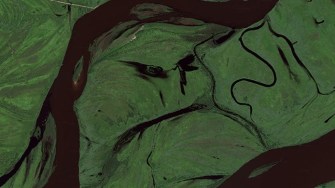 The apparition of a Pacman ghost in the Jewish Autonomous Oblast of Birobidzhan in Siberia (more on that geopolitical anomaly in #333).

For all of FaceTracker’s supposed computing power, scouring the face of the earth, the other results so far are less than spectacular. The Onformative team themselves admit that “some detected images aren’t usable at all, as we are not able to recognise any face-like patterns within the detected images”.

Perhaps facial recognition is like telling jokes, tickling and writing poetry: best left to humans. Because FaceTracker apparently hasn’t picked out a few faces that have already been noticed by humans. 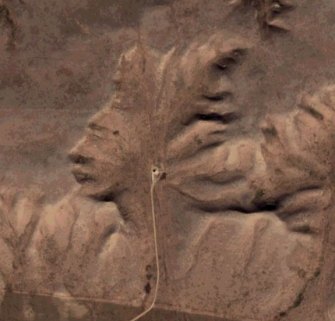 Probably listening to World Music – the Badlands Guardian in Alberta (found here on The Jetpacker).

One example is the Badlands Guardian, a landscape feature near Medicine Hat, in the southeast corner of the Canadian province of Alberta. The Guardian looks remarkably like a human head wearing Native American headdress – and instead of spoiling the appearance, a recent addition has only heightened the zoomorphism: a road and an oil well look like they’re the Guardian’s earphones. This remarkable geomorphological feature was discovered by a Lynn Hickox in late 2006, perusing Google Earth.

Other examples are the somewhat primitively drawn images of Jesus, and other Christian imagery, on an Arabian mountainside, or the profile of Ottoman sultan Mehmet II in the shoreline of Istanbul, the city he conquered in 1453 [16].

Also, it will be interesting to see whether FaceTracker will ‘see’ the face of Evita Peron in Ciudad Evita [17], the city named – and shaped – after that icon of Argentinian politics and folklore.

For now, my money is on the human element. We might have surrendered supremacy in chess to supercomputers, but I reckon that picking out faces from satellite images is still a people job. The mechanical headcount at the relevant Onformative page seems to have stopped. Here’s the chance to show the machines who’s boss: Send in those faces of earth!

The article on Onformative found here on the BBC news website.

[1] Just like you can’t un-ring a bell, this house in Swansea (Wales) will never again not look like Adolf Hitler, ever since the resemblance was first noticed in early 2011.

[2] To be human is to generate meaning, even where there is none. As such, pareidolia itself (perceiving shapes and forms where there are none, such as a Great Bear in the stars of heaven) is but a subset of apophenia: the perception of meaning in random patterns (e.g. associating ‘luck’ with certain rituals, or divine justice with natural disasters).

[3] For centuries, mysterious stone markings near Blekinge, Sweden were held to be an ancient runic inscription. These so-called Runamo runes were generally considered too time-worn to be legible, but in the 1830s, Icelandic scholar Finnur Magnusson managed to ‘translate’ them into an epic poem by the Danish king Harald Wartooth, imploring the gods for victory against the Swedish king Sigurd Ring. His findings were ridiculed, and the consensus ever since has been that the runes are nothing more than naturally occurring cracks in the rock face.

[6] See #340. And pity the inhabitants of Owen Sound, otherwise known as the Elephant’s Other Trumpet.

[9] ‘Different’ cartography. I just made that up.

[10] More on the Face here on Wikipedia.

[11] Smiley faces are among the most primitive, most effective forms of pareidolia. The ‘smiley face’ on Mars was referenced in the Watchmen comic (image taken here at Waterholes).

[12] Which is the decimal version of a location at latitude 62˚50’57” North, longitude 156˚23’28” East. Strangely, when feeding the decimal version into Google Maps in a version it accepts (i.e. 62.8492,156.3910), the new version only provides a zoomed out picture of the entire district, while the older version does pinpoint the exact location.

[13] Magadan Oblast is an administrative subdivision of Russia in the Far East of Siberia. Until 1953, it was known as the Kolyma (after a local river), and the final destination of untold forced labourers, many of whom died mining the region’s abundant minerals and precious metals. The region’s high density of Stalin’s death camps inspired Solzhenitsyn to write The Gulag Archipelago.

[14] And yet that would be the definition of the mysterious Nazca Lines, created by the eponymous South American tribe from the 5th to the 7th century.

[15] Or ‘fluvioglacial’. Both refer to the erosion caused by water in its frozen state.

Donate a kidney now, and your loved one will have priority status if they need one later.
Up Next

Last Sunday, June 23rd, I gave a lecture at the Sanderson Museum in Chadds Ford, Pennsylvania, titled “Art Made Personal: Chris Sanderson and The Wyeth Family.” Below is a summary […]