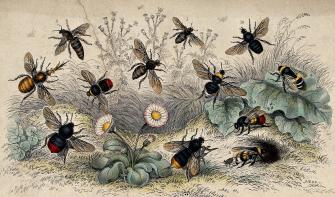 How many bee species are there? Wait a minute: honeybee, bumble bee, erhm… five? Five hundred? Five thousand? Not even close: the total is well over 20,000 – which means there are more species of bees than of birds and mammals combined.

There’s no shame (nor surprise) for bee civilians like you or me in not knowing that. What is surprising, is that even scientists who specialise in bees didn’t quite know how those species are distributed all over the world. Until now.

By combining and filtering more than 5.8 million public records of bee occurrences, a team of researchers from China, the U.S., and Singapore have built up the very first comprehensive picture of bee diversity worldwide. And that picture presents a few surprises, both for laypersons and specialists.

Bee ignoramuses will be surprised to learn that the United States is the throbbing heart of bee diversity. The U.S. has far more bee species than any other region on Earth. And by the fact that large tracts of Africa and the Middle East remain terra incognita, in terms of apiary diversity. 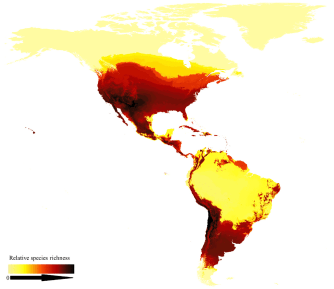 In general, there are more bee species in the Northern Hemisphere than the Southern and—confirming previous hypotheses–more in arid and temperate climates than in the tropics.

That goes against the common pattern in biology known as the ‘latitudinal gradient’, which predicts that species diversity (of most plants and animals) increases towards the tropics and decreases towards the poles. Bees are an exception, with a higher species concentration away from the poles (in what scientists call a ‘bimodal latitudinal gradient’).

It seems counter-intuitive that bees would thrive better in arid deserts than in lush tropical jungles; but that’s because trees–the dominant vegetation type in the tropics–provide less bee food than the plants and flowers that grow elsewhere.

Three ways of measuring species richness in the Americas: (A) richness of polygons, (B) sPCA and (c ) turnover. All suggest a large, distinct bee fauna in the southwestern U.S.Credit: Current Biology, open access

Also, bees don’t like it too wet, unlike their cousins the ants, whose populations peak in the humid tropics. The researchers think humidity may play a role in limiting bee distribution by spoiling pollen resources.

The relative absence of bees from the tropics has consequences for pollination, which in those regions is performed by a wide variety of alternative species: wasps, moths, and even cockroaches.

Previous datasets of global bee distribution were either inaccurate, incomplete, or difficult to interpret. This world map clearly establishes that bees prefer dry and temperate zones to wet and tropical ones. For bee scientists, it provides a much-needed baseline to predict the geographic distribution of bees and interpret the relative richness of species.

While much work needs to be done to fill additional knowledge gaps, this baseline is an excellent starting point, not just for greater understanding, but also for better conservation. Because bees are not just for making honey. In many countries, they’re the top pollinator species. And they typically visit 90 percent of the leading crop types. 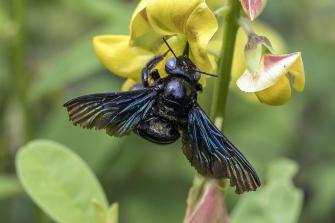 That trend is potentially disastrous for agriculture. More than $550 billion in annual global crops are at risk from pollinator loss. The loss of bees as pollinators would lead to a collapse in crop yields and even entire ecosystems.

Better understanding bees increases our options for protecting them. This study will help pinpoint bee diversity hotspots in otherwise poorly examined parts of the world and help predict how bees will react to climate change–for example when certain regions will get wetter weather.

Protecting bee diversity is especially important and urgent in developing countries, where many of the knowledge gaps are located, and where many crops rely on native bee species for pollination.

One of the best-known allegorical depictions of love has a rather pessimistic male twin.
Up Next
The Future

​’The time is now’ for cryptocurrencies, PayPal CEO says

Is Bitcoin akin to ‘digital gold’?