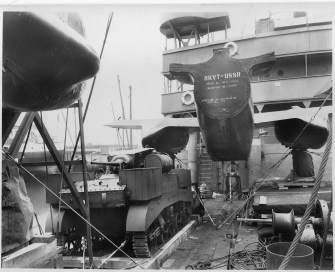 An M3A1 Stuart tank and part of an A-20 bomber hull shipped via polar convoy from the US to the USSR.

The US and the USSR were less than friendly before the Second World War, and deadly enemies soon thereafter; but during the conflict, they were allies in the fight against Nazi Germany.

Via the Lend-Lease Act, the US – with some help from the UK and Canada – supplied the Soviet Union with around $130 billions’ worth of supplies during WWII.

“The Americans gave us so many goods without which we wouldn’t have been able to form our reserves and continue the war”, admitted Georgy Zhukov, one of the Soviet Union’s most famous WWII generals. 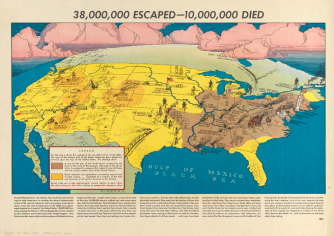 Bringing it home: Operation Barbarossa transplanted to the United States.

Operation Barbarossa in the US

For America, generating public sympathy and sustaining the costly support for its ideological opposite was both awkward and vital for the war effort. One obvious way to do this was to shift the focus from the Soviets’ alien ideology to the huge toll they were paying in the fight against Hitler – both in lives lost and lands destroyed.

This map literally brought home to Americans the devastating effects of ‘Operation Barbarossa’ – the Nazi codename for the invasion of the Soviet Union. As the legend to this map says: 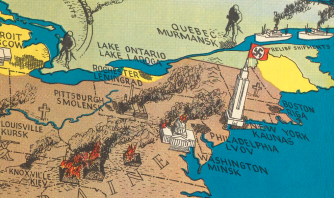 Boston is Riga, New York City is Kaunas, Philadelphia is Lvov and DC is Minsk. All are occupied by the Nazis. Rochester – a stand-in for Leningrad – is besieged but not defeated.

The siege of Rochester, NY

On this map is shown the vastness of the war effort of our Soviet Allies. The map of the western half of the Soviet Union has been placed (in reverse) upon the map of the United States. The shadings show: 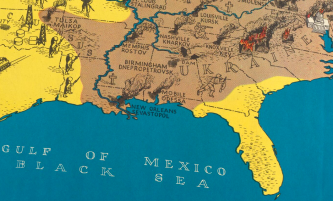 In their rush towards the Caucasus (spanning Oklahoma and Arkansas), the Nazis have occupied a large swathe of the South (Ukraine) from Knoxville (Kiev) to New Orleans (Sevastopol), but have not bothered invading Florida.

The legend goes on to explain:

Russian War Relief, Inc. 11 E. 35th St., New York City, presents this map to help Americans to visualize the almost inconceivable extent of the need for American aid to the people of the Soviet Union. From the vast invaded area of the USSR, here shown superimposed on a map of the United States, 38,000,000 Russians escaped the Nazis in 1941 by fleeing their homes. Strafed by dive bombers and machine-gunning “hedge-hoppers,” they fled across their country before the invaders while their Red Army fought and fell back – fought and fell back. 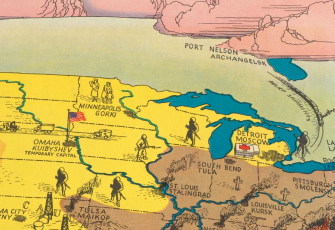 Because Detroit (Moscow) is dangerously close to the front line, the capital has been moved temporarily deeper into the country, to Omaha (Kuibyshev).

Omaha, capital of the USSR

In terms of the map of America, 38,000,000 persons walked and rode across more than half the United States. They left behind them – besides their homes – the lands which fed them, the mines which fed their factories, their clothing, their hospitals, their schools, their nurseries – in short, their lives. In the land to which they went there was almost none of these things. They built new factories first, ploughed the land second. Now they are building new homes.

But – even as we would be – they are often cold, often hungry, always physically exhausted. They need help. But the fate of those who escaped is not the worst fate in Russia. Forty million of the residents of the invaded area did not escape! They stayed. From forest hideouts they have seen the Nazis burn their homes, truck away their stores of food, their clothing, even their household equipment. Some, staying in their homes to meet the invaders, have been robbed of all they owned… and many have been killed. 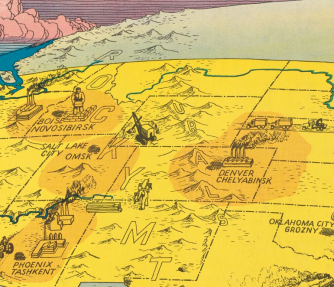 The Germans have seriously misjudged the strategic depth of the US/USSR: the Soviets have moved entire industrial zones safely away from the front, to Phoenix (Tashkent), Salt Lake City (Omsk) and Boise (Novosibirsk).

​By the time I get to Tashkent

Some of the survivors now are returning to homes recaptured by the Red Army. They return to almost utter desolation. They, too, need help. Ten million have died in the fight that is theirs and ours. The Red Army has lost almost as many men, in killed and wounded, as are now in all the American armed forces! Civilians have died – by millions – of malnutrition, cold, exhaustion, disease – and of the Nazi hangman’s noose and the bullets of Nazi firing squads. Hundreds of thousands of Soviet homes are sheltering the war’s orphans.

Look at the map. Imagine the tragedy to you and your family if an invader had ravaged America throughout all that shaded territory on our Atlantic seaboard, westward all the way to St. Louis and Tulsa. Because the equivalent of that tragedy has happened to millions of our Soviet allies, Russian War Relief, Inc., asks all Americans to help keep relief ships sailing. 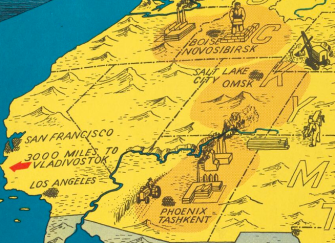 Did we say strategic depth? Where the US ends at San Francisco, the USSR went on for 3000 more miles, all the way to Vladivostok – Russia’s version of San Francisco.

Russian War Relief, Inc. was founded in New York City a month after Germany’s attack on Russia. It would grow to become America’s largest relief agency during WWII. Its chairman was Edward C. Carter, who among many other functions was secretary-general of the Institute of Pacific Relations – an organisation sometimes accused of being a communist front. One of RWR’s directors was journalist Fred Myers, who would go on to co-found the Humane Society in 1954.

Frank Lloyd Wright captured serenity in his masterpiece, Fallingwater, but his egotistical tendencies made life for others anything but serene.
Up Next
Hard Science

The dirty side of renewable energy

Our clean energy needs to be sourced responsibly right from the get-go.