So you’re a map nerd and you think you know about every cartographic anomaly in the world, from the bizarre Belgian enclave of Baarle-Hertog in the south of the Netherlands to the three little islands in the Beagle Channel that almost caused a war between Chile and Argentina. Then you learn about Market Reef, a little island between Finland and Sweden that is shared by both countries – and is the smallest island thus divided between two nations. The bizarre border on Market Island (Märkat in Swedish) was caused by the Finnish lighthouse that was accidentally built on the Swedish side of the border. It was transferred to Finland, while an equally large piece of the Finnish half became Swedish. The island is uninhabited, but is a favourite destination for radio enthousiasts, as it is listed as a separate country in amateur radio call numbering. 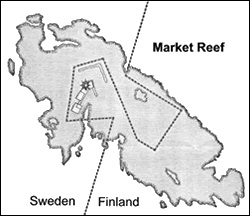 Here are its top priorities.
Health

The trial will test whether adding graphene to recycled asphalt can prolong the road’s lifespan.
Up Next
Guest Thinkers