The collapse of the Soviet Union was chaotic? You should have seen the start. After the Bolshevik party took power, the former Russian Empire descended into anarchy. Proper anarchy, with bells on. Only part of the vast land mass stretching from Polish border to the shores of the Pacific was under the effective control of the fledgling Communist regime (coloured darker pink on this map).

What happened in the rest of the country is conveniently termed a civil war between ‘Reds’ and ‘Whites’, with the former eventually crushing the latter. The reality was a lot more complex, covering a panoply of secessions, rebellions, counter-revolutions and foreign invasions.

Those circumstances gave rise to dozens of ephemeral states, mostly at the former Empire’s fraying edges. Some lasted only weeks, other several years. All were eventually absorbed into the U.S.S.R.

This map lists only 28. As map creator /u/pisseguri82 says: “I specifically omitted (states) that are still around – various Red, White, monarchist and others, or incarnations of them anyway (1). This is about the nations most people haven’t heard of”. 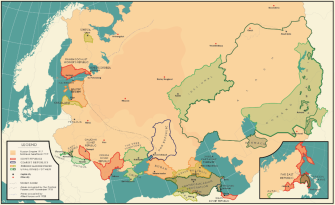 And what a bunch of delightfully obscure ephemerals they are. The map, recently uploaded to Reddit, shows their (sometimes overlapping) geographies, flies their (equally short-lived) flags and provides a glimpse of their (often bizarre) backstories.

“Some would say these are not all actual states, and that is kind of the point”, the mapmaker goes on. “The Kuban republic was internationally recognised and had ambassadors and a large army, Basmachi was a very loose organisation of guerrilla fighters, Naissaar was simply a band of corrupt soldiers with a freaky flag and Green Ukraine was never even properly declared independent”.

“Many other local governments lie somewhere on the sliding scale between a regional council that printed money and passed laws, and an actual independent government on the international scene. In the end, it’s a ‘what could have been’ map of Russia if the civil war had ended differently”. 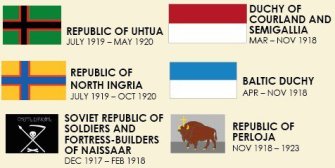 Let’s turn first to the northwestern corner of the former Empire, where the Republics of Uhtua and North Ingria were proclaimed by ethnic Finns hoping to join Finland, itself newly independent from Russia. By October 1920, both movements – each donned with a flag sporting the distinctive Nordic Cross – had been crushed. All North Ingrians were later deported to Central Asia.

Finland itself, or parts of it at least, saw the short-lived Finnish Socialist Workers’ Republic – a.k.a. Red Finland (1918). The mapmaker put several other short-lived Soviet republics on the map, but “since they all have the same all-red flag and pretty much the same story (Bolsheviks rose up, got overturned again), I focused on (ephemeral countries) with more colourful stories”.

In December 1917, the fortress on the Estonian island of Naissaar was commandeered by a few dozen Russian sailors, who proclaimed a ‘Soviet Republic of Soldiers and Fortress-Builders’, surely the only time the latter nomenclature was used for a socialist republic (typically said to be composed of ‘soldiers, workers and farmers’). The sailors set up a government and started collecting taxes from the locals. After two months, German forces chased them away. Stepan Petrichenko, the leader of the sailors, fled to Kronstadt, where in 1921 he would play a role in the unsuccessful Rebellion against the Bolsheviks.

Using the power vacuum towards the end of World War I, Baltic Germans proclaimed the independence of a Baltic Duchy and a Duchy of Courland. It was their ambition that both would be governed in personal union with the Kingdom of Prussia, thus effectively becoming protectorates of the German Empire. Courland was soon subsumed by the Baltic Duchy, which thus coincided with present-day Estonia and Latvia combined. The Duchy did not prove a viable option. When both Baltic countries declared their independence in the closing months of 1918, its window of opportunity had closed.

Numbering less than 1,000 inhabitants, the Lithuanian town of Perloja nevertheless made history when it declared its independence in 1918. Perlojos respublikas had its own court, police, prison and currency, the litas, as well as an army 300 men strong. It lasted until 1923. 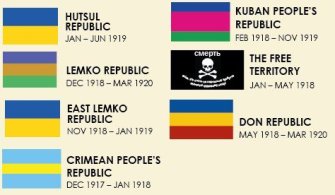 Originally part of Austria-Hungary, the Hutsul Republic declared independence with the intent of joining Ukraine. After WWI, it ended up in Czechoslovakia. It was independent for one day – March 15, 1939 – making it the shortest-lived state in European history. The Hungarians took over the next day. In 1946, it was annexed to (Soviet) Ukraine. Sometimes also referred to as Trans-Carpathian Ukraine or Carpatho-Ukraine, Hutsul is reputed to be the land that changed hands the most times during the 20th century (see also #57).

The Crimean People’s Republic was established by the local Tatar population at the end of 1917. The Crimea was subsequently overrun by Bolsheviks, Ukrainians and Germans, the Red Army, their White opponents, and finally, in 1921, the Red Army again.

The Don Cossacks raised an army of 50,000 against the Reds, which became a major part of the White resistance in the south of Russia. The Kuban Cossacks established a military government that gained recognition from both Germany and Turkey. Neither Red nor White, the Kuban Republic was overrun by the Red Army in 1919. The Free Territory was an anarchist collection of local councils, under the protection of Nestor Makhno’s rogue army. After a period of tolerance for the state, the Reds turned against Makhno, who escaped to Paris, where he ended his days as a stagehand and Renault factory worker. 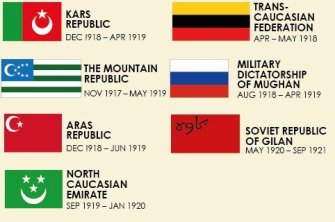 In the Caucasus, the situation was – as always – extremely complex. In November 1917, a local oil baron united Chechen, Ingush and Ossetian peoples in a Mountain Republic, allied with Germany. The Republic had the distinction of being defeated by both sides in the Russian civil war – first by the Reds, in March 1918, then by the Whites, in May 1919.

The Transcaucasian Federation was formed in April 1918 to counter Turkey’s claims in the region. As Turkey advanced, the Federation fell apart within a month. Following a British proposal to cede the area to Armenia, a local Azeri officer in December 1918 proclaimed the Aras Republic, aligned with Turkey. The Armenians overran it in June 1919.

Ruled by an emir aligned with the Ottomans, but dependent on the Reds for military support, the North Caucasian Emirate turned into a Soviet republic upon the emir’s death. The Kars Republic was an Ottoman puppet state, invaded by the British in 1919. Their ceding control to the Armenians contributed to the start of the Turkish-Armenian War.

The military dictatorship of Mughan was led by a White general and supported by an expeditionary force composed of British, Canadian, Australian and New Zealand troops; while the Soviet republic of Gilan saw the revolutionary fervour catch fire in northern Iran, only for the Soviets to withdraw their support, leading to the state’s swift collapse. 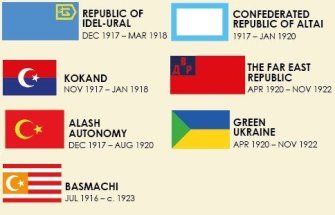 The Republic of Idel-Ural was founded as the homeland for some of the diverse non-Russian nationalities in the area, including Tatars, Bashkirs and Volga Germans. Despite the enormous territory claimed by the Republic, it in fact only ever controlled parts of Kazan, its prospective capital.

The massive territory claimed by the Kazakh-led Alash Autonomy was mostly held by Red and White forces. The Basmachi movement, initially a revolt against conscription, claimed sovereignty for Central Asia’s Muslims. Going one step further, the Kokand movement sought to restore the eponymous Khanate – but was defeated by the Red Army after merely three months.

The Confederated Republic of Altai saw itself as the first step towards the re-establishment of Genghis Khan’s empire. It lasted little more than two years.

‘Green Ukraine’ was nowhere near actual Ukraine. Nevertheless, the Siberian Ukrainians who founded the state foresaw a union with independent Ukraine. Green Ukraine never really took off, and then was taken over by the Red Army in 1922.

Encompassing the entire Pacific seaboard of the former Empire, the Far East Republic was set up by the Soviets themselves to serve as a buffer against Japanese expansionism in Siberia. The Japanese withdrawal, and the Red Army’s subsequent capture of Vladivostok in November 1922, marked the end of the civil war.

Not mentioned on this map are, among quite a few others, the provisional All-Russian Government set up by Admiral Alexander Kolchak; ‘Mad Baron’ Roman von Ungern-Sternberg’s short rule over Mongolia as an independent warlord; or the Moldavian Democratic Republic, just to the east of present-day Moldova.

As becomes apparent in the comments section at Reddit, the map of these ephemeral states, even though incomplete, is a big hit with both Russophiles and cartophiles (not to mention flag nerds or alt-history fans):

Mark Zuckerberg’s testimony to congress begins today. What will he say?

“In modern politics, even the leader of the free world needs help from the sultan of Facebookistan.” ― Rebecca MacKinnon