Long gone are the days when Clapham was a small, rustic village well beyond the gates of medieval London. Also gone, but less long, is the era of Clapham as a fancy suburb fashionable with the upper classes, whose rows of mansions skirted the windy expanse of Clapham Common. We’re talking late 18th, early 19th century here. The area has since gone down in the world. A lot of those mansions are gone, and Clapham these days is a mere district of London, albeit still a not too unpleasant one, thanks in part to the enduring green oasis that is Clapham Common. 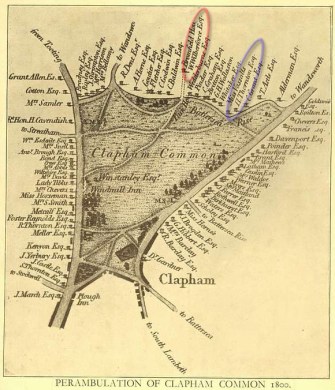 This map, dated 1800, depicts the common at what may have been its high society high-water mark. These were the days of the Clapham Saints, a loose association (1) of agenda-setting Anglicans. They were wealthy businessmen promoting abolitionism, prison and debt reform, and other emancipatory causes. Centred on William Wilberforce (1759-1833), whose Bromfield House is the only residence mentioned by name (and circled red) on this map, the Saints were instrumental in pushing through Parliament the Slave Trade Act (1807) and the Slavery Abolition Act (1833), respectively banning the trade in slaves, and slavery itself throughout the British Empire.

These people were, in a sense, the original liberal do-gooders. And their triumph was not just legal, but also moral: nobody in their right mind could envisage a return to the world before they changed it. They were also overtly pious, and ostentatious morality became another feature they impressed upon the Victorian Age.

This Perambulation of Clapham Common was part of cartographer C. Smith’s ‘Actual Survey of the Road from London to Brighthelmston’ (2). It shows the residences of the notable Londoners adjoining Clapham Common, then Ground Zero for the Clapham Saints, although not all of the notables shown living there were associated with it.

Take for instance Henry Cavendish (1731-1810), shown occupying a house at the upper left hand side of this map. An aristocrat by birth and incredibly shy by nature, Cavendish also was a versatile scientist, discovering hydrogen (which he called ‘inflammable air’), and measuring the density of the Earth. Reclusive to the extreme, Cavendish reputedly built a staircase at the back of his house to  avoid his housekeeper. No wonder he lived in the most widely-spaced row of villas adjoining the Common.

Because of his noble descent (3), Cavendish is referred to as Rt. Hon. (Right Honourable) on the map. Most of his neighbours – indeed, almost all of those who are not mentioned as a Miss or Mrs – are endowed with the honorific suffix Esq. (Esquire), a way of distinguishing upper from lower gentry (who had to content themselves with being labeled Gen. [for Gentleman], which was still better than Mr [for Mister]). We could therefore conclude that the haute bourgeoisie surrounding Clapham Common owed their positions of privilege more to the new money they made than to the old titles they inherited (3). Those old titles probably sought refuge in their country estates from the vulgarity of these upstarts.

Between Tooting and Wandsworth Ways, at the top of this map, are, left to right: Bradney Esq., Ripley Esq., J. Shrimpton Esq., Mrs Harrison, Mrs Bellamy, R. Dent Esq., A. Horne Esq., Goutier Esq., Fletcher Esq., C. Godwin Esq., and C. Baldwin Esq. Set back from the other houses then is Bromfield House, the aforementioned residence of William Wilberforce.

Circled blue, this is the residence of Henry Thornton (1760-1815), possibly related to the other two Thorntons mentioned above. Henry was a banker, MP and ‘co-founder’ of the Clapham Sect. He played a pivotal role in the Sierra Leone Company, which established a colony for freed slaves in Africa, and furthered Christian missionary work in Africa and the East. He also was the great-grandfather of the writer E.M. Forster (1879-1970).

His neighbour, mentioned as C. Grant Esq., may be Charles Grant (1746-1823), chairman of the British East India Company, also an MP and member of the Sect. He led  an unsuccessful campaigner for Britain to allow missionaries throughout India and thus uphold its ‘duty’ to convert India to Christianity.

The last two houses in this row are those of  T. Astle Esq., Alderman Esq.

After the turn-off  to Battersea Rise: Miss Horne’s, J. Brogden Esq., G. Hibbert Esq., Mrs Barclay, R. Barclay Esq., and finally, isolated in the bend of the road, the house of Dr Gardner.

As they all belonged to the same social circles, most of the people mentioned on the map would have known the names of all the other people who lived around Clapham Common. The place looks like a small-town idyll, right under the smoke of London. Or it might have been a gilded cage, stifled by groupthink yet unaware of its own proto-Victorian intolerance. Maybe both.

Clapham Common today is a triangular park of 220 acres (890,000 m2, or 89 hectares) straddling the London boroughs of Lambeth and Wandsworth, containing historical Eagle, Long and Mount Ponds – none of which are apparent on this map – and the more recent Cock Pond. Its shape has remained largely the same, but you’ll have to twist this map around to compare: C. Smith’s depiction of the common is oriented towards the southwest (possibly because that would be the lay of the land while travelling from London to Brighton).

So the houses on Henry Cavendish’s side of the Common are actually on the south side, Wilberforce e.a. are on the west side. The road pointing towards Battersea Rise (between Scholey Esq. and Mrs Horne’s) leads almost due north.

Most of the other luminaries living just off Clapham Common anno 1800 have slipped into obscurity. Biographical information on any of them is welcome (as will be a map of this Perambulation that is a bit more hi-res than this one, taken here from The Partleton Tree, a genealogical website for the family of that name).

(1) Nevertheless sometimes also referred to as the ‘Clapham Sect’.

(2) Brighthelmston (occasionally: Brighthelmstone) is the ancient name of the seaside resort of Brighton. I am unaware of when the name was officially changed. More recently than I thought, apparently.

(3) Quite literally: his grandfather was the 2nd Duke of Devonshire, his father was a mere Lord. I’m unsure what that makes Henry himself, titularily.

(4) The fact that some Esquires are mentioned with their initials, while others are referred to by their last name only may indicate a further, subtle class distinction.

Is Autism a Male Disorder?

Four out of five autism sufferers are male. Are fundamental male-female brain differences causing the gap?