Hotspots of witchery in Central Scotland.

Looking for a witch but don’t know where to find one? This map will help. It pins more than 3,000 people accused of witchcraft to a map of Scotland. It’s the Grand Register of Scottish Witchcraft that you never knew you needed.

But only if your interest is purely academic. You can’t call or write them to cast a spell on your behalf, because they’re all dead and gone. And not just because many were executed. This Map of Accused Witches geo-locates the entries in the Survey of Scottish Witchcraft database (SoSW), which covers the period between 1563 and 1736.

In other words, the map covers more than 170 years of government-sanctioned witch hunting and killing in Scotland. For a state with a religious point to make, prosecuting witchcraft was an excellent way to prove its godliness.

Places of residence of accused witches in the Greater Edinburgh area.

Mark of the Devil

In that period, more than 3,200 people were publicly accused of being witches in Scotland. Whether motivated by religious zeal or naked opportunism, witch-hunting was pursued with remarkably more fervor in Scotland than in England.

The alleged witches in the database defy the stereotypes that later times have conferred on them. They are neither all female (15% were men), nor particularly old (half were under 40). They were also not typically widowed, nor all poor outsiders (most were ‘middle class’, some were nobility), nor generally practitioners of folk medicine (only about 4%).

A conviction could result from confessions – by the suspects or by other witches – or if the Devil’s mark was found on the body of the suspect. The Devil was believed to ‘mark’ his followers when they made their pact with him, detectable either as a visible blemish or an insensitive spot. ‘Witch-prickers’ used pins and knives to find those spots, and thus identify the suspects as actual witches. There are known to have been at least 10 professional itinerant witch-prickers in Scotland at the time. 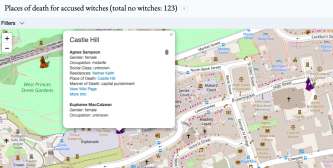 23 witches were executed at Castle Hill in Edinburgh, four more just down the road, at Mercat Cross (to the right).

One of the most effective and most frequently used forms of torture used on accused witches was sleep deprivation; it leads to hallucinations, which is a very helpful tool for obtaining confessions. Physical torture was relatively rare.

Only for a relatively small sample – 55 cases – are methods of torture mentioned, which included: forcing the accused to wear haircloth, whipping them, binding them with ropes, hanging them by their thumbs, placing them in iron and stocks, putting them in cashielaws (a.k.a. the ‘warm hose’: iron leg encasings which were heated until the legs began to roast).

A further 98 fled from prosecution. The first figure above seems to suggest that about two thirds were executed. For the entire group, that would mean more than 2,000 witches executed. But researchers say the sample is too small and atypical for that kind of conclusion. 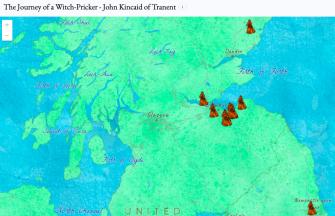 John Kincaid was mainly active around Edinburgh, but ventured as far south as Newcastle, in England, and as far north as Brechin. There, in April 1650, Kincaid found the devil’s mark on the body of Catharin Walker. She had been accused of unorthodox religious practise. And it was said she had kicked a man in the groin who had subsequently died; that people suffered after she quarrelled with them; and that she had confessed to having suffocated and poisoned her own children. She did not immediately confess, but in prison admitted that she had pacted with the Devil, in the shape of a cat.

In order to unlock the data contained in the SoSW database, the University of Edinburgh in 2018-19 launched a project to locate and visualise the various places it recorded. It was the first time this dataset of alleged Scottish witches had been geo-located so exhaustively.

Mid-2019, Emma Carroll, a Geology and Physical Geography undergraduate student, was taken on board as ‘witchfinder general’: to locate the witches on the map of Scotland. “Before the internship I had barely even heard of Haddington and now I know that it is the witch capital of Scotland,” she remarked on the blog detailing her progress.

Carroll had to find locations for which the name or spelling had changed dramatically, or which had disappeared off the map altogether. Her detective work involved scouring old, detailed Ordnance Survey maps and even older maps of Scotland, contemporary to the witch trials, including the Blaeu Atlas of Scotland (1654).

Carroll’s work consisted not only of geo-locating the places of residence, detainment, trial and (if applicable) execution for the accused, but also of pinpointing locations for the more around 2,000 other people associated with the trials – ministers, sheriffs, and others.

The detective work also shed some new light on some of the cases, like that of Marie Nian Innes, of the Isle of Skye. The fact that she was accused of witchcraft may have had more to do with local politics; specifically, with the new local clan chief Ranald attempting to assert his authority.

Carroll prepared various maps based on the information at her disposal, including one ‘story map’, on John Kincaid, “a notoriously evil witch-pricker” from Tranent. Kincaid was involved in 17 cases – in one of which he was the accused. 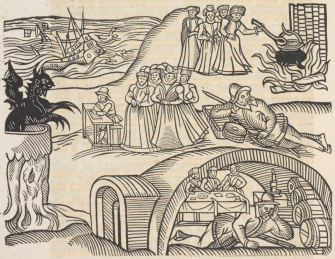 Devil’s sermon and witches’ brew – one of the few contemporary illustrations of Scottish witchcraft.

One of the focal points of the map is North Berwick, which was the scene in 1590-91 of the infamous North Berwick Witch Trials, presided over by King James IV of Scotland himself. The trials were discussed in the anonymous pamphlet Newes from Scotland, published in London in 1591. It contains the only contemporary illustrations of Scottish witchcraft. One of them is this woodcut (above), which shows:

Newes from Scotland was probably written by James Carmichael, the minister of Haddington. He both helped interrogate the North Berwick witches and advised King James on writing his Daemonologie (1597). 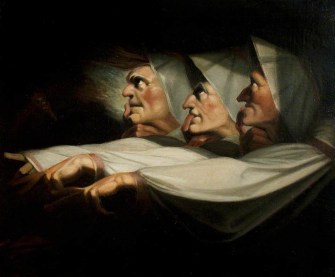 Written a few years before he authorised the Bible translation with which King James has become synonymous, Daemonologie contains three philosophical dialogues that deal with demons, magic, sorcery and witchcraft. The work explains why it is right that witches should be persecuted in a Christian society.

It is thought that Shakespeare used Daemonologie as source material for Macbeth (1606) – set in Scotland and featuring three Weird Sisters – witches whose rituals and quotes would not altogether have been out of place in Newes of Scotland.

Daemonologie influenced later witchfinders (and their manuals), including Richard Bernard (A Guide to Grand-Jury Men, 1629) and Matthew Hopkins (The Discovery of Witches, 1647). 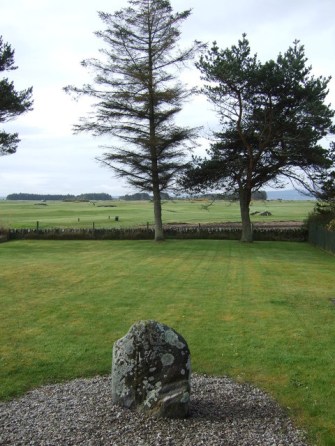 The Witchstone in Dornoch marks the presumed spot where the last witch in Britain was executed.

A witch in the garden

Women had been persecuted as witches for much longer than the period described by this map; but its end date coincides with the end of government-sanctioned witch-hunting.

Executed in 1722, Janet Horne was the last person to be legally killed for witchcraft in Scotland – and in fact the entire British Isles.

Janet, who was showing signs of senility, and her daughter, who suffered from deformities on her hands and feet, were turned in to the authorities by their neighbors.

They accused Janet of riding her daughter to the Devil, to have him shod her like a pony. Both mother and daughter were quickly found guilty by the local sheriff, who sentenced them to be burned at the stake.

The daughter managed to escape, but Janet was stripped, tarred, paraded through town and burned alive. The Witchstone, in the private garden of a house in Carnaig Street in Dornoch (Sutherland) still marks the presumed spot of her execution.

Tags
christianhistorymapreligionviolencewitchcraftwomen
In this article
christianhistorymapreligionviolencewitchcraftwomen
Related
The Past
How the death of alchemy gave birth to modern science
Far from practicing witchcraft, the experimentation of medieval alchemists helped bring about the Scientific Revolution.
Thinking
Finding your essential self: the ancient philosophy of Zhuangzi explained
Adopting a healthy scepticism towards inherited ideas means “emptying the container of the Self.”
Health
New blood types are often discovered following medical disasters
New blood types are regularly discovered by an unusual absence or an unusual presence — both of which can result in tragedy.
Hard Science
200 years of exploring Antarctica
What we’ve learning from the world’s coldest, most forbidding, and most peaceful continent.
High Culture
The most controversial painting in Russian history
Created in the 1880s, “Ivan the Terrible and His Son Ivan,” which depicts a father murdering his son, divides Russians to this day.
Up Next
Health
To prevent coronavirus don’t touch your face – but how can you avoid it?
Is there anything we can do to help us give up this habit?