North Korea is the Dark Side of the peninsula, literally. 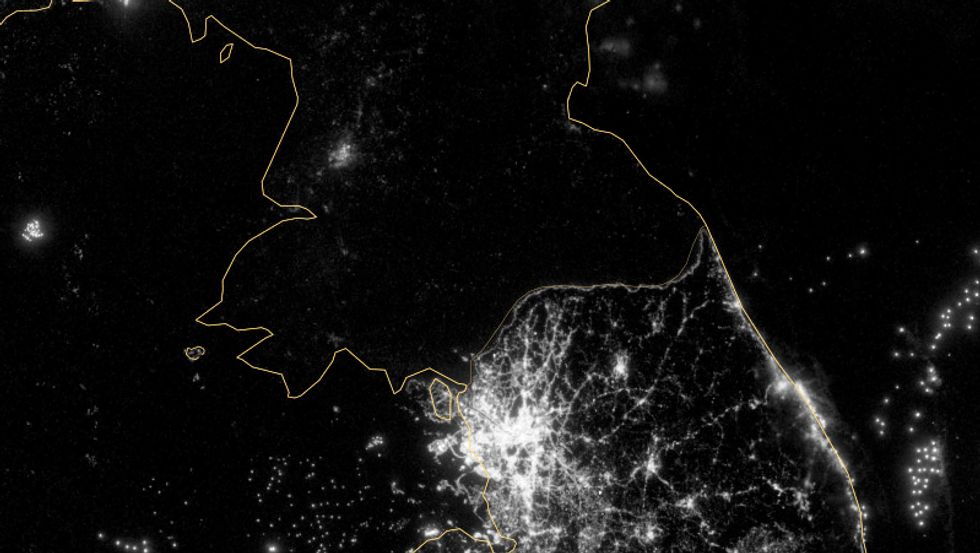 North and South Korea have been separated at the 38th parallel ever since the Korean War (1950-1953), which has never officially ended. In the ensuing ‘ceasefire’, North Korea developed into a communist dictatorship with a centrally planned economy, while South Korea became a capitalist democracy with a free market economy.

Economic hardship in the officially ‘self-reliant’ North has led to mass starvation, while the South has a vibrant economy able to compete with the best of the world. In 1996, the per capita GNP in the North was $920, while it was $11.270 in the South. A 1999 estimate of per capita GNPs put the South’s at 13 times that of the North. More recent figures will probably show an even wider gap.

Due to the different economic results on either side of the Demilitarized Zone, the ethnically quite homogenous Koreans have even begun to diversify physically, with the average North Korean male almost 7 cm shorter than his Southern counterpart (165,6 cm vs. 172,5 cm). North Korean females are on average 4 cm shorter than Southern women (154,9 cm vs. 159,1 cm). By 2025, the height difference is projected to increase to 11 cm for men, 6 cm for women. Unless the North’s economic situation changes drastically, that is.

So the South dwarfs the North, not just numerically (50 vs. 27 million), but also economically and even size-wise. Another stark reminder of the different worlds both Koreas now inhabit, is this map, a picture of the night-time illumination on the Korean peninsula.

The metropolitan area of Seoul, the South’s capital, holds 23 million people and is the second-largest conurbation on the planet (after Tokyo). Its huge lit-up area, close to the border with the North, is clearly visible from space. Other Southern cities, while quite a lot smaller than Seoul, are also clearly distinguishable on this satellite map, for example Gunsan on the western coast, directly below it the inland city of Gwangju, the cities of Masan and Busan on the southern coast, and several other cities, much smaller still.

By contrast (quite literally, even), the only speck of light north of the DMZ is the North’s capital of Pyonyang, a single, neat pinprick of white punched through an otherwise completely black canvas. The minimal lighting belies the fact that Pyongyang is home to an estimated 3 million people. Gunsan, in the South, has under 300,000 inhabitants.

There is only one bright side to this darkness that I can think of: North Korea must be a fantastic place for stargazing…

This NASA map was sent in by Isak Asgeirsson.