In an unprecedented meeting on Tuesday between leaders of the U.S. and North Korea, chairman Kim Jong-un has agreed to the “complete denuclearization of the Korean Peninsula” and to “the building of a lasting and robust peace regime on the Korean Peninsula.”

President Donald Trump, for whom disarming the reclusive nation has been a key foreign policy goal since taking office, called the summit in Singapore “very successful.”

The summit began with a handshake between the two leaders.

It was a delicately choreographed moment. In front of a throng of clicking, flashing cameras aimed by some of the 2,500 reporters who had traveled to the island of Sentosa to cover the summit, Trump and Kim strode out from opposite flanks of a red-carpeted stage, met in the middle, and shook hands for about 10 seconds. Then they faced the cameras, paused for a long moment, and walked off, leaving the stage empty except for its backdrop: a line of North Korean and American flags arranged side by side.

“It was not easy to get here,” Mr. Kim later told reporters. “There were obstacles but we overcame them to be here.” 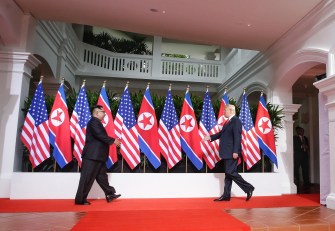 Trump maintained a positive tone throughout the day.

“I feel really great,” he told reporters. “It’s gonna be a great discussion and I think tremendous success. I think it’s gonna be really successful and I think we will have a terrific relationship, I have no doubt.”

On the way to lunch, reporters shouted questions asking how things were going.

While the leaders met, diplomats from both nations were reportedly working out details of a joint statement. It reads:

After the hours-long summit, Trump declared it had been “very successful,” and that Mr. Kim has a “great personality.”

“We’re prepared to start a new history, and we’re ready to write a new chapter between our nations,” the president said.

The U.S. and North Korea have already agreed, in some form, to each of the points listed in the joint statement. North Korea has either cheated on or disregarded the agreements in the past.

“This looks like a restatement of where we left negotiations more than 10 years ago and not a major step forward,” Anthony Ruggiero, senior fellow at Washington’s Foundation for Defense of Democracies think-tank, told Reuters.

Others think the agreement is in some ways a step back compared to past negotiations.

“Each of the four main points was in previous documents with NK, some in a stronger, more encompassing way,” Bruce Klingner,a former CIA deputy division chief for Korea, tweeted on Tuesday. “The [denuclearization] bullet is weaker than the Six Party Talks language.” 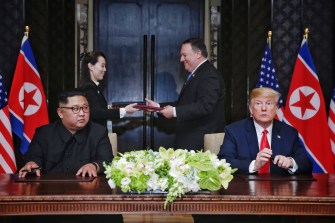 Trump told reporters he thinks this time is different because his is a new administration. That might be true. After all, his “rocket man” and “fire and fury” rhetoric ostensibly got Mr. Kim to the bargaining table. Trump framed that kind of talk as calculated strategy in a yet-to-be-released interview with Fox News’ Sean Hannity.

“So I think the rhetoric, I hated to do it, sometimes I felt foolish doing it, but we had no choice,” the president said.

Still, it’s too early for Trump to declare the summit a victory.

The agreement lacks details and a timetable on denuclearization. The president simply told reporters “we’ll be verifying” the denuclearization process with a “combination of both” Americans and international officials.

Senate Minority Leader Chuck Schumer said it was “very worrisome” that the statement was “so imprecise,” and that it gives Pyongyang “substantial leverage.”

What exactly did North Korea get out of the deal? Quite a bit, compared to the U.S.

“South Korea contributes [to the military exercises], but not 100 percent, which is a subject that we have to talk to them about,” the president said.

“At this moment, we need to figure out President Trump’s accurate meaning and intention,” his office said in a statement on Tuesday.

“Apparently jet-fuel is so expensive, it’s worth casting aside a 60-year ally and friend,” Robert Kelly, a professor at South Korea’s Pusan National University, said.

Trump even said he’d like to eventually close all U.S. military operations on the peninsula.

“We have 32,000 soldiers in South Korea. I would like to be able to bring them back home. That’s not part of the equation. At some point, I hope it would be,” he said.

On a point that’s harder to quantify, Trump also granted what Kim Jong-un, a dictator who executed more than 100 officials to secure power and has overseen the starvation of hundreds of thousands of citizens, has sought for a long time: a seat at the international table. Or, he for now at least has the semblance of it.

It seems total and lasting denuclearization of North Korea would be the only reward worth the U.S. concessions, though whether that will manifest remains to be seen.

Related
Starts With A Bang
The path forward for astronomers and native Hawaiians
A history of injustice and the greatest natural location for ground-based telescopes have long been at odds. Here’s how the healing begins.
Thinking
“Give a f***, actually”: The surprising benefits of being grateful for things you dislike
Radical Emotional Acceptance calls on you to celebrate all of life’s emotions — even the negative ones.
Thinking
Visual thinking: How to understand the inner lives of animals
Humans are good visual thinkers, too, but we tend to privilege verbal thinking.
Strange Maps
The world’s longest straight line connects Portugal to China
It’s nearly 20,000 miles long.
The Well
This is what the fourth dimension looks like
Left–Right, Back–Forth, Up–Down. What’s the fourth dimension?
▸
3 min
—
with
Brian Greene
Up Next
Politics & Current Affairs
Bizarre film trailer created by White House for Kim Jong-un is totally Trumpian
It’s not clear, though, whether the “trailer” is meant to influence Kim Jong-un or #45’s fans. rn