North Korea is a strange country. Known semi-derisively as “The Hermit Kingdom,” it famously isolates itself from foreign influence, maintains a command economy little changed since the fall of communism, and wants to engage in diplomacy between threats to nuke people. In many ways, it is a caricature of everything Americans think of communist regimes: poor, militarized, dreary, and obsessed with calling itself glorious and proclaiming that the final victory over the capitalists is scheduled for late next week.

Outsiders are generally baffled as to why the tiny country behaves the way it does. After all, why on earth would a nation try to figure out the atomic bomb before they master the art of growing enough food?

But there may be a method to the madness – the ideology of Juche. 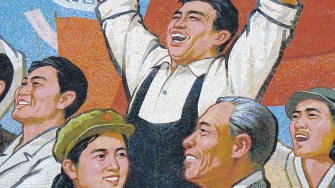 This mosaic in Pyongyang, the North Korean capital, depicts the triumphant homecoming of Kim Il-sung after he supposedly liberated Korea from Japan.

The official ideology of North Korea

Juche, which is pronounced joo-chay and most often translated into English as “self-reliance,” was first described in 1955 and continues to serve as the official ideology of the North Korean government. It is an eclectic blend of Marxism, Confucianism, Koran Nationalism, and Japanese Fascism. Taken together, they aim for an independent Korean state that can take its place among the great powers of the world without fear of foreign domination.

Three key points support the rest of the ideology. They are:

These were first mentioned in a speech given by Kim Il-Sung, the first leader of North Korea, in 1965 and have been further elaborated on since then. Many of its tenets fly in the face of other communist ideologies. Juche’s strong dedication to nationalism, rather than internationalism, is the most blatant example.

Other, wonkier distinctions include the North Korean rejection of the idea of “historical necessity,” the Marxist-Leninist notion that the march of history, driven by changes in economic conditions, will lead humanity to a communist utopia, and its replacement with the idea that humans are fully in charge of the march towards communism. It also mandates a “Great Leader” to help these people who are in charge of their destiny to reach utopia by doing all of the thinking for them.

This helps explain the God-like stature that the Kim dynasty enjoys in North Korea, along with the more religious elements of their rule.

Knowing that the intellectual cornerstone behind North Korea’s behavior is the goal of autonomy puts some of its actions in perspective. The rejection of economic liberalization, tight control on what outside information gets into the country, and standoffish attitude towards foreign powers in diplomacy is not only an excellent way to maintain dictatorial authority but also a way to keep North Korea “self-reliant.”

A detailed explanation of Juche as (allegedly) written by Kim Jong-il, the second leader of North Korea, can be found here.

“[Man] is the most developed material being, a special product of the evolution of the material world. Man was already outstanding as he emerged from the world of nature. He exists and develops by cognizing and changing the world to make it serve him, whereas all other material lives maintain their existence through their subordination and adaptation to the objective world.”

Why the Real North Korea Threat Isn’t Its Nuclear Weapons

Why do they even need an official ideology? Was Marxist-Leninism not good enough for them?

There are two reasons why North Korea saw the need to create a whole ideology for half a country.

The first was the need to remain neutral in the Sino-Soviet split. By devising its own form of communist rule, the North Koreans dodged the issue of needing to choose between Soviet Marxist-Leninism or Chinese Maoism and could continue to enjoy the good graces of both of its neighbors.

The other motivation was the need to legitimize Kim Il-sung, the founder of North Korea. By creating a Korean form of communism, Sung could claim to be on par with leaders such as Mao, Stalin, or Lenin by having his own ideology. This is partly why Juche includes concepts which are collectively referred to as Kimilsungism. 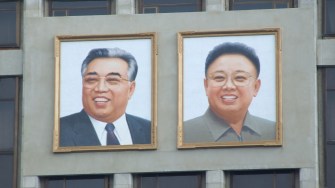 Is this sincere? Or is Juche just a complicated term for “Whatever the boss wants?”

“How the masses are awakened to consciousness and organized in a revolutionary way, and how they perform their revolutionary duties and historical mission, depend on whether or not they are given correct leadership by the party and the leader.”

Many observers argue that there is no real ideological system to Juche and that it is just a cover for whatever the Great Leader wants to do.

North Korea scholar Brian Reynolds Myers has argued this for years. He claims in his books that the concept of Juche is used primarily in dealing with foreigners and that its real use is in creating legitimacy for the Kim dynasty rather than providing an intellectual framework for what it’s doing.

He also proposes that North Korea isn’t a communist state at all, but rather a right-wing state that, ironically, derives its socio-political system from the Japanese fascism that once oppressed the Korean people.

In one of his books, Myers quotes from North Korean literature which speaks to the “five-thousand year old, jade-like spirit of the race, imbued with the proudly lonely life-breath of the worlds’ cleanest, most civilized people.” In another section, he compares the cults of the Kim family and the Japanese emperor during WWII, as both were “associated with white clothing, white horses, the snow-capped peak of the race’s sacred mountain, and other symbols of racial purity.”

His books caused Christopher Hitchens, who was once a Trotskyist and who had visited North Korea, to reconsider his view of the country. He concluded that his previous understanding of the country as Stalinist was mistaken.

That idea isn’t without detractors, however. John Ishiyama, a political scientist at the University of Texas, reminded Vox that “Every ideology is malleable,” and some Korean actions that seem to contradict Juche’s tenets can be viewed as new interpretations of an enduring ideology.

So, while Juche could be a real ideology created by a new offshoot of communists, it may be that Juche is nothing more than a malleable cover story for the Kim dynasty to maintain its power. While North Korea can be challenging to understand, there may be a method to its madness. While the odds of Juche being able to achieve its own goals seem rather low, it does provide a window for understanding the actions of the world’s least understood country.

Unless it’s a scam, in which case it is merely another thing to add to the confusing mess that is North Korea.

Tags
communismglobal issuesnorth koreapolitics
In this article
communismglobal issuesnorth koreapolitics
Related
Putin’s war: “The single biggest geopolitical mistake since 1989”
“This is much deeper than just ‘let’s figure out how we can get both sides to get along.’”
▸
15 min
—
with
Ian Bremmer
How resisting conformity can lead to real world progress
Thinking as a group and going along with the loudest voices can feel easy and even natural. But to make real positive change in our world, it’s important to hear all voices and question the perceived majority.
▸
5 min
—
with
Todd Rose
10% of people are dominating social media. What if the other 90% spoke up?
Social media isn’t the majority – it’s the vocal fringe.
▸
with
Todd Rose
The Big Think Interview
Why the world needs cults
Scientology, QAnon, and Heaven’s Gate: why do we seek healing from cults?
▸
with
Jamie Wheal
The Present
Not just COVID: mortality rates are up from homicides, drug overdoses, accidents
Some of these trends may be due, in part, to the lockdown.
Up Next
Smart Skills
Creativity isn’t just for the young, new research shows
It all depends on what type of creativity we’re discussing.