“We know that if there are 40 million people in modern slavery, only tens of thousands of victims are being helped, assisted and supported, whether through the criminal justices system or through victim support systems,” Fiona David, Walk Free Foundation’s executive director of global research, told CNN. “It’s a massive gap that we have to close.”

A map showing the estimated prevalence of modern slavery (per 1,000 people) according to the Global Slavery Index’s 2018 findings. The 10 countries with the highest prevalence are noted.

At End Slavery Now, Cazzie Reyes details how such a future might play out. Currently, China’s factories are losing their traditional source of cheap labor as worker wages and education levels rise. To address this labor gap, the country purchased 56,000 robots in 2014 and plans to rapidly increase factory automation.

As this shift continues, low-skilled workers may “be moved from completing routine to more value-added tasks” or even new jobs in robot manufacturing.

In Love and Sex with Robots, A.I. researcher David Levy argues that such institutions can reduce prostitution rates. As the dolls become more lifelike, he sees the world’s oldest profession going the way of match girls and lamp lighters.

Futurists Ian Yeoman and Michelle Mars divine a similar future in their paper “Robots, men, and sex tourism.” By 2050, they write, Amsterdam’s famed red-light district will be dominated by hyper-realistic sex androids. The androids would not only allow the sex industry to grow but also curb the spread of STIs and improve the government’s ability to regulate human trafficking. 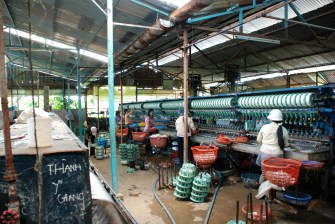 “Displaced workers without the skills to adapt or the cushion of social security will have to compete for a diminishing supply of low-paid, low-skilled work in what will likely be an increasingly exploitative environment,” Alexandra Channer, Verisk Maplecroft’s human rights strategy lead, said in a release. “Without concrete measures from governments to adapt and educate future generations to function alongside machines, it could be a race to the bottom for many workers.”

“So we’re not just having a conversation here about objects that people rub on their genitals. This is not what this is about,” Kathleen Richardson, director of the Campaign Against Sex Robots, told Feminist Current. “[Sex robots are] piggybacking off on those real lived experiences of real human women being dehumanized by the commercial sex trade.”

The 13th Amendment: The unjust prison to profit pipeline

While automation may, one day, reduce demand for North Korea’s macabre exports, it is unlikely the totalitarian regime would do away with this system in the name of economic efficiency.

That’s because this form of slavery is as much political as it is profitable. It removes dissidents from political life and places them in a type of social purgatory. Citizens who are tired, hungry, weak, and enslaved in a strange land make for poor revolutionaries.

Truth is, we don’t know. As Pauline Oosterhoff, research fellow at the Institute of Development Studies, writes: “The fact is that we do not have a sure-fire way to eradicate slavery in the existing economy. We are not really sure what role previous rounds of automation have played in either eliminating or encouraging modern-day slavery, and we do not know what effects new developments in automation and artificial intelligence will have.”

Automation may make reducing chattel slavery easier in some states, but it can’t inoculate societies from the social and political ills that create opportunities for exploitation. According to the Council on Foreign Relations, contemporary abolitionists focus their efforts on these strategies:

Transparent supply chains. Modern businesses have complex international supply chains that may intersect with slavery — some even argue it’s impossible to make a smartphone that doesn’t rely on child labor. In addition to transparency laws, abolitionist call for mandating supply chain investigations and making ethical sourcing a central business practice.

Tags
crimeglobal developmentglobal issueshumanitylawmanufacturingpovertysexual violenceslaverysocial change
In this article
crimeglobal developmentglobal issueshumanitylawmanufacturingpovertysexual violenceslaverysocial change
Related
Should you bring a kid into this world?
Climate change. War. Civil unrest. Is it responsible to have kids today?
▸
4 min
—
with
Ari Wallach
High Culture
From Poe to Mao: piecing together the evolution of detective stories
Detective fiction reveals how a particular society or time period looks at crime and criminal justice.
The Present
To the moon? Five microeconomic lessons from Bitcoin
Bitcoin is often derided as volatile, but a new report suggests there is a method to the madness.
The Present
Could we replace lawyers with robots? In some cases, yes
You don’t need to completely automate a job to fundamentally change it.
Neuropsych
Psychopaths don’t move their heads when talking
A new study found that people who scored high in certain psychopathic traits are more likely to limit head movements.
Up Next
The Present
California to ban ICE detention centers, private prisons
“People are not commodities!” said Assemblyman Rob Bonta.