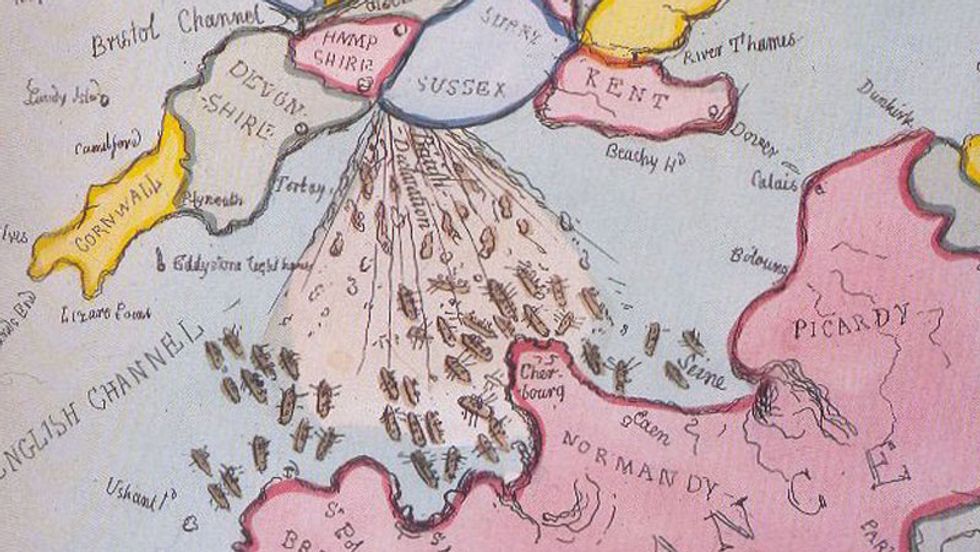 “I fart in your general direction,” a haughty Frenchman (of course played by John Cleese) shouts at a not so merry band of Englishmen looking for the Holy Grail in the Monty Python movie of that name. That insult could have been inspired by this hand-coloured etching, although the ‘leavings’ are aimed in the opposite direction.

This caricature, dating from 1793, is called ‘A New Map of England and France. The French Invasion; – or – John Bull Bombarding the Bum-Boats’. It deals with the then very acute British fear of a French invasion. At the time, France's revolution was in a highly combustible state, perhaps comparable to Soviet Russia or Islamic Iran at the height of their respective revolutions. Not without cause, revolutionary France feared its neighbours would attempt to restore the old order. Not without cause, France's neighbours feared it would attempt to export its revolution.

One could call this caricature a fine example of scatological cartography, since George III

“craps vigourously on the coast of France, dispersing a number of tiny gunboats (…) The image is gross, but the King’s evacuations are heroic, patriotic and contemptuous, expressing the feelings of the brutish but uncensored John Bull, whom he here embodies.”

George III indeed literally embodies England, with Northumberland as his nightcap, Kent and Cornwall as his feet and the ‘bum-boats’ fanning out from his bottom-cheeks, situated somewhere between the busy ports of Bournemouth and Portsmouth.

“The ‘British Declaration’ (also) emitting from John Bull’s backside refers to a royal promise that the port of Toulon, then occupied by the British, would be ceded to France on the restitution of its monarchy.”

Both preceding quotes were taken from a catalog accompanying an exhibit at London’s Tate Museum in 2000, entitled: ‘James Gillray: The Art of Caricature.’ This James Gillray (1757-1815) etched bitingly satirical caricatures of contemporary political and social issues. Most of his baroque-ish, Rubenesque work was published between 1792 and 1810. He is considered a major influence on caricaturists to this day.

Gillray started out as a letter-engraver and spent some time wandering in the company of ‘strolling players’ before being admitted to the Royal Academy. From then on, he supported himself by producing caricatures – often against George III who, fortunately perhaps for Gillray, once proclaimed upon seeing some: “I don’t understand these caricatures.” The grand total of Gillray’s caricatures stands somewhere between 1,000 and 1,700.

As with many British observers of the French Revolution, Gillray’s initial sympathies reversed in response to its excesses, and turned anti-revolutionary and conservative. This map falls into the category of his Anti-Jacobin caricatures, glorifying John Bull – although that British archetype is equated here with George III, otherwise much berated by Gillray. Although he mostly toed the Tory party line, his instincts as a free-lancer ensured that his wit lashed out at an oecumenical selection of political targets.

The end of Gillray’s career was brought on by failing eyesight, which encouraged desperation, drink and eventually madness. He died in 1815 – just 17 days before Napoleon’s defeat at Waterloo – and is buried in St James’s Church in Piccadilly.

This map was sent in by Gary Ostroff, a self-avowed Gillray fan, who recommends Vic Gatrell’s ‘City of Laughter: Sex and Satire in Eighteenth-Century London’ as a good book to grasp the content and context of Gillray’s prints, and this page at the New York Public Library, a thorough treatment of Gillray’s life and works.