Borneo is shared by three states: the southern chunk is Indonesian, most of the northern part is Malaysian except for the enclaved sovereign sultanate of Brunei Darussalam (itself consisting of two non-contiguous parts). The Indonesians refer to their part of the island as Kalimantan, in Malaysia the Bornean states of Sabah and Sarawak are simply referred to as East Malaysia.

The two main British Isles are a bit further down the list of largest islands. Great Britain (218.595 sq. km, 84.400 sq. mi.) still is the eighth-largest, after the Japanese main island of Honshu and before the Canadian arctic island of Victoria. Ireland (81.638 sq. km, 31.521 sq. mi.), i.e. the Republic plus British-governed Northern Ireland is the world’s 20th-largest island, after the southern Philippine island of Mindanao and before the northern Japanese island of Hokkaido. Together, they measure about 300.000 sq. km (116.000 sq. mi.), or less than half of Borneo.

For the benefit of his primarily British readers, 19th-century naturalist and explorer Alfred Russel Wallace included this map in his 1869 book The Malay Archipelago, comparing the size of the British Isles with that of Borneo to give them an idea of the vastness of the place. The British Isles are shown in their normal projection (north up) while Borneo is tilted (east up) to provide better shelter for the British Isles. 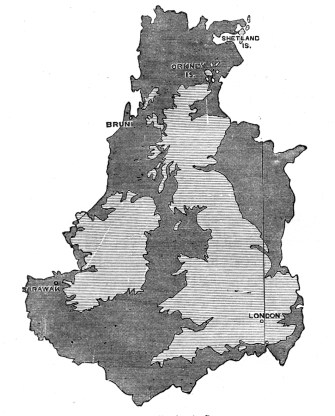 Welsh-born Alfred Russel Wallace (1823-1913; yes, Russel with one -l) dedicated his book to “Charles Darwin, author of The Origin of Species (…) not only as a token of personal esteem and friendship, but also to express my deep admiration for his genius and works.”

Yet Wallace was quite an important figure himself in the field of evolutionary biology, as in anthropology and geographical exploration. While exploring the Malay archipelago, he discovered the Wallace line, dividing the Australian fauna from that of Asia. Also named after him are Wallace’s flying frog and the ‘Wallace effect’, the hypothesis that natural selection can contribute to the reproductive isolation of incipient species by encouraging varieties to develop barriers to hybridisation. Wallace proposed a theory of natural selection independent of Darwin, prompting the latter to publish his theory sooner than intended.

Although not the acknowledged progenitor of the evolution theory, Wallace is considered the father of biogeography, the study of the geographical distribution of animal species. In fact in biogeography, ‘Wallacea’ describes a group of Indonesian islands separated by deep water from Asia as well as Australia (i.e. Lombok, Komodo, Flores, Sumba, Timor, Sulawesi and the North Moluccan islands).

The Malay Archipelago was one of the most popular journals of scientific exploration of its time, kept continuously in print from its publication in 1869 into the second decade of the 20th century. Joseph Conrad (of Heart of Darkness fame) called it his “favourite bedside companion”. Despite his scientific importance, Wallace’s relations with other evolutionists were somewhat strained by his belief in spiritualism. He is sometimes labelled one of the ‘forgotten evolutionists’. Darwin successfully campaigned for Wallace to receive a state pension of £200 per annum so that he could overcome the endemic poverty he suffered from towards the end of his life.

This map, placing Sarawak just off Ireland’s westernmost Dingle Peninsula, London on the Prime Meridian, slicing off Borneo’s south and the Shetlands touching Borneo’s eastern side, can be found here on papuaweb, a website dedicated to issues relevant to the Indonesian provinces of Papua and Papua Barat (formerly collectively known as Irian Jaya) for students, researchers, development workers, community leaders, government agencies and others.