Squaring the circle is a proverbial way of describing something impossible. Jacques-Guillaume Thouret set himself an even more daunting task: squaring the hexagône – in French, that word is shorthand for describing the roughly six-sided shape of France.

I’m not sure people used this clever eptithet back in Thouret’s 18th century. Thouret (1746-1794) was born into a bourgeois family in the French département of Calvados. Back then, in the Ancien Régime, there was no such territorial unit. The area was still part of the old province of Normandy. It was Thouret himself who instigated the change from provinces to the new system, still en vogue today.

Thouret was an exemplary revolutionary: anti-clerical, anti-royalist, anti-traditionalist, democrat, legalist, positivist. He was elected as a député for the Third Estate for Rouen to the Estates-General of 1789. This was in the year that the civil agitation in France erupted into the French Revolution. Thouret was elected president of the Estates-General three times in the following years.

The député for Rouen is credited for being one of the driving forces behind the ousting of the French monarchy. He also contributed greatly to revolutionary France’s new judicial system. Thouret drafted the 5th article of the Declaration of Human and Citizen’s Rights (stating that nobody can be put on trial without being able to rely on legal counsel). His bust is on display in the Cour de cassation, France’s highest law court, of which he was president in 1793.

In 1790, Thouret proposed dissolving the age-old provinces of France, replacing them with the now well-known administrative division into départements. The French Wikipedia entry on Thouret mentions that this was implemented non sans que quelques retouches aitent été apportées à son projet (“not without some modifications having been applied to his project”). 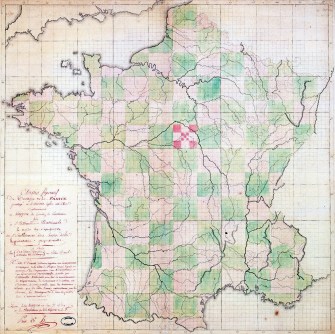 This is understating the case just a bit, as this map proves. In order to radically break with tradition, Thouret originally proposed dividing France into 80-odd perfectly rectangular départements, ignoring rivers, mountains, agglomerations of habitation (or lack thereof) and other aspects of the lay of the land. Furthermore, since France’s outer boundaries aren’t rectangular, this led to some very small slivers of territory for the départements near the border.

The French Revolution also entailed a revolution of measurements. The revolutionaries were obsessed with standardising, and replaced traditional, often regionally variable measurements with a universal metric system. Sometimes the changes proved to be a bridge too far: the revolutionary calendar was abolished after only a few years; and Thouret’s square départements – reminiscent of the rectangular methods of the Land Ordinance Survey in the US (see post #120) and of the proposals of Leopold Kohr (see post #18) – never made it off the drawing board.

Chances could turn quickly during the French Revolution (which was less a singular event than a years-long process). In 1794, during the Reign of Terror, Thouret was arrested, condemned and executed by the guillotine. It’s unclear whether he had the legal counsel he had provided for…

This map was kindly provided to me by Valéry Didelon.

Some astrobiologists believe life is rare, while others believe it is common in the Universe. How can we find out which view is correct?
Up Next
Strange Maps

A Map of the Truelove River

Stuck in Despair Marsh, or marching up the Determination Hills?