This early 20th century postcard, Shewing the Course of the Truelove River, charts that stream from its two headlands in the (Angelina River) and at Indifference Hill (Edwin River). Those two flows unite at the Falls of Dislike, follow a united course as the Truelove River through the Valley of Disdain – between the Mountains of Melancholy and Determination Hills.

Then Opposition Bend, Angrysire, Separation Deep and Misery Marsh complete the encirclement of Sentimental Meadow. When the river flows out of Misery Marsh via Correspondence Outlet, it manages to slide by Richrival Bend, Sickbed and Sinking. 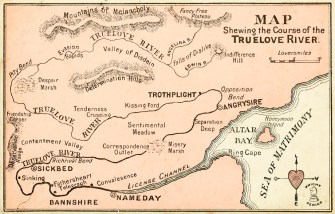 The localities of Fathersheart, Telegraph and Convalescence (all across the river from Bannshire), the Truelove River opens up into License Channel at Nameday. After Ring Cape, Altar Bay and Honeymoon Island, the Truelove River has morphed into the limitless Sea of Matrimony.

This map is reminiscent of other emotional cartography in a previous post, namely the A German Map of the Empire of Love (#59). However, whereas that map portrays love as any one of several different, static areas, the Truelove River presents love as a process in constant change, leading to a certain goal.

Found this map here at the excellent Radical Cartography.

Pinsonia, An Imaginary Province of Brazil