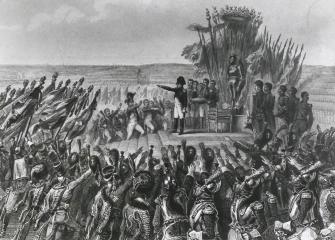 The Great Game remains the same: how to gobble up most of the world, or at least more of it than your opponent can swallow. It’s just the players that change. In our times, the two top dogs are the United States and China. During the Cold War, it was the U.S. versus the Soviet Union. And in 1805, the year this cartoon was published, the main contenders were the British and the French.

Across the top, the title reads: The Plumb-pudding in danger: – or – State Epicures taking un Petit Souper. The pudding is of course the earth itself, steaming on a plate between the two ‘state epicures’. Seated opposite each other and armed with an oversized knife and fork each, they are carving into the pudding, eager to indulge their insatiable geopolitical appetite.

On the left, we have William Pitt the Younger, Prime Minister of the United Kingdom. On the right: Napoleon Bonaparte. No longer content to be called First Consul of France, Napoleon had only recently crowned himself Emperor. Both are wearing their ‘work clothes’, i.e. military uniforms. Pitt is dressed in the red coat typical for the British army of the time. Napoleon is wearing the blue coat of the Imperial French Army.

And it’s not just by these primary colours that the artist underlines their opposition. Pitt’s hat is a tricorn, Napoleon’s a bicorn (festooned with a cockerel-like plume in the French tricolor). And, perhaps most obviously, Pitt is tall and spindly, his French counterpart–true to the caricature already current at the time–short and stocky.

What they’re doing to that poor pudding between them is also rich in symbolism. Clearly visible at the center of the globe are the British Isles – obviously, the most important part of the globe, at least to the cartoon’s British audience. 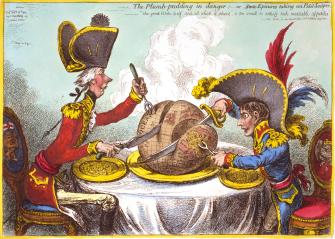 William Pitt the Younger and Napoleon, dividing up the world amongst themselves.Credit: Public domain, via the British Library

Both Pitt and Napoleon are using a carving knife and fork to cut slices off the pudding. Pitt’s fork is a trident, reminiscent of British sea power; Napoleon’s knife resembles a sword, perhaps referring to French supremacy on land. Pitt is slicing off a big chunk of the ocean, while Napoleon is helping himself to continental Europe.

Napoleon’s fork is sticking into a part of Europe labeled ‘Hanover’ – no doubt a reminder to the British audience that the French now occupied the ancestral home of the Hanoverian dynasty sitting on the British throne. Perhaps also to please his audience, the cartoonist shows Napoleon’s piece as significantly smaller than Pitt’s.

Pitt and Napoleon each have a golden plate in front of them to put their slice of the world on. Pitt’s is emblazoned with the British Royal Coat of Arms, Napoleon’s with the Imperial Crown. Pitt’s chair shows a lion carrying the Cross of St George, the emblem of England. Napoleon’s chair has an imperial eagle holding on to a Phrygian cap, the bonnet that came to symbolize the French revolution.

So, what’s going on? The publication date, February 1805, marks a curious lull in the Napoleonic Wars (1803-15). A few months earlier, Napoleon had amassed a potential force for invading Britain in Boulogne-sur-Mer. But now he was making overtures for reconciliation with his enemy across the English Channel. 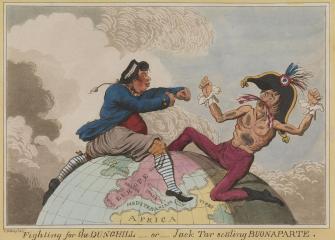 ‘Jack Tar’ – the nickname for a British sailor – slugging it out with ‘Buonaparte’, back in 1798.Credit: Public domain, via the National Museums Greenwich.

As the cartoon suggested, peace with Britain would entail both parties establishing a sphere of influence: for Britain, the seas and its colonies (the map shows the West Indies but not Britain’s recently lost North American possessions); for France, the European mainland.

As it turned out, both the invasion and the reconciliation fell through. Later that same year, Nelson would defeat a Franco-Spanish fleet at Trafalgar, establishing Britain’s maritime dominance without having had to resort to political compromise with France.

For a while at least, Napoleon would continue his victorious streak on the mainland – meaning the cartoon was a prediction that came true. But in the end, Napoleon would be defeated – not once, but twice; at Waterloo in 1815 for the final time (see also #1050).

Sold in hand-colored prints, this is likely the most famous work by James Gillray (1756-1815), one of two contenders for the title of Britain’s most influential caricaturist – the other being William Hogarth. Martin Rowson, cartoonist for the Guardian, calls it “probably the most famous political cartoon of all time.”

Interestingly, it’s a thematic elaboration of one of Gillray’s earlier cartoons. In 1789, he depicted ‘Jack Tar’ and Napoleon sitting astride the globe, with the British sailor punching the Frenchman a bloody nose. At that time, Napoleon must have been an unknown in Britain, because he is depicted as a scrawny, full-figured person, not the “little corporal” of later times.

Perhaps this cartoon is less popular than the later one because the world is explained not as a delicious ‘plumb-pudding’ but as a less appetising ‘dunghill’.

Reading between the lines of Dorothy’s adventure to the Emerald City.
Up Next
Diversity & Inclusion

Sexual harassment damages organizations (in more ways than you think)

At first blush, the damages done by sexual harassment seem obvious. Make that incredibly obvious. Such behavior exposes our organizations to legal consequences and the subsequent financial fallout. And in […]