Why Pickle Brine On Icy Roads Could Be Smarter Than Salt

Rock salt is great at keeping roads free of ice, but using it over the long term poses serious dangers. 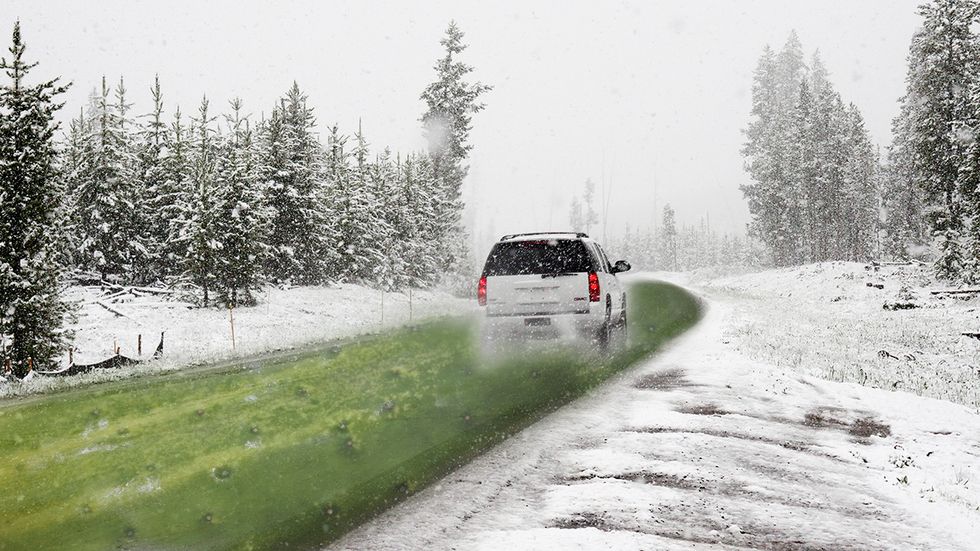 Rock salt is one of the most effective substances for deicing roads when winter weather strikes. But while it makes roads safer, tons of salt end up in lakes, rivers and marshes where it poses dangers to aquatic life and the potability of water sources. In some cases, it’s been building up, layer by layer, since the 1930s. Currently, the U.S. dumps about 15 million tons each year.

It doesn't take much salt to fundamentally change a body of water. According to a 2017 study, just 1 percent of land within 500 meters of a lake needs to be paved for there to be an increased risk of the lake becoming saltier over time. That's alarming once you consider that about a quarter of U.S. lakes are surrounded by at least 1 percent of developed land.

The 2014 U.S. Geological Survey found that 84 percent of northern U.S. streams have toxic levels of chloride (road salt is sodium chloride), which peaks in the winter when salt is liberally spread for road safety.

“Like most chemicals, too much salt is toxic,” write William Schlesinger and Stuart Findlay of the nonprofit Cary Institute of Ecosystem Studies. “And humans are inadvertently increasing the salinity of freshwater resources through routine road-salt application. If salt continues to accumulate at its present rate, in our region many surface and well waters will be unhealthy for humans and wildlife by the end of this century.”

Still, rock salt is a cheap and effective way to lower the freezing point of snow and ice. It works something like this:

However, the environmental dangers of salt have led some to propose and experiment with alternative deicing solutions, most of which work by the same process described above.

The leftover water from beet processing contains sugars that lower the melting temperature of ice, and using the solution as a deicer would greatly reduce the amount of salt that ends up in waterways. But there are downsides. The most obvious is the smell, which residents of communities that experimented with beet wastewater said smelled like soy sauce or stale coffee.

Beet wastewater is less corrosive to cars, guard rails and pavement than rock salt. Still, some fear that the sugar it contains could encourage the growth of bacteria in water sources.

In Polk County, Wisconsin, trucks apply cheese brine to roads when snow is in the forecast. Cheese brine, mixed with additives, is remarkably effective at preventing snow from freezing to roads.

"The dairy gives us that for free, and we will go through 30,000 to 65,000 gallons a year," said Moe Norby, technical support director for Polk County's highway department, to Wired.

Of course, cheese brine is particularly cost-effective for Polk County because it's one of the county's main exports.

"Really when you start getting into how you treat road surfaces, the major cost is transportation. Getting whatever you are going to use to you," said Bret Hodne, public works director for West Des Moines, Iowa.

Perhaps the strangest alternative to rock salt is pickle brine, which Bergen County in New Jersey used in large amounts during the winter of 2014. Brine is as effective as rock salt, and can melt ice at temperatures as low as -6°F  or -21°C. It might not smell great, but it's cheaper and deposits less chloride into the environment than rock salt, and there's plenty of it being discarded in homes and factories.

New Jersey was pushed to use pickle brine in 2014 because its 40,000-ton shipment of rock salt was held up at a port in Maine, where it was denied further transport because the vessel wasn't flying a U.S. flag—this is a violation of the 1920 federal Maritime Act (also known as The Jones Act), which mandates that ships carrying goods between two U.S. ports must fly the American flag. This bureaucratic tangle forced New Jersey to get creative with spare brine that turned out to be waste and cost effective.

Similarly, Alaska has applied leftover barley residue from vodka distilleries to melt ice on its roads. Russia, Hungary, and Tennessee have used waste from their distilleries to deice roads. It seems many regions may have alternative chemicals on hand that can be inventively used to cut costs, eliminate waste, and protect wildlife and water and humans from the harm that is accumulating.