Is Trump an ‘unindicted co-conspirator’? Here’s what the term means

Some Democrats and political analysts are calling Trump an ‘unindicted co-conspirator’ after his former lawyer, Michael Cohen, pleaded guilty to eight felonies. 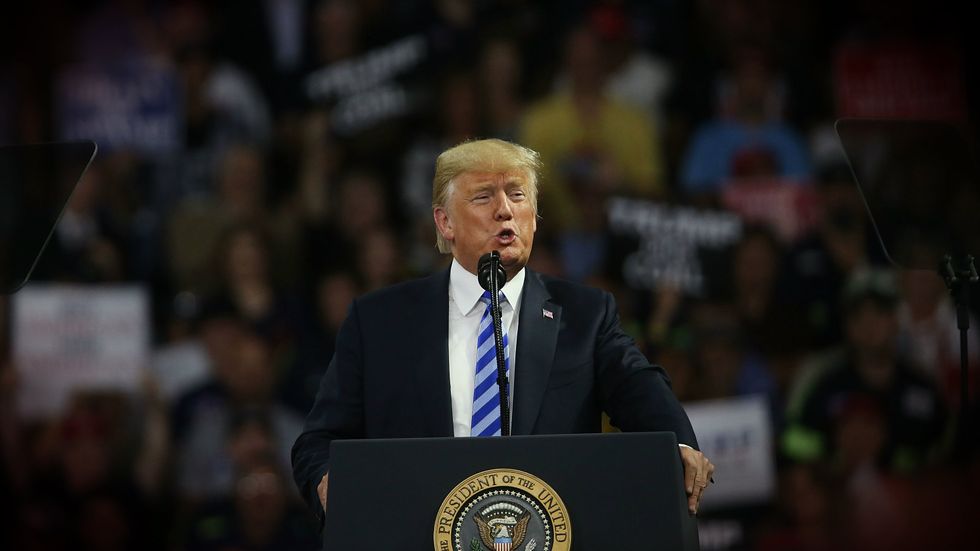 Michael Cohen, a former lawyer for President Donald Trump, pleaded guilty to eight felony counts on Tuesday and told the court that he worked “in coordination with” Trump to make criminal hush-money payments to Stormy Daniels and Karen McDougal during the 2016 presidential campaign. Cohen also suggested that he made one of these payments “at the direction of” the president.

Now, some are calling Trump an ‘unindicted co-conspirator’ in the federal crimes. The term is defined as a person who is alleged in an indictment to have engaged in a criminal conspiracy, but who was not charged in the same indictment. Although Cohen didn’t explicitly mention Trump in his admission, he said that he committed the crimes with “a candidate for federal office,” which is almost certainly a reference to the president.

“Trump is clearly guilty of violating campaign finance laws and also guilty of federal conspiracy as well (because he agreed with Cohen, and possibly others, on a plan to violate federal law),” Jens David Ohlin, a law professor at Cornell University, told Vox. “Normally he would be indicted right away. But that won’t happen only because he’s the president. But I suspect he’ll be named as an unindicted co-conspirator and also there’ll be a separate section of the Mueller report titled “Conspiracy to Violate Campaign Finance Laws” or something like that.”

The term ‘unindicted co-conspirator’ became widely known in 1974 after a grand jury applied it to former President Richard Nixon in the wake of the Watergate scandal. Since then, as a general rule, federal prosecutors choose not to name unindicted co-conspirators unless there’s “significant justification” to do so. The U.S. Attorney’s Office Manual states:

“In the absence of some significant justification, federal prosecutors generally should not identify unindicted coconspirators in conspiracy indictments. The practice of naming individuals as unindicted coconspirators in an indictment charging a criminal conspiracy has been severely criticized in United States v. Briggs, 514 F.2d 794 (5th Cir. 1975).”

In Briggs, the Fifth Circuit Court of Appeals found that a federal grand jury had violated the due process rights of several activists when it named them as unindicted co-conspirators in a plot to disrupt the 1972 Republican National Convention.

The court wrote that the alleged co-conspirators hadn’t been given an opportunity to defend themselves, and suggested that the government should have indicted the co-conspirators if it had probable cause.

“The courts have struck down with strong language efforts by grand juries to accuse persons of crime while affording them no forum in which to vindicate themselves,” the court noted.

However, the Fifth Circuit Court of Appeals also wrote in a later case that “in addressing the merits in Briggs, this Court … made absolutely clear that … that no legitimate function was served by naming and accusing an individual of a crime without indicting that individual as a defendant.”

The suggestion here is that prosecutors may choose to name unindicted co-conspirators when doing so serves a strong public interest.

However, there’s little doubt that the unindicted co-conspirator in the Cohen indictment was Trump. Still, whether any formal charges will ever be brought against the president remains an open question.

“The only time a claim like ‘unindicted co-conspirator’ becomes formalized is when there is a criminal prosecution against other people charged with conspiracy, and the government has to list in a bill of particulars who the co-conspirators are,” Nick Akerman, a former Watergate prosecutor now in private practice, told NPR. “But clearly, based on the facts in this information that Michael Cohen pled to … there can be little doubt that Donald Trump is an unindicted co-conspirator in those two crimes.”