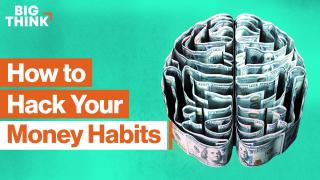 PAUL ZAK: Games can be a very effective way towards financial independence. They keep us attentive to the task.

NARRATOR: Gaming has become the largest form of entertainment in the world. It dwarfs all other forms of media, from streaming to social media and the box office. But what is it about gaming that has us so transfixed?

ZAK: Games by design are meant to reinforce behavior and keep you coming back.The brain loves novelty. So when I have something new in my environment, I get a little reward response in my brain that says focus on this thing.

NARRATOR: Games are using techniques that activate dopamine and oxytocin in our brains, and that puts our minds in hyper-focused immersive states.

ZAK: Games reduce the stress of making decisions, and so app designers have now used game structures to help people learn new information, make new decisions. And one of the most interesting applications is in financial decision-making.

NARRATOR: So if games have such a strong influence over our brains, how can we leverage games to make better financial decisions? And if we do, what's the worst that could happen? This is Your Brain on Money.

Meet Paul Zak. He's a neuroscientist and a professor at Claremont Graduate University in Southern California. And he's looked deep into our brains on games.

ZAK: I'm a Martian. I don't really understand the humans. And so I spent 25 years running experiments to try to understand why people do what they do. We all want instant gratification, but to get good stuff later, we have to save money, and that's a painful stimulus for the brain. So it's actually processed like pain when I have to give something up, like give up money. And so overcoming that requires metabolic energy, but the brain's a very lazy organ. It takes so much energy to run your brain that it wants to idle most of the time.

NARRATOR: The brain compensates for its laziness by forming pathways that allow us to achieve tasks on autopilot. And these are called habits.

ZAK: The deep question I show do we change habits? Two core things have to happen in the brain to influence your decision-making. The first is you have to attend to that information. That's driven by the brain's production of dopamine. The second thing you've gotta get my lazy brain to care about the outcomes, and that caring is driven by emotional resonance, and that's associated with the brain's production of oxytocin.

NARRATOR: Paul calls the combination of these two events neurologic immersion, and it's essential in helping develop new and better habits. One area people often experience this brain state is while playing games.

ZAK: Some of the gamification apps focus so much on fun, as opposed to a learning experience that they just are like any other game You might as well play Candy Crush. Financial decisions are hard. So by breaking down tasks in a platform that makes it fun to make difficult decisions, people are able to better understand what they're doing, but also able to change what their default behavior is. And we get in the habit of, for example, savings.

NARRATOR: We met with the developers of a gamified savings app to see what techniques they use to change behavior.

This is Lindsay Holden, and she's the co-founder and CEO of Long Game.

LINDSAY HOLDEN: A lot of people have trouble engaging with their finances. So how do we get you to start changing your behavior?

NARRATOR: Lindsay and her team are using incentives called prize-linked savings accounts to increase their users' savings habits. Inside the app, users open an FDIC-insured savings account. Every time they save money, they're rewarded with access to mini-games that have cash prizes, which help grow their savings even further. And those little rewards encourage users to save more.The prize money is won on top of interest so users' money is never at risk.

ZAK: They move the fun part of spending money, like buying lottery tickets, into a savings component.

NARRATOR: To illustrate how this affects the brain, Paul conducted an experiment with a woman named Julia.

ZAK: There's a need to measure brain activity during gamification tasks, so that we understand how to optimally design these games so that people learn effectively what they're doing and don't just waste time picking up coins.

These immersion peaks tell us that this game is capturing her emotionally, right? It's really creating a great experience for her.

NARRATOR: But not all gamification leads to better habits.

ZAK: Apps that focus on financial decision-making in which there's a high return to taking risk can also establish negative pathways in the brain where you're training the brain to take more and more risk. And so you want to be careful that the games you're playing are not driving you towards behaviors that may not be adaptive outside the game world.

NARRATOR: Our brains are wired or easy, short-term decision-making that gives instant gratification, and a lot of finance decisions require patience, discipline, and ultimately a lot of help.

ZAK: One of those most interesting things we found is that people want help when it comes to making difficult decisions. And so there's a large portion of the US and world population that are either unbanked or underbanked, and part of that is just lack of knowledge.

In my view, any app that helps you be a more effective saver is probably a good app, but I think we have to do a lot more work to really understand the underlying neuroscience of gamification. And so we need to continue to design games that teach you more about how to "level up in life," not just level up in the game.