A new study published by a UCL researcher has demonstrated how different types of screen time can positively (or negatively) influence young people’s mental health. The study suggests that boys who play video games frequently in early adolescence (around age 11) are less likely to develop depressive symptoms throughout the following years. Additional findings in this study suggest that girls who spend more time on social media appear to develop more depressive symptoms. 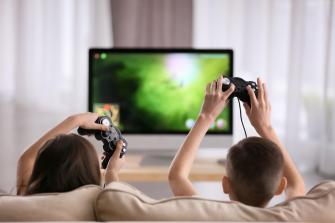 The study gained interesting insight into the link between depression rates at age 14 and video game usage a few years earlier. Credit: Pixel-Shot on Adobe Stock

The study’s lead author, Ph.D. student Aaron Kandola, explains to Eurekalert: “Screens allow us to engage in a wide range of activities. Guidelines and recommendations about screen time should be based on our understanding of how these different activities might influence mental health and whether that influence is meaningful.”

How this study was conducted:

When comparing young boys (age 11) who played video games to those who don’t, the study showed interesting results:

When comparing how depression impacted young girls based on their social media usage, the researchers found that:

Previous studies have concluded there are some mental health benefits to playing video games.Credit: TheVisualsYouNeed on Adobe Stock

There has been a lot of speculation in the past two decades about screen-time, social media, and video games. Whether it’s linking video games to violence and obesity or linking social media to depression and anxiety — this seems to be a controversial question. According to the research, the answer to this question is yes, video games can be beneficial in moderation when paired with physical activity and real-life application.

Adding in some physical activity could be the difference between beneficial and harmful.

The above-mentioned study also noted that more frequent video game use was consistently associated with fewer depressive symptoms in boys with lower physical activity, but not in those with high physical activity levels.

Previous studies have concluded there are some mental health benefits to playing video games.

A 2020 study by the University of Oxford analyzed the impacts of playing two extremely popular games at the time: Nintendo’s “Animal Crossing: New Horizons” and Electronic Arts’ “Plants vs. Zombies: Battle for Neighborville.” The study used data and survey responses from over 3000 players in total — the games’ developers shared anonymous data about people’s playing habits, and the researchers surveyed those gamers separately about their well-being.

Results of this study found that time spent playing these games was associated with players reporting that they felt happier.

Additionally, previous studies (such as this University of Arizona study) have linked video game usage with new learning opportunities: “

Games like Minecraft are being used in more and more classrooms around the country. MinecraftEdu (recently purchased by Microsoft), allows teachers to structure a sandbox-style play environment around any curriculum. Students can work together to learn the scientific method, build farms, or take advantage of turtle robots to learn basic programming. Not only do these activities improve team-building skills, but they give students the chance to develop and practice technological literacy.”

“Everything in moderation” is an important factor in determining whether video game use is beneficial or harmful.

While there can be some positive impacts from playing video games, research (such as this study conducted in 2013) has also shown that people who spend a predominant part of their day gaming are at risk of showing lower educational and career attainment in addition to problems with peers and lower social skills.

Tags
braindepressiongaminglearningmental healthmindfulnesspsychologySocial mediaTech TrendsThe Presentyouth
In this article
braindepressiongaminglearningmental healthmindfulnesspsychologySocial mediaTech TrendsThe Presentyouth
Related
Neuropsych
Psychology studies that go viral are likelier to be bogus
A new 20-year analysis of over 14,000 psychology studies finds that a study’s media coverage is negatively linked to its replicability.
The Learning Curve
Why do high IQ people stagnate in their careers? Emotional intelligence
Research suggests that emotional intelligence is more vital for success than IQ.
The Present
Even in the age of AI, some problems are just too difficult for computers
Computers are growing more powerful and more capable, but everything has limits
The Future
How the metaverse will revolutionize K-12 and higher education
Imagine going on a tour through the human circulatory system as a tiny cell. That is just one example of education in the metaverse.
How to live after your soulmate has died
Astronomer Michelle Thaller explains the healing power of physics after losing her husband.
▸
7 min
—
with
Michelle Thaller
Up Next
Health
They don’t come as pills, but try these 6 underprescribed lifestyle medicines for a better, longer life
The majority of Americans are stressed, sleep-deprived and overweight and suffer from largely preventable lifestyle diseases such as heart disease, cancer, stroke and diabetes. Being overweight or obese contributes to […]