How Benjamin Franklin's daily schedule can make you more productive

How do great people get so much done? If you're Ben Franklin, you lay out a detailed schedule. 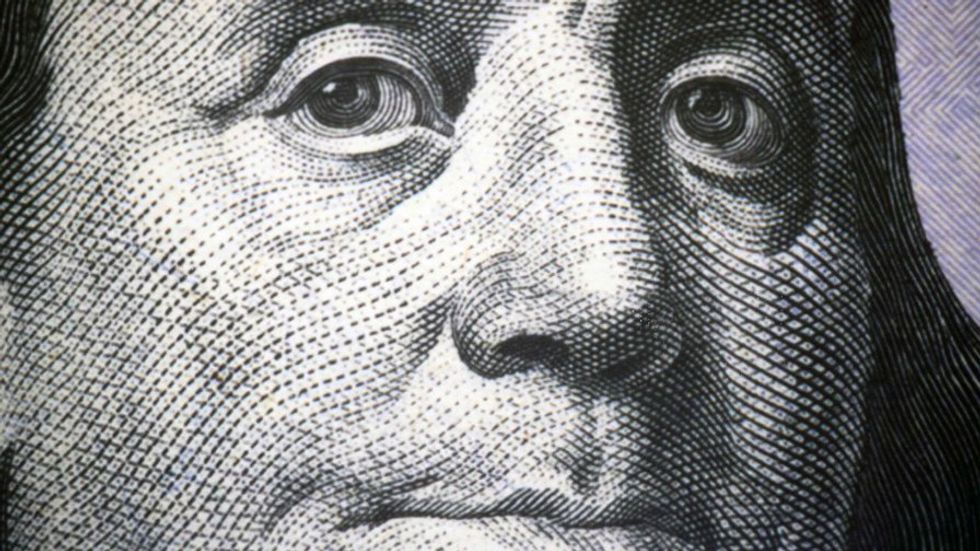 A close up of Benjamin Franklin as he is featured on the one hundred dollar bill (Shutterstock).

Ben Franklin was an industrious man. In his 84 years, he found time to be a scientist, publisher, author, revolutionary, freemason, postmaster, governor, ambassador, political theorist, inventor, musician, and the leading citizen of Philadelphia.

While much of this can be attributed to his brilliance, talent without application is of little value. Nobody knew this better than Franklin, who inspired the book on the Protestant work ethic. To help organize his busy life and better live up to the virtue of order, he created a framework to structure his daily schedule around. It is included in his autobiography.

Franklin's schedule as shown in his autobiography. While the details would change from day to day, he tried to make his daily routine follow this outline (Public Domain).

The first thing you might notice is that he woke up each day at 5. It seems like he really believed that “early to bed and early to rise" business. He then spent three hours getting ready for the day.

One part of this was to ask himself, “What good shall I do this day?" Not only did this refer to what work he needed to do and what he hoped to accomplish, but also to how he would live up to his virtue of the week.

He then turned to his morning rituals, which he listed as “rise, wash, and address Powerfull Goodness! Contrive day's business, and take the resolution of the day: prosecute the present study, and breakfast."

What does all this mean? It's too old-timey to understand.

“Powerfull Goodness!" was his term for God, so that bit means prayer. “Contrive day's business, and take the resolution of the day" means that he then drew up his daily schedule and determined how to carry out that good he dedicated himself to earlier that morning.

“Prosecute the present study" refers to his habit of dedicating time to studying something often unrelated to the rest of the work he had to do that day, like learning a new language. The next part of his day was simply labeled “work." Lasting from 8 to 5, this section was split into three parts. The first section was a four-hour block. He then gave himself two hours for lunch, during which he would also “read, or overlook [his] accounts." Another four-hour work block followed this.

After quitting at five, the last five hours of his day were earmarked for time to “put things in their places. Supper. Music or diversion, or conversation. Examination of the day." This is where he would have placed his myriad social engagements and various hobbies. This also means that many of his achievements fell under the category of “diversion" for him.

He was also sure to ask himself “what good have I done to-day?" in reflection. He would make a note in his journal recording if he had succeeded or failed at living up to his virtue that day.

He then went to bed at 10 and tried to get seven hours of sleep.

Like anybody else, Franklin often had good reasons for deviating from his schedule. In his autobiography, he lamented that his work as a newspaper publisher often required him to see other people when it best suited them, fouling up his system. He explained that:

“My scheme of Order gave me the most trouble; and I found that, tho' it might be practicable where a man's business was such as to leave him the disposition of his time, that of a journeyman printer, for instance, it was not possible to be exactly observed by a master, who must mix with the world, and often receive people of business at their own hours."

Of course, he felt that he was better for the attempt. He explains later on the same page:

"In truth, I found myself incorrigible with respect to Order; and now I am grown old, and my memory bad, I feel very sensibly the want of it. But, on the whole, tho' I never arrived at the perfection I had been so ambitious of obtaining, but fell far short of it, yet I was, by the endeavour, a better and a happier man than I otherwise should have been if I had not attempted it."

Would keeping a schedule help me?

Studies show that people who are more disciplined are happier and get more done. Keeping a schedule is an excellent way to keep yourself on task. While making a schedule and sticking to it might not turn you into Ben Franklin, he would agree that the attempt at improvement is what really matters.

The divisions in his work blocks show that he differentiated between work that required his utmost attention and work that could be done over lunch and saw fit to schedule accordingly. He dedicated time to work each day no matter what the work would be. This diligence undoubtedly helped him get the insane amount of things he accomplished done.

His labeling of the evening as a time for diversions or conversation shows that he understood the value of recreation. He also began each day with an intention and ended it by asking if he had done everything he needed to do.

Ben Franklin was a brilliant man, but brilliance without direction won't get very far. While his attempts to structure his days were often foiled, he thought that the effort made him a better person. His schedule is best suited to life two hundred years ago, but the ideas behind it are timeless and can help everybody better organize their lives.