Ever notice how people with conservative sexual attitudes seem to still cheat at the same rate as their more liberal peers? A new study says you're onto something. 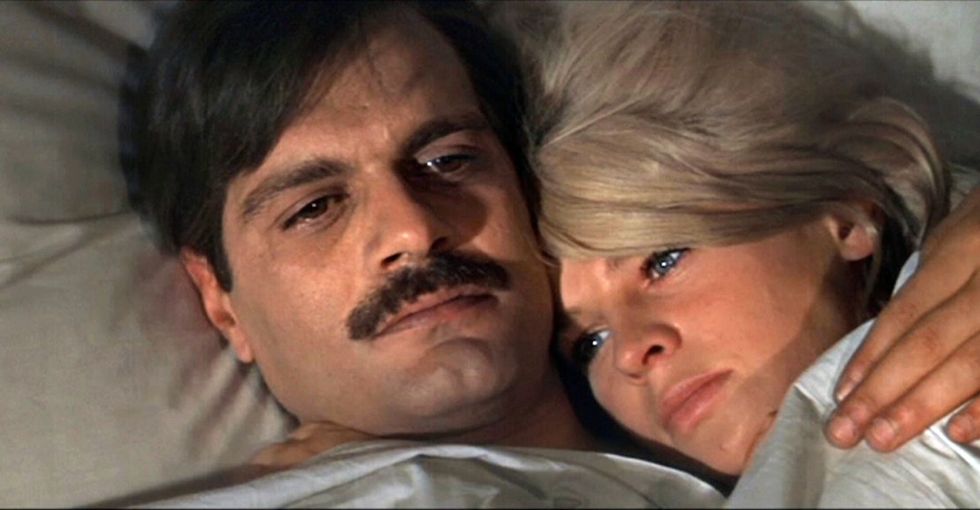 As a general rule, the more politically conservative an American is the more restrictive their sexual attitudes will be. This generalization is supported by polling data, showing that Democrats are more likely than Republicans to say that premarital sex is acceptable, claim to have more partners, and are more likely to admit to having solicited a prostitute.

Likewise, more conservative respondents are less likely to say that they or their spouse have cheated during their marriage.

However, one cannot help but notice that these differences in opinion don’t always correlate to differences in actions. Democratic president Bill Clinton was impeached over an affair, but Representative Tim Murphy and Senator Larry Craig have also been notable for their sexual choices despite being conservative on issues of sexual morality.

Looking to these discrepancies, Kodi Arfer of UCLA and Jason Jones of Stony Brook University sought to find out if the behavior of Americans is in line with their values by taking advantage of the Ashley Madison leak of 2015, which revealed the personal information about the users of the website.

By comparing the information in the leak to voter registration lists in five states, they were able to determine which party has the most cheaters in it. Their study, first published in the Archives of Sexual Behavior, is full of surprises.

Ashley Madison is a dating website focused on people who are already married or in relationships. Given that the website formerly used the tagline “Life is short. Have an affair” it’s reasonable to assume that the people with accounts on the site were not exactly saints.

The researchers understood that asking people who have very restrictive ideas on sex to tell if they had ever deviated from the norm was unlikely to produce accurate data. To get around this, they turned to the Ashley Madison data since there is little other reason for a person to be on the site other than to find extramarital sex. Did they use leaked data for scientific research? Isn’t that unethical?

The authors acknowledge that the initial data was released by unethical means but compare not using it to shutting the stable door after the horse has left. Comparing data which is now out in the world to data which is publicly available is hardly unethical, even if the personal information of the people who used Ashely Madison should never have been released.

Now to the good stuff, the party that cheats the most is….

The study found that Libertarians were the most likely to be members of Ashley Madison, with 1 in 300 members being on the site. Democrats were the least likely to be on it, with no more than 1 in 700 members using the site. Greens, non-affiliated voters, and Republicans fell in between these two extremes.

The initial results are detailed in this graph.


The ratios show the proportion of party members on Ashley Madison. Oklahoma has very strict rules on third parties, explaining the lack of data points in that section of the graph. Credit to Arfer and Jones.

This data doesn’t account for gender differences in party membership though. Given that the Libertarian Party in the four states that were covered here is 63% male while the Democratic party is majority female, the data might be just showing that men are more likely to cheat.

To get around this, the researchers did another analysis of the data which accounted for the gender gap. The results were similar, with Libertarians and Republicans being the most likely to be using the website and Democrats still bringing up the rear.  The results for the state of New York are shown here:

This figure shows the odds that a forty-year-old man in New York would use Ashley Madison, broken down by party. Both of the statistical models the authors used are shown. Credit to Arfer and Jones.

What does all this mean?

The authors of the study say that their findings support the previously argued stance that “people with more sexually conservative values, although they claim to act accordingly, are more sexually deviant in practice than their more sexually liberal peers.”

These findings become particularly strange when you realize that adultery is the one point of agreement between sexually liberal people and sexually conservative people, in that almost everybody agrees it is unacceptable behavior.

The authors of the study can only speculate on why members of parties on the right would commit adultery at a higher rate than those on the left but do give a few ideas. Chief amongst them is the concept that the atmosphere of sexual conservatism, which guts sexual education and reduces overall knowledge of human sexuality, provides an environment where adultery is, ironically, more likely. They argue:

“It would make sense if less sexually knowledgeable people were worse at sexual self-control. More religious people may also have difficulty with sexual self-control if they attempt to rely on supernatural help to restrain their impulses. Perhaps expanding sex education and weakening taboos against the mere discussion of sex are ways by which society could reduce the incidence of adultery.”

It must be noted, however, that conservative Oklahoma had the lowest proportion of voters using the cheating service while liberal California had the highest. This suggests that cultural conservatism might not be the only factor involved.

Similarly, the Libertarian party is not necessarily conservative on sexual issues but is instead insistent that sexual morality is not a proper domain for government intervention. This makes the simple claim that “people who are sexually conservative are more likely to commit adultery” unable to fully explain the data.

Is a person who preaches certain moral values more likely to deviate from those values? The findings of this study suggest that this might be the case, or at least that holding a moral value is no guarantee of exemplifying it. While American politics are unlikely to divorce themselves from sexual morality anytime soon, we can at least look forward to many more moments of schadenfreude for years to come.