You can name a dozen rock stars on drugs, but can you name the philosophers who partook? We're here to help. 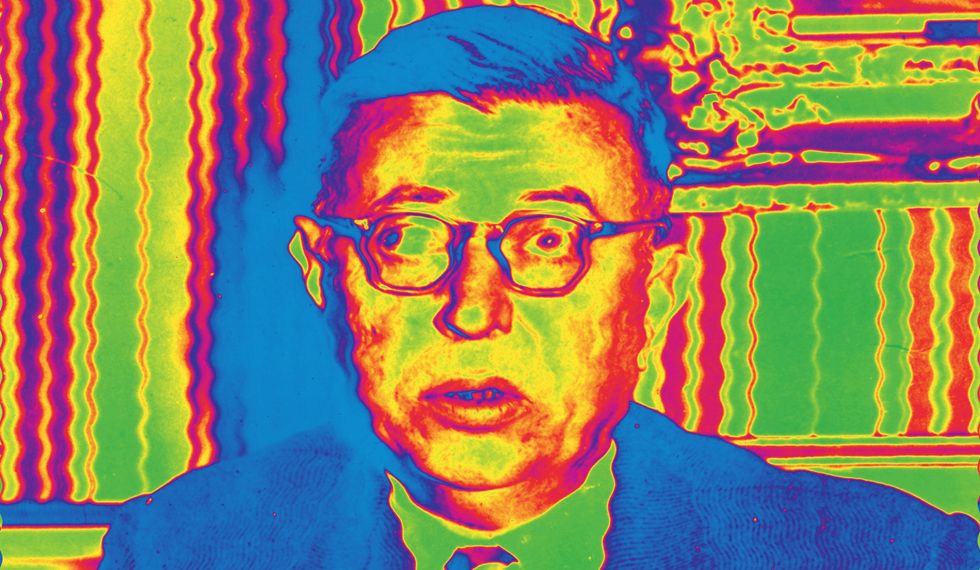 We can all name a dozen rock stars who take drugs but it might surprise you to learn that great minds outside of music like a hit every now and again. Here, we have five philosophers who took hard drugs and how it influenced their work.

Before we begin, remember that these people would have been noteworthy even if they stayed sober and that, at best, the drugs these people took served as tools for getting a new point of view. Trying this yourself is less likely to work out as well.

Sartre in 1940, not pictured are a dozen crabs that he thought were all around him. (Photo by Central Press/Hulton Archive/Getty Images)

A French philosopher, Sartre was one of the greatest minds of 20th-century Europe. He was an extremely prolific writer who explored questions of existence and living as an individual in a conformist world.

Like many college students, the young Sartre had the bright idea to try mescaline as a means to get a new look on reality and explore his consciousness. He had a large dose of the powerful psychedelic injected into his arm, giving him an intense trip.

While he did get his desired perspective out of his misadventure, he also claimed to have visions of crabs for months afterward. They followed him everywhere, and he feared for his sanity. He later decided they were a manifestation of his fear of loneliness and they slowly faded away after he stopped paying attention to them.

How did it affect his work?

Sartre’s breakout novel, Nausea, contained themes that can be seen as drug-influenced, especially when characters make existential breakthroughs. His later play The Condemned of Altona featured a race of crabs who can see through time and judge the actions of 20th-century humanity. A German-Jewish philosopher who worked with the Frankfurt School, Benjamin is one of the many philosophers whose fame came only after his death. He wrote on the history of philosophy, aesthetics, and was a notable cultural critic.

What interests us today is an unfinished book based on his experimentation with hashish. Published after his death, On Hashish explains his methods, experiences, and some of the insights he got out of the trips. Also included are articles which were influenced by the drug use.

He also took opium and mescaline as part of the same set of experiments. He was so dedicated to a scientific approach to the chemicals that he never got a supplier, relying on his doctors, and was always careful with the doses to avoid hampering his powers of observation.

He did think that some of his work was directly influenced by his drug use and kept his records of how the smoke sessions went to help demonstrate the connections. It undoubtedly influenced his ideas on intoxication as explained in his essay Surrealism and likely affected his ideas on how perspectives and interpretations can be applied to the world.

An American philosopher who also had a knack for psychology, James’ work helped to form the school of pragmatism. He was the first educator in the United States to lecture on psychology and was the brother of English novelist Henry James.

James also has the distinction of being the first western philosopher to comment on psychedelic drugs. In his book The Varieties of Religious Experience he related his experimental taking of nitrous oxide (laughing gas) and ether. He also took peyote, chloral hydrate, and alkyl nitrites for similar experiments into altered states.

His drug use reflects a lifelong interest in mysticism and in many ways promoted his efforts in that area. He explained that by warping his consciousness he was better able to grasp the idea of religious experiences as altered states of consciousness as well.

He also, amusingly, claimed that he could only understand the work of Hegel while high. Many analytic philosophers would be inclined to agree with him. A French philosopher of the late 20th century, Foucault examined what lay at the crossroads of truth, history, and power. Foucault died in 1984 and was the first public figure in France to die of AIDS.

He took more than a few chemicals during his youthful party years in the underground gay scene of Paris, and he later claimed to have taken everything short of heroin. It was only later in his life that he seemed to view the trips philosophically.

In 1975, Foucault traveled to California to give a lecture. It was while there that he was convinced to visit Death Valley and take LSD. The trip, which is described here by the man who went with him, involved music, beautiful vistas, and hiking around the desert.

Simeon Wade, the academic who gave Foucault the acid, claimed that the great philosopher wrote to him later about the experience. The letter is said to explain that the trip had moved him greatly and caused him to completely rework his plans on his series The History of Sexuality.

Foucault’s early death prevented the work from being finished, and the notion that the drug trip seriously altered the course of the work he did finish is debatable.

One of the most controversial philosophers of all time, Nietzsche was one of the founders of existentialism and wrote on nihilism as well. His work has influenced many later thinkers and was used to justify the fascist regimes of the 20th century.

While Nietzsche had strong opinions on alcohol, placing it next to Christianity as one of “the great narcotics in European history,” he wasn’t entirely sober himself. He was always rather sickly, had trouble sleeping, and suffered from crippling migraines. In the search for pain relief before the invention of Aspirin, he turned to opium.

He also took chloral hydrate as a sleeping aid. He later became such a fiend for the stuff that he forged prescriptions for himself, signing as “Dr. Nietzsche,” which was technically accurate.

While Bertrand Russell cited his sickly nature as the source of his “power fantasies” the influence of the drugs on his work is harder to pin down. He was taking large does of them during his most prolific period, and it is probable that at least some of his writing must have been done high.

However, given that the themes of self-overcoming seem to contrast rather sharply with taking drugs that make you want to lie down and do nothing, it seems unlikely that his drug use had much of an impact on his content.