Where Is the Plastic in the Ocean Coming From? Try Asia.

It turns out most of the ocean's plastic is coming from a single corner of the world. 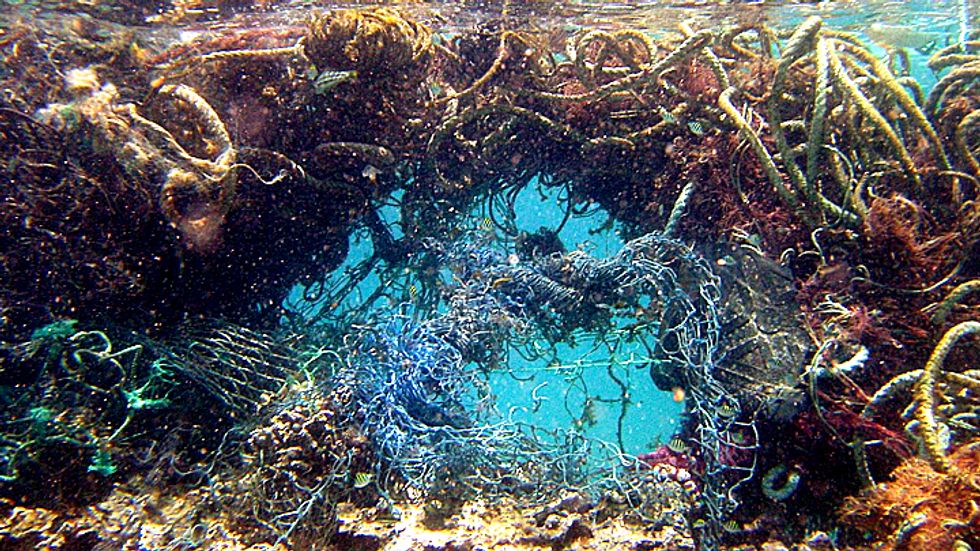 That's like dumping one New York City garbage truck full of plastic into the ocean every minute of every day for an entire year! - Ocean Conservancy

60% of all seabirds and 100% of sea turtles who've been examined contain plastic. They eat it, thinking it's food. Obviously, they derive no nutrition from the plastic, and it can be damaging to their health, or fatal.

There are five massive “gyres," or vortices, of mostly plastic garbage in the oceans, the most famous being the Great Pacific Garbage patch. (#1 in the illustration below.)

Capt. Charles Moore told National Geographic what it looked like in 2003:

“Yet as I gazed from the deck at the surface of what ought to have been a pristine ocean, I was confronted, as far as the eye could see, with the sight of plastic. It seemed unbelievable, but I never found a clear spot. In the week it took to cross the subtropical high, no matter what time of day I looked, plastic debris was floating everywhere: bottles, bottle caps, wrappers, fragments."

And things have gotten much worse since then. Various technologies have been proposed for cleaning up the mess, and people have even made artwork from the flotsam found on beaches, as a means of raising awareness of the problem in a way that's less terrifying than it certainly could be.

Some of the ocean trash is cargo that's fallen off off boats, but most of it is just stray plastic trash. So where is all this stuff coming from?

A study by Dutch firm The Ocean Cleanup and published in Nature on June 7, 2017, found that a full 86% of all the plastics in the ocean come from the rivers of a single, albeit large, continent: Asia.

Three of the four top sources of plastic are Asian countries: China, Indonesia, and Myanmar. (Nigeria's #4.)

Of the world's top 20 plastic-carrying rivers, seven are in China, sending about two thirds of all the river plastic into the sea, according to Quartz. The worst river is the Yangtze, which goes through Shanghai — it contributes some 22,046 metric tons of plastic to the ocean every year. It's nasty stuff, too: Two ships unloaded 110 metric tons of waste including needles and plastic tubes into the Yangtze just last December. India's Ganges is Number 2, followed by China's Xi River.

Per person, Asians generate much less waste than we Western consumers do. The main issue is manufacturing, and China, in particular is a powerhouse in that regard. Quartz cites a report by Plastics Europe which asserts that in 2015, China manufactured 74.7 metric tons of plastics.

Still, before casting a stink-eye at China too quickly, it's worth recognizing just who it is that finances their plastic production. Who buys all the plastic products the country manufactures?That would be us.

And part of the problem is economic, since residents of wealthier nations have their trash picked up and removed to landfills that at least keep the trash out of the ocean. In poorer communities, such as those along the long Asian coastline, there is no such option. Trash ends up on the ground or in the sea.

Aena, 12, in her village (Muara Angke) by Jakarta. Shoreline is smothered by plastic filth. This is what your backyard can look like if you're one of the 3.5 billion humans who don't receive trash pick-up services. #Indonesia

Ocean Conservancy estimates it would take about $4.5 billion yearly to overhaul the insufficient disposal infrastructure of China alone. There's no clear source of the kind of money, and that's just China in any event.

The only real solution — and you can judge for yourself how really real it is —says oceanographer Curtis Ebbesmeyer, “If you produce plastic, it's assured that it will eventually end up in the sea. So we have to stop producing plastic."