Where in the world sugar daddies thrive, why, and what's being done about it

Older, wealthy men exploiting financially strapped young women isn’t new, but it’s an exploding phenomenon with the rising price of higher education and a factor in the ongoing HIV crisis in Africa. 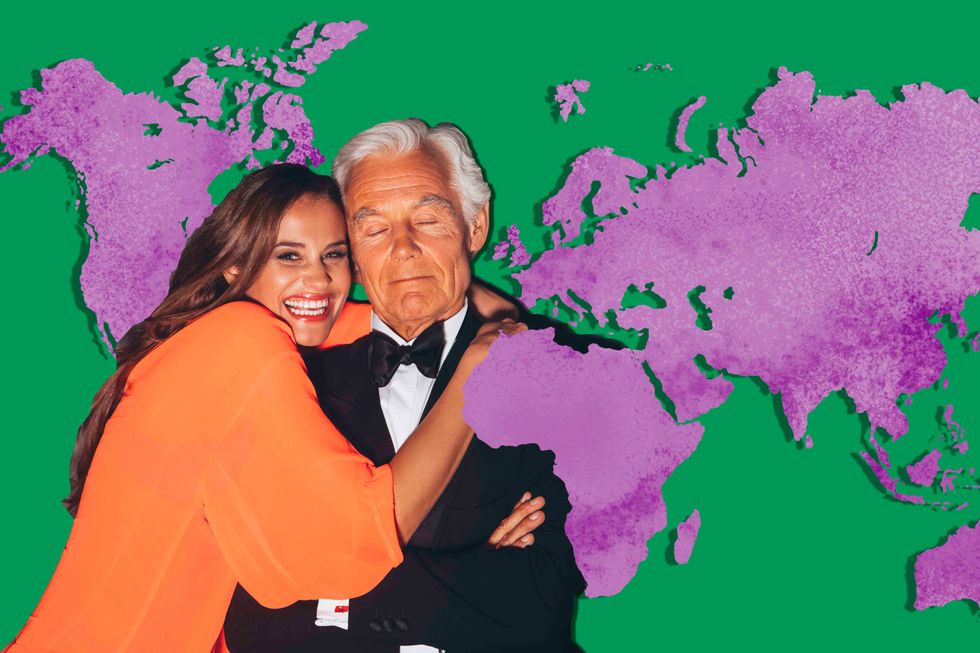 A troubling option for women in need (Kamenetskiy Konstantin/Drima Film)

The older rich man and his much younger girlfriend.

The relationship between the two is rarely stated explicitly, but the arrangement is this: the older man receives companionship (of what kind?) in exchange for compensation. Morally, it's an interesting transaction. Though both parties engage in what's nominally a romance, there's an undeniable exploitation of a young person needing money by someone older who can provide it. He's her “sugar daddy". She's his “sugar baby". This isn't just history — the phenomenon is very much going strong in 2018.

Today, the sugar-daddy business is booming as girls and young women — and some men — struggle to finance their higher education. In Africa, it provides an income for many girls and women, and authorities believe that sugar daddies are the reason that HIV remains out of control across the continent.

A Google search for “sugar daddy" will reveal an entire industry dedicated to this unique form of “dating". The largest such site is Seeking Arrangement, which according to Business Insider, has 10 million clients.

2.5 million of Seeking Arrangement's matched “babies" self-identify as students, with 1 million from the U.S. alone. The arrangements they share with their “daddies" are worked out in advance, and run the gamut from mentor/mentee relationships to arm candy, to sex. According to the site's Alexis Germany, "Some of the sugar daddies have that 'white knight' scenario where they really want to be helping somebody and saving them from their debt — or whatever you want to call it." It's not quite prostitution, and Seeking Arrangement prohibits the direct exchange of money. Babies can have up to four daddies with whom they establish boundaries. One baby, “Christina," tells Business Insider, “I'm not a person that is interested in one-night stands with people who are visiting Vegas for a couple days — that's not interesting to me. If that's what you're going to come at me with, my response is going to be, thank you for the offer, but I'm going to pass." Christina says she's been propositioned anyway.

Finding a sugar daddy can be the only solution a student finds in the face of a mounting higher-education tab. With tuitions steadily rising, Americans owed 1.3 trillion in student-loan debt in June 2017, two-and-a-half times the amount 10 years ago, according to Pew Research. That works out to an average of $28,400 per person, which takes an average of 14 years to pay off.

So the sugar-daddy business is booming, especially in 2014, and in the southern U.S. One school in particular, University of Texas at Austin, saw a 227% increase in the number of its sugar babies between 2013 and 2014.

Vanity Fair recently published a first-person account of what it's like to be a sugar baby. And after Business Insider wrote about the phenomenon, a sugar daddy requested equal time to present his perspective.

In Africa, the sugar-daddy phenomenon carries with it all the moral ambiguity of the Western version, but with an added, potentially deadly, aspect: Sugar daddies may be a significant factor in Africa's ongoing struggles with HIV.

22% of all the world's new HIV infections in 2016 were in young women from West and Central Africa. Those areas contain only 7% of the world's population but 17% of all the people living with HIV, and with 30% of the entire world's HIV-related deaths in 2016.

Even more chillingly, a study of seven African nations revealed that 46.3% of HIV-infected adolescent girls and young women didn't even know that they HIV-positive and could be unintentionally spreading the disease. Only 45% were being treated with retrovirals that control the disease and make it less communicable.

Many experts agree that sugar daddy relationships are part of the cause, including UNAIDS, the U.N. agency for HIV/AIDS. In Africa, these relationships are called "blessings," after the Instagram hashtag #blessed was adopted by some of the young women involved. Johannesburg academic Karabo Sitto tells Reuters, “There is actually a group of women who are happy to be called 'blessees', who own it, who are at the mercy of this person that can provide them with money for as long as they're willing to comply." The men are called “blessers." Nonetheless, "Women often do not have the power to negotiate safe sex in these relationships, especially as some men offer more money for sex without a condom," says Nozizwe Madlala-Routledge of charity Embrace Dignity tells Reuters.

African governments can't do much about the problem other than launch mind-changing campaigns — such as the “Say No to Sugar Daddies" campaign in the South African province of Kwazulu-Natal — that don't address the underlying economic inequality issue.

Meanwhile, non-governmental organizations such as Embrace Dignity and Safe Love International are stepping up to help. Safe Love founder Sandra Omo Idugboe tells Lagos, Nigeria's This Day Live, “The number one thing you can do to change anything is to not be quiet about it. In Nigeria, a lot of people live in denial. They think HIV is something that is so far or something that will never happen to them. They don't understand that it is so close if you take statistics into consideration. So we will go on to teach young girls how to recognize when an older man is preying on you for sex and what to do about it."

Safe Love has brought a 30-minute educational program called “No Sugar Daddy, Bright Future" into Nigerian classrooms, and has already been presented to 10,000 students. Omo says Safe Love's campaign has already been successful in six other African countries. “The younger girl does not even have the mental capacity or the ability to negotiate safer sex and when a lot of these older men are with the younger girls, they will want to take advantage of these younger girls. This is the risk we are [presenting] to these young girls," says Omo.

The underlying problem is economic

How do you feel about these hookups? While it's true that both partners enter them voluntarily, it's also true that at least one party — the one who isn't rich — doesn't feel like she has much of a choice in the matter. In even the most benign of these relationships, the daddy/blesser receives some sort of benefit as a result of taking unfair advantage of a dire need on the part of the baby/blessee. It's unquestionably a nasty perk for the beneficiary of income inequality: Just one more thing money can buy when times are hard enough.