Scientists claim that huge rogue waves account for the disappearance of ships in the Bermuda Triangle. 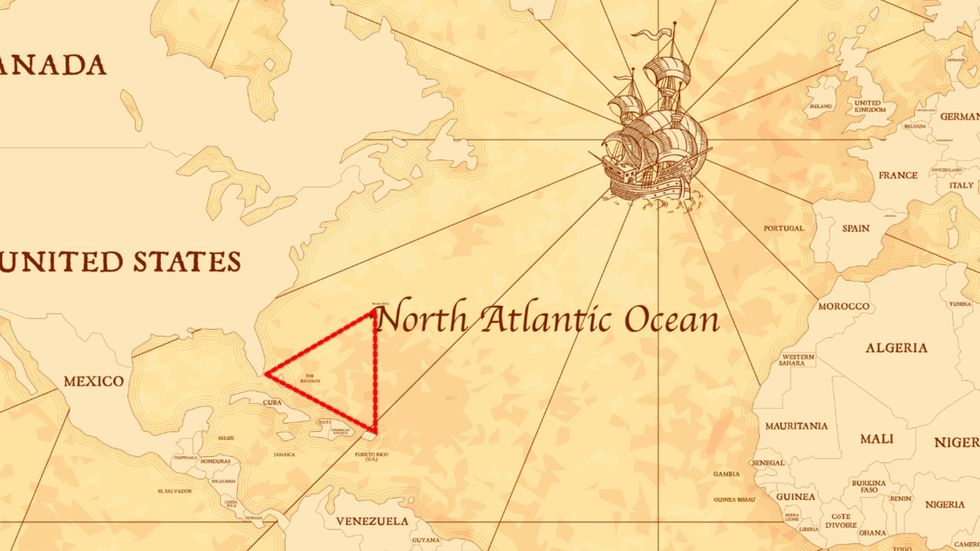 A legendary mystery gets explained at last. Maybe. (pingebat/Shutterstock/Big Think)

If it seems that it was just about a year ago that scientists finally figured out the mystery behind the Bermuda Triangle. The culprits behind the legendary disappearances of ships and planes were said to be powerful hexagonal cloud formations. Except that now, a team led by Simon Boxall, an oceanographer from the Ocean and Earth Science, National Oceanography Centre Southampton at the University of Southampton, claims to have finally finally solved the riddle, and it's not clouds. It's ginormous rogue waves, a legendary maritime phenomenon all their own.

Monsters of the deep

Until the so-called 18.5-meter—that's nearly 61 feet high—Draupner wave was observed, via satellite, on New Year's Day in 1995, it wasn't entirely certain that rogue waves weren't just the stuff of maritime legend. These monsters are terrifying anomalies: Unpredictable massive walls of water coursing across the ocean, capable of wiping out almost anything they happen to encounter.

According to site Freak Waves, rogue waves can have a force as powerful as 100 metric tons per square meter. For a sense of scale, a normal 12-meter wave produces about 6 metric tons of force. Ships are built to withstand about 15 metric tons per square meter. And the Draupner wave was nothing compared to other reported waves, such as the pair that injured 50 passengers a month later when the Queen Elizabeth II ran into them in North Atlantic bad weather. One, at least, was estimated to be about 95 feet high.

"At 0410 the rogue wave was sighted right ahead, looming out of the darkness from 220°, it looked as though the ship was heading straight for the white cliffs of Dover. The wave seemed to take ages to arrive but it was probably less than a minute before it broke with tremendous force over the bow. An incredible shudder went through the ship, followed a few minutes later by two smaller shudders. There seemed to be two waves in succession as the ship fell into the 'hole' behind the first one. The second wave of 28-29 m (period 13 seconds), whilst breaking, crashed over the foredeck, carrying away the forward whistle mast." — Captain of the QE II

What's this got to do with the Bermuda Triangle?

One of the earliest ships to have disappeared in the Bermuda Triangle was the USS Cyclops, which disappeared en route from the West Indies to Baltimore in 1918. At 550 feet long, it was the largest ship in the U.S. Navy at the time, and not a trace of it was ever found. It was carrying manganese ore and had a crew of 309. Its last message before vanishing was “Weather Fair, All Well."

Numerous theories have been put forward over the years about what happened to the ship, including the possibility that it was an unacknowledged casualty of World War I, which had begun a year before its voyage.

Boxall's team suspected the Cyclops was lost to a rogue wave and built an indoor simulation to demonstrate how it might have happened. Says Boxall, “If you can imagine a rogue wave with peaks at either end, there's nothing below the boat, so it snaps in two. If it happens, it can sink in two to three minutes." Other experts, such as Marvin W. Barrash, author of the book USS Cyclops, agree. Barrash told Forces.net, “She had a flat bottom, she rolled quite easily, and on one day she rolled approximately 50 degrees one way, and in the high forties the other way."

Cyclops' sister ships, Proteus and Nereus, also disappeared in the area, and they were also flat-bottomed.

Lovely weather for an aquatic behemoth

Boxall's conclusion that rogue waves were behind other disappearances in the Triangle has to do in part with the area's weather conditions being favorable to such monsters. Speaking on the UK's Channel 5 program “The Bermuda Triangle Enigma," Boxall notes that the Triangle's climate is about right: “There are storms to the South and North, which come together... we've measured waves in excess of 30 meters. The bigger the boat gets, the more damage is done. And if there are additional ones from Florida, it can be a potentially deadly formation of rogue waves."

Having said all that, is the Bermuda Triangle really real?

It depends on who you ask. According to the U.S. Coast Guard, that's a “nope":

The Coast Guard does not recognize the existence of the so-called Bermuda Triangle as a geographic area of specific hazard to ships or planes. In a review of many aircraft and vessel losses in the area over the years, there has been nothing discovered that would indicate that casualties were the result of anything other than physical causes. No extraordinary factors have ever been identified.

The National Oceanographic and Atmospheric Administration, or NOAA, agrees, saying:

Environmental considerations could explain many, if not most, of the disappearances. The majority of Atlantic tropical storms and hurricanes pass through the Bermuda Triangle, and in the days prior to improved weather forecasting, these dangerous storms claimed many ships. Also, the Gulf Stream can cause rapid, sometimes violent, changes in weather. Additionally, the large number of islands in the Caribbean Sea creates many areas of shallow water that can be treacherous to ship navigation.

NOAA does concede that “there is some evidence to suggest that the Bermuda Triangle is a place where a 'magnetic' compass sometimes points towards 'true' north, as opposed to 'magnetic' north.

Still, NOAA finds, “The U.S. Navy and U.S. Coast Guard contend that there are no supernatural explanations for disasters at sea. Their experience suggests that the combined forces of nature and human fallibility outdo even the most incredulous science fiction."

As science writer, Dr. Karl Kruszelnicki told News.com, “the number of planes that go missing in the Bermuda Triangle is the same as anywhere in the world on a percentage basis."

This won't, of course, convince every Bermuda Triangle believer, such as the Reddit member who posted in response to Boxall's theory, “But that doesn't explain the airplanes that went missing in the area…" Says another, “Flown over it a few times. Very disappointed that I'm still alive."