The Bermuda Triangle is a mysterious part of the world where many an aircraft and ship met an untimely end. Actually, whether it’s truly mysterious depends on if you believe something out of the ordinary may be responsible for the seeming overabundance of disasters and inexplicable disappearances that take place in this area in the western part of the North Atlantic Ocean.

The region, also called Devil’s Triangle, is somewhat loosely defined but is very busily traveled. It’s a popular shipping lane that also sees many cruise ships and aircraft. So maybe the disappearance of 75 planes and hundreds of ships isn’t even so unusual statistically. Nonetheless, the Bermuda Triangle persists in the popular imagination as a somehow accursed and enigmatic location.

The author Vincent Gaddis, one of the writers responsible for coining and spreading the story of the Bermuda Triangle, writing in a 1964 issue of the pulp magazine Argosy, defined the boundaries of the area as having vertices at Miami, San Juan (Puerto Rico), and Bermuda.The total size of the region has varied based on who’s been writing about it, from 500,000 to 1,500,000 square miles. Obviously, such a fluctuation in size would affect how many disasters you think happened there.

Here are the rough outlines of the Triangle: 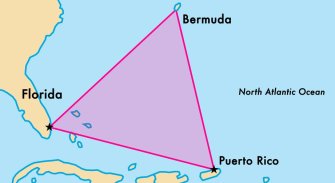 The fact is – there is no real map of the Bermuda Triangle since the U.S. government goes out of its way to indicate it doesn’t buy into the myths. As the National Ocean Service succinctly states, the U.S Navy and the Coast Guard think anything remotely strange can be blamed on “the combined forces of nature and human fallibility”.

What’s more – “the U.S. Board of Geographic Names does not recognize the Bermuda Triangle as an official name and does not maintain an official file on the area.” There are no official maps, and to take it a step further – the Coast Guard collects and publishes accounts of incidents that refute the mysteries any writers may be harboring.

“It has been our experience that the combined forces of nature and the unpredictability of mankind outdo science-fiction stories many times each year,” states the Coast Guard in its official take on the mystery.

The insurance broker Lloyds of London agrees with the Coast’s Guard general attitude towards the Triangle as their internal research shows the area is no more dangerous than others with a similar amount of traffic. The broker charges no special premium for ships passing through the region.

So is the Bermuda Triangle simply a figment of our imagination fueled by opportunistic writers? You can certainly take that point of view or you can look for explanations like the hexagonal clouds that may or may not be wreaking havoc there.

Despite their protestations that nothing unusual is going on, the U.S. Coast Guard gets involved in disappearances in the area on a yearly basis. In 2017, they searched for a small plane that vanished somewhere between Puerto Rico and Florida while carrying a family.

In 2014, the Coast Guard had to rescue a man who tried to trace the boundaries of the triangle in an inflatable bubble. In 2016, the man was back at it, re-attempting a 3,500-mile mission in the bubble. Again, he had to be rescued by the Coast Guard. The story of this adventurer is one reason why the Coast Guard doesn’t want to encourage any more fantastical speculation about the area. While you may think there are aliens involved, the guard has to spend money to attempt dangerous searches for people who get inspired by the stories.

For more on the mysteries (or lack of them) in the area, check out this report:

All roads may not lead to Rome, but many of them lead to wealth and prosperity — even 1,500 years after the fall of the Roman Empire.
Up Next
Starts With A Bang

Black Hole Mergers Might Actually Make Gamma-Ray Bursts, After All

It isn’t just for merging neutron stars, anymore.Over the past three years, there’s arguably been no greater scientific discovery than the direct detection of gravitational waves. The two LIGO detectors, […]