Study: Male bottlenose dolphins have names for each other

A new study of male bottleneck dolphins in Shark Bay, Australia discovers that each individual has his own distinctive name-whistle that other dolphins use when “talking” about him. 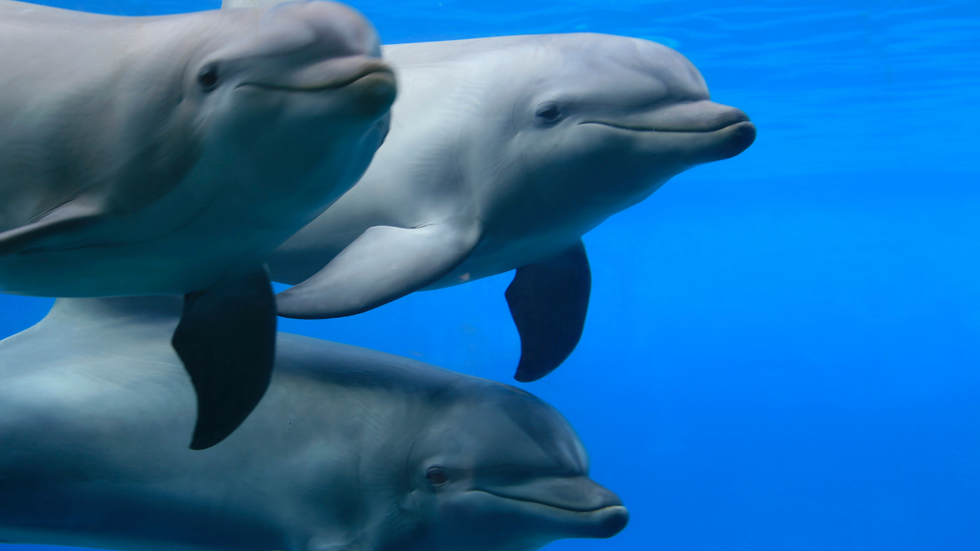 A bottleneck dolphin trio. We don’t know their names, but they do. (R. Maximiliane/Shutterstock)

As far as we knew, we were the only species that identified individuals by name. A new study, however, finds that we’re not: Dolphins, or at least the bottlenose males of Shark Bay, Australia do it, too. We understood that dolphins were smart but this is still pretty wild. The team behind the study, just published in Current Biology, was led by research fellow Stephanie King of the University of Western Australia.

Scientists have been studying Shark Bay bottlenoses for decades, and have discovered some fascinating things about how males form amazingly complex alliances to—as the new study puts it—“cooperate in the pursuit and defense of an important resource: access to females.” Two scientists in particular, Eric Patterson and Janet Mann of The Dolphin Alliance Project, have been responsible for a lot of the insights. As far back as 1987, they wrote:

”We discovered that males in pairs and trios cooperate to sequester and control the movement of ('herd') single oestrous females for periods lasting from less than 1 hour to several weeks."

At the time, they reported partnerships between duos and trios of dolphins—“first-order alliances”—and cooperation between multiple duos and trios, or “second-order alliances.” These clusters together herded females away from competing groups, and protect “their” females from other clusters, so there’s a lot going on.

Apparently, this teaming-up is guys-only: Female bottlenoses don’t organize in this manner.

In 2015, the scientists published ”Male dolphin alliances in Shark Bay: changing perspectives in a 30-year study" in which they report that such alliances can last decades, but can also shift. In addition, they observed a “superalliance” of 14 males were also participants in from 5 to 11 first-order relationships.

Prior to the new study, the assumption had been that individual dolphins may have their own sonic label—or name — only until they form alliances in adolescence, at which time they take on the group’s acoustic signature. The new research finds that this isn’t so and that each one has a name for life.

Dolphin vocalizations consist of three elements—modulated whistles, broadband clicks, and burst-pulsed noises—that they employ at various volumes, pitches, and timbres. The dolphin names appear to be expressed as whistles.

Though these sounds may seem similar to our ears, they’re not. “Each pulse that is produced by dolphins is different from another by its appearance in the time domain and by the set of spectral components in the frequency domain,” researcher Vyacheslav Ryabov told The Telegraph in 2016. Ryabov was talking to the paper about a recording he’d made of two dolphins, Yasha and Yana. When he realized that each was pausing and waiting—and listening?—for the other dolphin to finish before responding, Ryabox realized he was hearing an exchange, a conversation.

In the new study, scientists were able to identify the signature whistles of 17 adult males using acoustic localization—the location of the sounds relative to each dolphin—except for two whistles that were assigned to two males because they clearly didn’t belong to anyone else.

Each of the dolphins’ whistle sound waves, and in the center, a map of their alliances. ((King, et al)

In addition, 12 human judges were employed for registering similarities in whistles that might connote alliances, but “We detected no evidence of signature whistle convergence between cooperative partners in nested bottlenose dolphin (T. aduncus) alliances. Our results differ from prior research, which suggested that closely affiliated male dolphins produce similar signature whistles.” What this means is that if dolphins’ identifying whistles don’t signify an alliance, they likely represent the individuals themselves. Since they “retain individual vocal labels that are distinct from those of their allies” as relationships evolve, expand, and recede, these whistles seem to be their names, plain and simple.

Then there’s cetacean bromance, which seems also to be a thing. The study observed males swimming in sync, and exchanging friendly slaps like human teammates sharing high fives.

As King is heard to exclaim in a video accompanying the study, “This is the coolest thing ever.”