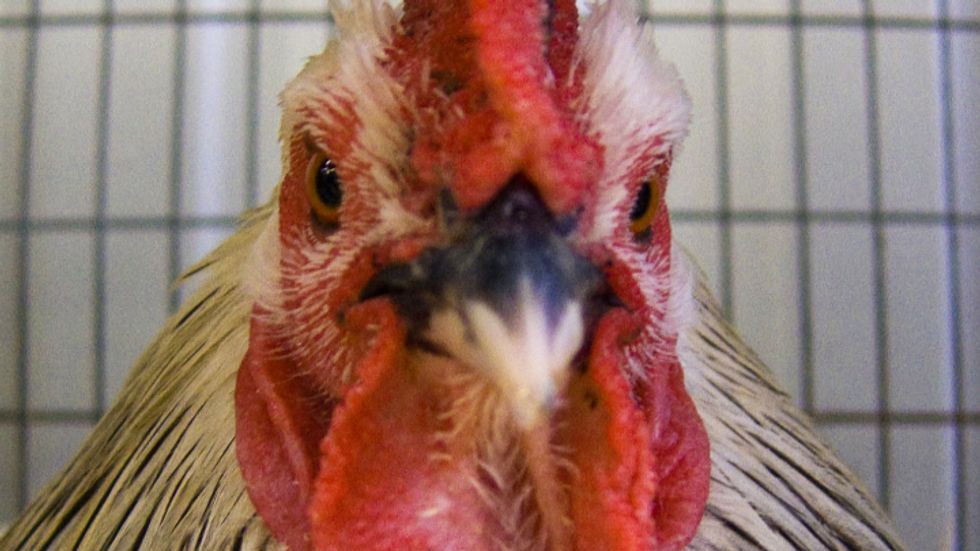 Difficult as it obviously is to know what, if anything, is on an animal's mind, scientists have been piecing together evidence of surprising cognitive abilities in nonhumans. As the research progresses, more and more creatures are turning out to have the biological hardware for thought, even advanced thought in many cases, raising fascinating questions about the intelligence of animals. That dolphins are smart is accepted common knowledge at this point, and researchers have been absolutely awed at the intelligence of octopuses. Studies reveal depressed goldfish — who also turn out to have an excellent memory for faces, Dory notwithstanding — and moody cows. Over the last few years, birds have joined the list of smart animals, supported by evidence that includes the fact that species of crows use tools. Neuroscientist Lori Marino of the Kimella Center for Animal Advocacy asserts that it's time to add chickens, Gallus gallus domesticus, those traditional symbols of brainlessness, to the list of intelligent animals. Marino says, “numerous studies have shown that there is no 'bright line' between 'avian' and 'mammalian, intelligence and complexity," and she's just published a new study of peer-reviewed scientific data in Animal Cognition titled “Thinking Chickens: a review of cognition, emotion, and behavior in the domestic chicken" that supports the notion that chickens are no exception. (Marin's animal cognition work has previously been featured in National Geographic.)

Chickens belong to the order Aves, AKA birds. As Marino writes, the order “has been the focus of a revolution in our understanding of neuroanatomical, cognitive, and social complexity. Some birds are now known to be on a par with many mammals in their intelligence, emotional sophistication, and social interaction." Unfortunately, she notes, the world has been slow to associate the science with chickens. Part of this is, no doubt, because so many of us eat so many of them, and thus would prefer not to consider the impact of brutal [TRIGGER WARNING] chicken-production systems on potentially sentient creatures.

The result of this, Marino notes, is that chickens are “almost entirely invisible to human awareness. Even when they are the subjects of research, the framework is typically one related to their 'management' as a food source." They're seen, says Marino, as a commodity, even though most of us have had personal experience with individual chickens. The estimated 19 billion of them make chickens the most common domestic animals in the world. Maybe it's their inscrutable, seemingly blank stares (not that cats are much more expressive).

What Chickens See, Hear, and Feel

Before testing to assess chickens' cognitive abilities, scientists have had to first get a grasp on what the birds can perceive.

Marino cites research that reveals chickens to have highly developed visual abilities, including the enviable ability to “focus close-up and far away at the same time in different parts of their visual field." They also see a broader range of colors than we do.

Chickens' hearing is also quite good, since they hear low and high frequencies at a variety of volumes, and may even be able to hear lower-pitched, subsonic sounds than we do, below 20 Hz.

Their skin contains numerous receptors for pressure, temperature, and, yes, pain, but it's their beaks that are especially interesting. As in other birds, it's a complex sensory organ packed with nerve endings including a cluster of extremely sensitive mechanoreceptors at the tip that give the bird the ability to identify objects by touch. (Chickens are often “de-beaked" in production, which is believed to be extremely painful for them.)

Here's Marino's summary of the experimental findings cited in her study:

We've long flattered ourselves with an assumed superiority to other creatures, but really, this evaluation is just based on the trickiness of assessing animals' capabilities. After all, we can't just ask them, as they don't speak our language, or maybe even perceive their surroundings exactly as we do. Recent research though, has — or should have — a humbling effec,t and lead us to a more balanced view of where we stand among the earth's creatures.