How far does one need to go to get banned from Twitter? For the sake of argument, would Twitter have blocked Hitler from spreading his opinions? What about other world leaders who govern in what has now been expanded to the whopping 280 characters?

It’s no secret the 45th President of the United States is an avid Twitter user, employing the platform to drive his agenda and pick battles with foreign leaders, like the recent incident of him seemingly getting into a war of words with Kim Jong Un over who has a bigger nuclear button.

Perhaps responding to repeated calls to ban President Trump, whose Tweets often incite controversies, Twitter released a statement on how it treats world leaders on its platform. While not mentioning Trump by name, the company said that its mission is to “help advance the global, public conversation.” As such, blocking world leaders, who “play a critical role in that conversation because of their outsized impact on our society,” would not be constructive and helpful to the flow of information and necessary debate. 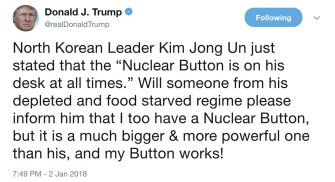 President Trump’s tweet at Kim John Un about the size of nuclear buttons provoked much condemnation.

In fact, any kind of blocking would be counter-productive, insists Twitter.

“Blocking a world leader from Twitter or removing their controversial Tweets would hide important information people should be able to see and debate,” read the statement. “It would also not silence that leader, but it would certainly hamper necessary discussion around their words and actions.”

Twitter maintained that their policy is to remain unbiased while their employees do enforce rules and review posts by leaders “within the political context that defines them.” Furthermore, the company values discussion and thinks that’s “the best way to help our society make progress.”

There are some Twitter users that do go too far for the company’s taste. It recently banned several accounts associated with the far-right group Britain First, whose anti-Muslim videos were actually retweeted by Trump.

Twitter’s new rules also specify that it would ban “violent extremist groups” and those who promote hate, abuse and threaten physical harm. Which leads us back to Hitler – would his account be newsworthy enough for Twitter? Chances are, with him being a world leader, the pre-World-War-2 Hitler would be quite a Twitter mainstay.
—

Related
Starts With A Bang
The Universe’s most unbreakable symmetry
The combination of charge conjugation, parity, and time-reversal symmetry is known as CPT. And it must never be broken. Ever.
13.8
The weirdness of quantum mechanics forces scientists to confront philosophy
Though quantum mechanics is an incredibly successful theory, nobody knows what it means. Scientists now must confront its philosophical implications.
Neuropsych
Why is a Starbucks loyalty rewards program making customers so angry?
The rewards price to get a free cup of hot coffee at Starbucks is going up.
Empowering growth
7 essential management training topics for every team leader
From emotional intelligence to problem solving, these management training topics will set team leaders up for success.
Thinking
What if you could rewire your brain to conquer suffering? Buddhism says you can
For Buddhists, the “Four Noble Truths” offer a path to lasting happiness.
Up Next
Surprising Science
This popular pain reliever could impact male fertility
Short-term use isn’t a problem. Long-term use however may come with lots of side effects.