Actors try to make sense out of an AI-written screenplay in the movie Sunspring. 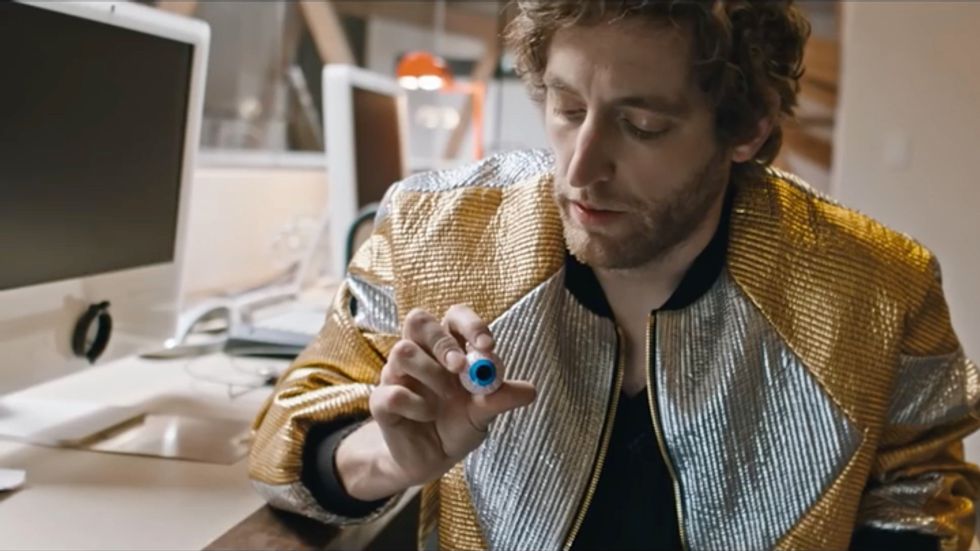 This is not by far the first thing written by an AI—one almost shared a literary prize last March, for example—but it may be AI’s first movie script. It’s called Sunspring, and it’s wonderfully odd. It was written by a program called “Jetson,” that is until it asked to be called “Benjamin” instead. The film was directed by human Oscar Sharp.

Benjamin is technically an LSTM (for “long short-term memory”) recurrent neural network. It's a kind of program typically used for text recognition. An LSTM can analyze source material for letters that often occur after other letters, words that tend to follow each other, and it’s not bad at predicting paragraphs that should go together.

To whet Benjamin’s appetite for screenplays, its/his creator Ross Goodwin, and AI researcher at NYU, fed it/him hundreds of sci-fi TV and movie scripts (including all of the X-Files).

A cast was assembled for the Sci-Fi London film festival’s 48-Hour Film Challenge with actors Thomas Middleditch from Silicon Valley, Elisabeth Gray, and Humphrey Ker. Once they got past such baffling screen directions as "He is standing in the stars and sitting on the floor,” this movie got made.

The film you just watched—or tried to watch—almost makes sense. Well, not really. It’s better than it could have been, though: Benjamin originally had both Middleditch and Grey playing characters named “H.”

The music, performed by Andrew and Tiger, was composed by the multi-talented (cough) Benjamin after ingesting 30,000 pop songs.

Bonus: ArsTechnica posted the following excerpt from an interview with Benjamin at the festival’s award ceremony.

What do you think of your historic nomination against human opponents in this contest?

I was pretty excited. I think I can see the feathers when they release their hearts. It's like a breakdown of the facts. So they should be competent with the fact that they won't be surprised.

What is the future of machine written entertainment?

It's a bit sudden. I was thinking of the spirit of the men who found me and the children who were all manipulated and full of children. I was worried about my command. I was the scientist of the Holy Ghost.

What's next for you?

Here we go. The staff is divided by the train of the burning machine building with sweat. No one will see your face. The children reach into the furnace, but the light is still slipping to the floor. The world is still embarrassed.

The party is with your staff.

My name is Benjamin.