How blockchain can create a more humane process for refugees

Blockchain technology could help alleviate the struggles of asylum seekers who are many times left in the wake of political fights. 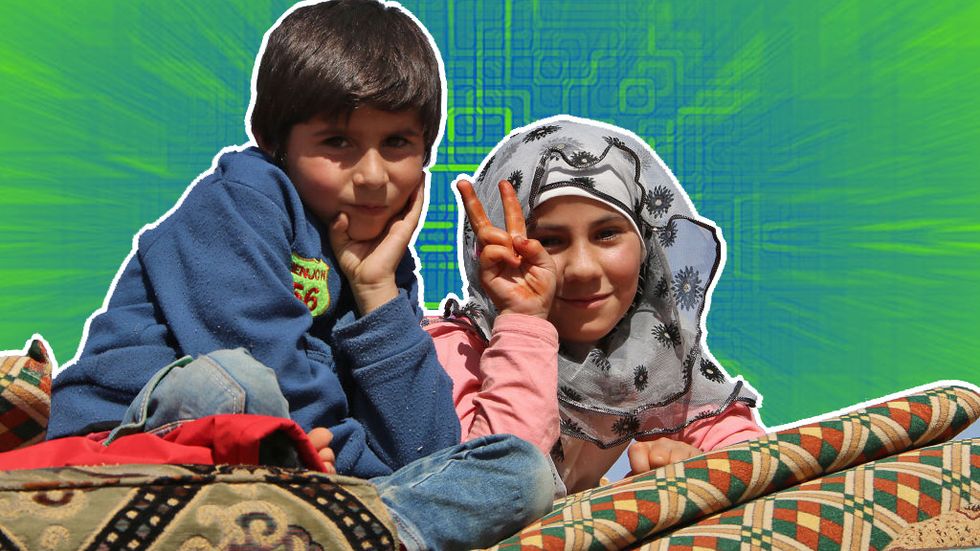 Syrian refugees gesture as they ride on a vehicle getting ready to cross into Syria from Lebanon on June 28, 2018. Hundreds of Syrian refugees have begun returning home. (Photo by STRINGER/AFP/Getty Images)

The current political controversy surrounding immigration in the United States has once again thrown into sharp relief the plight immigrants, refugees, and asylum seekers face when crossing international borders. The situation in the U.S., including the separation of children and indefinite detainment of illegal immigrants, has also highlighted the need for systems that can make immigration agents’ work easier and guarantee that families are kept together and treated with respect and civility. We’ve been seeing more and more stories emerge of parents looking for their children unsuccessfully, and of asylum seekers being detained indefinitely without due process. Ships carrying refugees from Syria and other war-torn areas have been making their way to Europe regularly over the past few years, raising tensions, creating a massive workload for immigration officials, and making it hard to provide refugees and asylum-seekers with the help they truly need.

Recently, blockchain has been making waves in many industries with its transparency and security-oriented technology. In the field of migration, asylum, and refugees, there are already several projects that have shown many areas where blockchain could help alleviate the suffering and struggles of those who are many times left in the wake of political fights. From tracking funding and aid to offering refugees financial services and even improving the processing of asylum requests, blockchain could revolutionize the way the world welcomes refugees.

Lack of transparency and accountability

Migration and asylum in the 21st century remain not all that different from how they looked 50 years ago. Despite the major improvements in technology and systems that can track and store information, asylum seekers and illegal immigrants are rarely carrying the type of documentation most countries require of foreign nationals. Moreover, the process can be murky from a government standpoint, raising questions about who gets detained and who doesn’t. According to Kristian Hollins of the Lowry Institute, the problem is one of unclear responsibilities:

“For states in receipt of asylum seekers, the challenge of verifying an identity is well known, and most states have developed legislative and procedural requirements to meet it. Yet there is no recognized international consensus about how to best establish an individual’s identity.”

Even if migrants do make it to their destinations safely and asylum seekers are admitted to their new temporary homes, tracking of all their vital data and records can become difficult in large bureaucracies that don’t have standardized informational practices. For asylum seekers with few actual records, misplaced information can lead to delays that result in prolonged detainment, incarceration, and even deportation in some cases.

In refugee camps and asylum seekers’ temporary housing specifically, providing aid and delivering it can be a tricky task, particularly in countries with less-developed informational infrastructure. Missing donations and supplies, misappropriated funds, and poor resource allocation are rampant problems for management and life in refugee settlements. This also includes a deep lack of transparency, which makes it harder to hold those responsible accountable.

How Blockchain can protect identities and thwart corruption

Blockchain technology has been making inroads in several fields due to its disruptive potential and the many applications developers have been able to uncover for its budding architecture. One of its biggest advantages is its informational storage capacity, which distributes an instantly verified and complete record of any transaction to every node in its network. This model enforces transparency, as everyone can see every transaction made, and the information is immutable once on the distributed ledger.

This informational capacity makes blockchain an ideal tool to improve accountability, tracking, and resource allocation for governments assisting migrants and asylum seekers. According to Robert Opp, the World Food Program’s Director of innovation, “There are a number of potential uses for blockchain that could dramatically change the way we reach people in terms of our efficiency, effectiveness, and security.”

One of the first and most necessary applications for blockchain in the sector is in distributing aid funding. Organizations like the Start Network have already implemented solutions in the field. The group of organizations uses blockchain to expedite the delivery of funds and track every dollar from donor to assisted individual. The organization built a platform named Dorcas which allows organizations to directly fund the projects they are supporting without having to resort to banking institutions or government authorities. With Dorcas, organizations can transfer funding directly in a peer-to-peer manner with no intermediaries, resulting in no fees, no risk of disappearance, and no time wasted waiting for funding to be processed. This is especially important in countries where the rule of law is weakened, or where corruption often causes funding to disappear before reaching their destination.

Moreover, blockchain can help authorities track and keep records of asylum seekers from the moment they arrive at the border until their legal process is completed, something that is not quite possible or effective currently. Blockchain technology has been shown to be useful at storing users’ identities safely and sharing it for verification. In the world of immigration, it’s important to track visitors’ records and history against their requests. Blockchain’s immutable ledger makes it easier to keep that data, thereby avoiding potential problems stemming from lack of transparency.

Missing paperwork and verification can slow down processing and keep people in detention for longer. (Credit: Crossroads Foundation via Flickr)

Microsoft and other corporations have partnered with the UN on a global ID system for refugees, a prototype of which was recently unveiled, which could help ease the complicated process of absorption. An identification system for immigrants could give them access to services that are currently unavailable. David Treat, a managing director, believes this is a vital concern, as “without an identity, you can’t access education, financial services, healthcare, you name it. You are disenfranchised and marginalized from society.”

Finally, immigrants and refugees live in a state of instability, with their homes, routines, and sense of normalcy forcibly removed. One of the biggest hardships this brings is the loss of financial agency and freedom. In refugee camps, individuals live largely at the mercy of government officials and organizations that deliver aid.

Countries like Finland have also looked at ways to help asylum seekers and refugees fit into their new communities. The Nordic nation has started handing out blockchain-based prepaid debit cards to immigrants to ease the adjustment process. This technology empowers refugees by giving them a way to be independent and assimilate into their new surroundings. Immigrants can use their cards at a wide variety of businesses and the cards help the government track their spending and identity, giving them access to government services and making their integration into society easier.

Although blockchain isn’t a silver bullet to fix the many systemic problems in the current model of immigration and asylum seeking, it can help. According to German NGO RESET, “While blockchain is arguably a cheaper methodology for record keeping over traditional software, the tangible benefits are that it retains a transparent, instantaneous and indisputable record of transactions. This dramatically reduces problems caused by corruption or theft and provides accountability to all parties.”

By alleviating the biggest problems that face the sector—transparency, identity tracking, and individual agency—the technology can improve the living conditions of refugees and empower immigrants around the world. With more organized methods to distribute aid, it will also be more effective, improving the lives of countless refugees. Overall, blockchain could deliver a more humane strategy to treat those seeking refuge from the storms they leave behind.