If companies in developed economies want to continue to grow, they’ll have to face an uncomfortable fact: the talent pool they’ve traditionally relied on will be shrinking for generations to come.

Leading reasons for this decline include increased costs of living, more social and business opportunities for women, and better health care which affords people the opportunity to live longer.

That trend is reversed in poorer nations where birth rates remain high and greater opportunity may lie elsewhere. Add to this the relative ease of modern transportation and communication, and the global population, i.e. the global workforce, is growing more diverse. 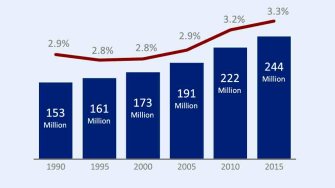 The international migrant population globally has increased in size but remained relatively stable as a proportion of the world’s population. (UN World Migration Report 2018)

Migration patterns predominantly reflect economic realities. Countries that offer economic opportunity receive net migration inflows, while countries that do not will steadily lose a portion of their population. In 2015, the Congo ranked as the world’s poorest nation and its population was composed of 545,000 immigrants; meanwhile, 1.3 million native Congolese had left the country. That same year, war-torn Afghanistan contained 382,000 migrants within its borders while 4.8 million native Afghanis had left.

Of the 46.6 million immigrants living in the U.S., 25 million are employed and provide essential financial muscle to our nation. Immigrants participate in our labor force more than native-born citizens, yet earn less; there are more immigrant business owners than native-born, and immigrants start them at a higher rate; over half of the 87 private companies valued at over $1 billion were founded by immigrants.

Migration flow is likely to increase during turbulent times. Political instability and climate change disproportionately affect the world’s poorest regions, putting them at an additional disadvantage when they look for better economic opportunity abroad. Refugee populations are perhaps the least stable of any migrant group and also the most desperate for new opportunity. 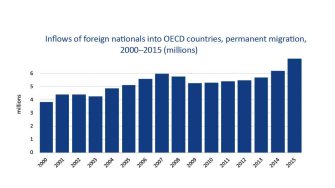 Many asylum seekers cannot be employed without a bank account. And if financial assets cannot be secured during grueling and uncertain travels, refugees’ chances of integrating into a new society will suffer.

Turning a blind eye to refugee populations is not helping anyone, and the world is losing valuable human assets as a result. Cryptocurrencies offer one potential solution.

Banks and governments around the world are now investigating this technology. Its decentralization makes hacking into it virtually impossible. (“Block” and “chain” are the two components of the transaction ledger; “blockchain” conveniently describes this process.)

A foundational tenet of cryptocurrency is to offer everyone around the planet a safe place to store their money that is not dependent on any singular institution or government. Some organizations are betting blockchain will provide such access.

In recent years, for example, over 800,000 Rohingya (a predominantly Muslim group living in Buddhist Myanmar) have fled to live in refugee camps in Bangladesh. One crypto token, ExsulCoin, has implemented financial rewards for students in the camps, inspiring higher attendance and better grades to prepare the refugees to enter the workforce. 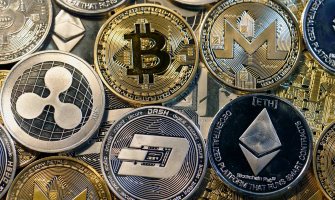 The donation will go towards a GiveDirectly campaign in Uganda aimed at providing more than 12,000 refugee households with a grant to change their life by enabling business growth and other opportunities fueled by investment.

Opening in 2013, the charity, GiveDirectly, has raised over $200 million for refugees. The organization is exploring more opportunities with blockchain technology to provide direct access to those in need from donors.

At a time when some governments have balked at using cryptocurrencies, the Finnish government has turned to blockchain as a way to accept a large number of immigrants.

A Helsinki-based start-up, MONI, has provided prepaid Mastercards and now believes that crypto accounts will allow digital identification and safe storage for their money, which can more easily be transferred to local currency if need be. Since many immigrants don’t have legal identification, even the United Nations is exploring blockchain that would provide them with a digital identity.

There will likely be a skills gap between asylum seekers without so much as a bank account and multinational corporations seeking highly trained professionals to innovate their business. But global migration flows cannot be ignored as a source of potentially valuable employees.

Ignoring individuals that don’t fit the typical mold of a model worker risks losing out on innovative talent, and falls victim to prejudices that tell us, for example, the economically disadvantaged have less to contribute to society.

Astrophysicist Michelle Thaller explains how a solar storm could wipe out civilization… and what we can do to prevent catastrophe.
▸
5 min
—
with
Michelle Thaller
High Culture

The Russian writer’s scorn went beyond a difference in taste; Leo Tolstoy virulently hated everything Shakespeare had come to stand for.
Up Next
Technology & Innovation

On April 20, Nintendo will release Labo, a new gaming system that tasks kids with creating interactive games with cardboard cutouts and the Nintendo Switch.