Americans are becoming increasingly polarized. This applies not only to our political ideologies, but to our opinions on those who disagree with us. We often think the worst of them without any reason to suspect it. They must be morons, mislead, or at least vicious people. We find no reason to suppose they might be decent, intelligent persons. It is in the interest of attacking that conception that we introduce Professor Daniel Bonevac of the University of Texas at Austin. He works in that university’s philosophy department, and has written several books on logic, ethics, and metaphysics. He has become rather noteworthy for speaking out in his support of Donald Trump. Here, we show you his lines of thinking.

When asked why he spoke out, he mentioned the above stereotypes in an interview with Times Higher Education: “There was a narrative developing—especially on campuses, but in parts of the media, too—that Trump’s appeal was entirely with uneducated people, and that anyone with college education shouldn’t even think of supporting him.” 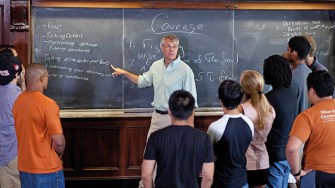 He says that Trump won his vote for two reasons, the first was: “I think he correctly identified the dangers of a globalist attitude that threatened to overturn the interests of the United States.” The second being his opposition to the administrative state, “Someone in the EPA suddenly wants to shut down the coal industry? No one voted for that. There was no act of Congress. This was something issued from that bureaucracy… More and more of our life is controlled by those kinds of things, and Trump was the only candidate who saw that this was the chief political problem in the US right now.” When asked about the first few weeks of the Trump administration, he stated that he was “thrilled” at the appointments and general direction of action.

Of course, these views are coming from a man on the right-wing—in fact, he claimed Betsy DeVos was “too far to the left“—but they are views which are extrapolated rationally from his values. For example, his fundamental objection to the administrative state is based on a desire for democratic rule and accountability. Saying, “Woodrow Wilson and other progressives created this monstrous bureaucracy of Washington, which has increasing control over people’s lives without any accountability.” While most people would say they support accountability and democratic control of government, it is the manifestation of these values that leads to disagreements.

While we may disagree with the professor, it is difficult to call him stupid with a straight face. He is a reminder that both sides of the political aisle have intelligent people who have thought-out reasons for why they voted they way they did. To pretend that such as man as Professor Bonevac doesn’t exist is to do a great disservice to both others and ourselves.

Read the full interview ‘The Only Conservative Scholar on Campus?’ at Times Higher Education.

Is that what Jesus would have responded to the poll from Pew Research Center?
Up Next
Culture & Religion

The world’s first malaria vaccine will be released in Ghana, Keyna, and Malawi in 2018. While malaria was eradicated in the US by 1951, it still kills over 400,000 people worldwide each year. Will this vaccine help eradicate malaria?