To say that the current election is stressful and divisive is beyond an understatement. The United States is strained at the seams, ready to explode no matter who wins the presidency. A new study shows just how bad it’s become, with anger at the opposing party now outstripping the love a supporter might have for their own party. To put it in other words: People hate those on the opposite side of the political spectrum more than they care for their own.

Is this a recipe for disaster? The study describes the current political attitudes in the country as “political sectarianism,” linking it to religious fervor. The research also shows that, for many, political identity has become their primary identity.

The study’s lead author Eli Finkel, professor of social psychology at Northwestern University, described the dangers of the situation:

“The current state of political sectarianism produces prejudice, discrimination and cognitive distortion, undermining the ability of government to serve its core functions of representing the people and solving the nation’s problems,” said Finkel. “Along the way, it makes people increasingly willing to support candidates who undermine democracy and to favor violence in support of their political goals.”

Finkel’s conclusions are based on a survey of dozens of published researched studies, going back to the 1970s. The research drew on the expertise of co-authors from six disciplines: political science, psychology, economics, sociology, management as well as computational social science.

The authors identified three specific behavioral reasons that have led to political sectarianism:

1. “Othering” – seeing the other side as different.

2. “Aversion” – seeing the other side as unlikable.

3. “Moralization” – seeing the other side as immoral.

The scientists found that while people have kept their positive and warm feelings towards their own partisans, the predominant sentiment towards the other party has turned to outright hatred.

The study’s co-author James Druckman, political science professor at Northwestern, thinks that not only have things become much worse in the past decade, “there is no sign we’ve hit bottom.”

“As much as the parties differ from one another, partisans perceive even greater differences, believing, for example, that the other party is ideologically extreme, engaged and hostile,” explained Druckman. “Correcting these types of misperceptions could partially vitiate sectarianism.”

If you’ve been following the state of the electioneering in the U.S., such a conclusion is no surprise. It has become commonplace for partisans to pour vitriol on those they disagree with, slinging unfounded accusations and personal slurs, unfriending them on social media, yelling at them in the streets. Is widespread violence not far behind? 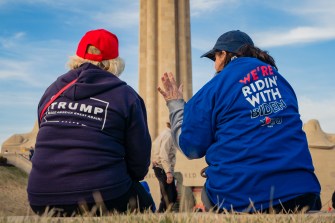 The authors identified specific causes for the growing political sectarianism:

How do we stop the bitterness and anger from spreading, further endangering our democracy and the very survival of the United States? Perhaps not surprisingly, the researchers encourage dialogue with the other side, along with working to correct misconceptions people have of those on the opposite side of the political spectrum.

“If the differences between Democrats and Republicans really were as extreme as Americans believe, that could help to explain the contempt,” Finkel noted. “But these differences exist more in people’s heads than in reality. There’s a whole lot of common ground, but Americans struggle to see it.”

The researchers also suggest other measures like adjusting social media algorithms to prevent the spread of false or hyperpartisan information, incentivizing politicians to reach out to a wider group of Americans, instituting campaign finance reforms, and preventing partisan gerrymandering.

If you’re wondering how the U.S. compares to other countries, research from Brown University released in January 2020 found that the polarization in the U.S. has increased much more from the late 1970s than in the eight other countries the scientists studied—the U.K., Canada, Australia, New Zealand, Germany, Switzerland, Norway and Sweden.

Check out the new study “Political sectarianism in America” published in the journal Science.

Every Christmas could be the last Christmas.
Up Next
Neuropsych

Why you should type less, talk more, according to science

Lack of communication and collaboration are the biggest struggles facing remote workers.