When did you last pick up the phone to a coworker or friend instead of firing off an email or text message?

In these days of remote working and social distancing, a simple phone call could make us feel more connected and boost well-being, according to scientists.

Researchers in the US conducted tests in which they asked participants to reconnect with an old friend, either via phone or email, and another in which participants were asked personal questions by a stranger – by video, voice or text.

Participants found that talking to someone and interacting with them helped them feel more connected. The person’s voice, even without being able to see them, was important in bonding.

But the study also found people hold back from speaking to others, choosing email and texts instead, wrongly believing that a conversation could be awkward or that they could be misunderstood.

“People feel significantly more connected through voice-based media, but they have these fears about awkwardness that are pushing them towards text-based media,” study co-author Amit Kumar, a McCombs School of Business assistant professor of marketing, told Science Daily.

In the experiment in which researchers asked people to phone an old friend, participants predicted the conversation would be awkward and that they would prefer to email.

In reality, people reported forming a “significantly stronger bond with their old friend on the phone versus email, and they did not feel more awkward,” Kumar said.

And the call took no longer than reading and responding to an email.

“We’re being asked to maintain physical distance, but we still need these social ties for our well-being – even for our health,” added Kumar. 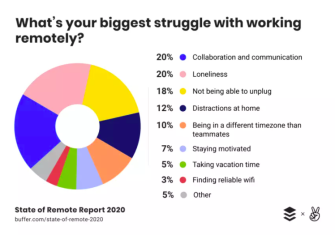 COVID-19 is changing how we work

In May, 42% of Americans aged 20-64 earning more than $20,000 were working from home full-time, according to a Stanford University survey – compared to just 2% working full-time from home before the pandemic.

And many want to keep working from home. An Adecco survey of 8,000 workers and leaders in eight countries found three out of four employees preferred more flexibility and a hybrid approach to working – part at home and part at the office.

But lack of communication and collaboration – and loneliness – were reported as the biggest struggles of remote workers in Buffer’s 2020 State of Remote Work survey (based on 2019 data).

The World Economic Forum’s virtual Jobs Reset Summit is discussing the creation of new jobs and new standards in digital, on-site and hybrid workplaces, as well as the safety nets needed for the employees of the future.

As working from home continues, encouraging employees to adopt good habits in connecting and communicating in person with others could improve both well-being and productivity.

Are psychopaths cold-blooded murderers? Not usually.
Up Next
Health

The researchers trained the model on tens of thousands of samples of coughs, as well as spoken words.