In 2020, researchers at Stanford and Brown University published a study outlining how political polarization is accelerating quickly in most developed nations and especially in the U.S. The study aligned with prior research showing that more Americans are reporting stronger negative feelings toward people in political parties other than their own.

That may sound obvious. But what’s more mysterious are the drivers of political polarization. Some blame news outlets, the proliferation of social media, economic downturns, or political figures.

A new study proposes a psychological hypothesis: The intolerance of uncertainty drives people to see the world through a partisan lens. In other words, people who see the world in black and white are more vulnerable to ideology.

Although previous research has proposed that uncertainty intolerance drives political polarization, the new study is the first to show that this phenomenon seems to apply to both the left and the right.

“One theory posits that polarization arises because holding extreme political views satisfies a need for certain and stable beliefs about the world,” the researchers wrote. “This suggests that intolerance to uncertainty may play an outsized role in shaping polarized perceptions.”

The researchers invited 22 liberals and 22 conservatives to participate in a study for which they watched three video segments while fMRI recorded their brain activity. The segments included “a neutrally worded news segment on a politically charged topic [abortion; PBS News], an inflammatory debate segment [police brutality and immigration; 2016 CNN Vice Presidential debate], and a nonpolitical nature video [BBC Earth].”

The participants then answered questions about their understanding of and reactions to the videos, political orientation, and tolerance of uncertainty. 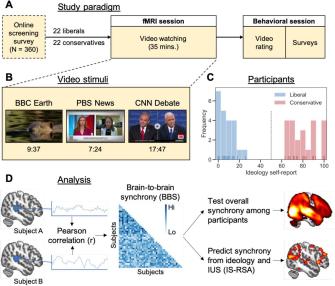 As uncertainty-intolerant people watched the inflammatory debate, their fMRI data showed remarkably similar activity in regions of the brain associated with social and emotional processing, including the bilateral temporoparietal junction (TPJ), right anterior insula (rAI), and precuneus. But there were differences based on party affiliation: Liberals’ activity was synched with other liberals, while conservatives matched other conservatives.

“This suggests that uncertainty-intolerant individuals see the political world through a stronger partisan lens, construing a more biased picture of the political reality,” the researchers wrote. “Rather than ideology alone, cognitive traits such as intolerance to uncertainty — which interact with ideology to form a polarized perception of the world — may be the linchpin of political polarization.”

Hot-button topics don’t have to be polarizing

“Even though abortion is a highly polarizing topic, the neutrally-worded news video yielded much less ideology-driven neural synchrony than the inflammatory debate video, which suggests that polarized perception is not just driven by ideological differences but also by the way polarizing issues are presented,” the researchers wrote.

That bit of the study is promising. It suggests that people might not be as inclined to succumb to ideology when information is presented in a more neutral, level-headed fashion.

Encouraging people to tolerate more uncertainty may steer them away from seeing the world through a thick ideological lens, which often “hampers bipartisan cooperation and can even undermine the basic principles of democracy,” the researchers wrote.

Still, widespread social and economic unrest can understandably make that a difficult task.

“The growing uncertainty caused by large-scale societal events in the past year (e.g. job loss and a global pandemic) may fuel political polarization by sowing rigidly partisan perceptions of the world,” the researchers wrote. “Conversely, interventions against polarization may be successful by addressing citizens’ sources of worry.”

There’s Only One Way To Beat The Speed Of Light

If you can’t surpass it in a vacuum, try doing so in a medium instead.In our Universe, there are a few rules that everything must obey. Energy, momentum, and angular momentum […]