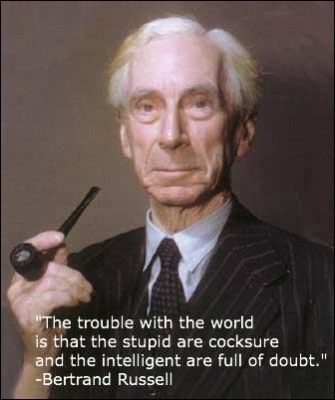 Below, I’ll return to the irony Thomas, Nancy and a few other Big Think Facebook perusers noticed —by the way, Bertrand Russell doesn’t look particularly unsure of himself in the photo, does he?— and in my next Praxis post I’ll outline a way forward for intelligent people who want to gain more confidence and coherence in their moral and political views without lapsing into dogmatism or posing with a pipe in hand.

Today I want to examine the two propositions embedded in the quotation by Russell, the British father of analytic philosophy who died in 1970.

A famous variation on Russell’s theme appears in William Butler Yeats’ “The Second Coming,” written in the wake of World War I:

The best lack all conviction, while the worst

Are full of passionate intensity.

Comparing Russell and Yeats raises questions about the relationship between intelligence and virtue: are the most intelligent also “the best”? Are the stupid “the worst”? The juxtaposition relates to the second variable as well. Where Russell speaks of confidence in one’s views, Yeats refers to the “conviction” with which one lives and acts on his views. Someone who is more certain of the truth of his opinions will be more likely to live a life of “passionate intensity” while those of us who are “full of doubts” will spend our days watching “Wheel of Fortune” reruns.

How well do these observations describe reality? Let’s take them one by one.

I – The Stupid Are Cocksure

Judging by the number of commenters who snickered at the word “cocksure” on the Facebook page, plenty fans of “Beavis and Butthead” inhabit the Big Think universe. Cock to one side, Russell’s claim is this: the less intelligent you are, the more likely you are to regard the world in simplistic terms and the more likely you are to think you have a sure grasp on the truth.

Charles Darwin issued this charge in his introduction to the Descent of Man when he claimed that opponents of the theory of evolution had their heads in the sand:

It has often and confidently been asserted, that man’s origin can never be known: but ignorance more frequently begets confidence than does knowledge: it is those who know little, and not those who know much, who so positively assert that this or that problem will never be solved by science.

Psychological research bears out the claim that low-intelligence people tend to be unjustifiably confident in their views. David Dunning, a professor of psychology at Cornell, teamed up with his graduate student in 1999 to publish “Unskilled and Unaware of It: How Difficulties of Recognizing One’s Own Incompetence Lead to Inflated Self-assessments.” The article was influential enough to leave its authors with a psychological phenomenon bearing their names: the “Dunning-Kruger effect.” Dunning undertook the research after reading about a hilariously incompetent bank robber who believed — mistakenly, it turned out — that coating his face with lemon juice would make him invisible to security cameras. Here is Errol Morris of the New York Times explaining what Dunning took away from the news item:

Dunning’s research has shown that students who perform poorly on grammar assessments and logical reasoning tests also badly overestimate how well they perform, while students scoring better on the tests make more accurate predictions of their scores.

So yes, it seems the stupid can be pretty cocksure.

II – The Intelligent Are Full of Doubt

This claim has less direct evidence to support it. The Dunning–Kruger effect only implies that smarter people are more able to detect and correct their own mistakes. It doesn’t say that intelligent people are necessarily wracked by self-doubt, and certainly not that they lack all conviction.

The original intelligent doubter was Socrates, who claimed in his defense speech in front of the Athenian jury that his wisdom consisted in his awareness of his ignorance. In contrast to the politicians, the poets and the artisans he met, all of whom were ignorant of their profound ignorance in everything but their specific craft, Socrates knew that he knew nothing.

But was Socrates “full of doubt”? Hardly. Socrates undertook his fieldwork among fellow Athenians in order to confirm the Delphic oracle’s pronouncement that he was the wisest of them all. He concluded his research with the confident assessment that the oracle was indeed right. The text of the Apology is not the statement of a whimpering nihilist. Socrates was smug from the first word to the last, and the jury was not amused or persuaded. They sentenced him to death for corrupting the youth of Athens and raising questions about the city’s gods.

Turning to our two most recent presidents as another example, we do find a correlation between intelligence level and doubt. Whereas President Bush portrayed himself as the “decider in chief” for whom foreign policy decisions come down to “you’re either with us or you’re against us,” certain moments in President Obama’s first term might earn him the title of “doubter in chief.” Obama was resolute in the operation that killed bin Laden, and he showed moxie in getting his stimulus and health care laws passed, but at other times Obama has appeared less firm in his views. He has testified to this.

Take the Easter Prayer breakfast last April when he said, “for like us, Jesus knew doubt”:

Or re-read what was for me the strangest passage in Obama’s speech at the Democratic National Convention:

And while I’m proud of what we’ve achieved together — (cheers) — I’m far more mindful of my own failings, knowing exactly what Lincoln meant when he said, “I have been driven to my knees many times by the overwhelming conviction that I had no place else to go.”

I’m all for humility, for this was a bit too much coming from a sitting president asking us for his vote.

Obama’s self-deprecation aside, most of us, not only those on the lower end of the intelligence scale, have a tendency to be a little too sure of ourselves. The condition might be more of a Republican problem, as Chris Mooney has argued, but irrationality is a non-partisan condition. In my next Praxis post, I’ll discuss a concept from the philosophers’ toolbox that can help all of us develop sounder, more justifiable views.

Google’s offer to provide Kansas City neighborhoods with super-fast Internet failed to fully penetrate poorer areas of the city. In response, citizens are getting the word out by foot and even by ice cream truck.