For those of you who were unaware, God has a twitter account. TheTweetOfGod is his handle. The account is managed by David Javerbaum, a comedy writerwith experience on the Daily Show. The account is an amusing way to view the divine perspective on things while you pretend to do work. It has even been the basis for a stage play.

Here, we have ten tweets from the almighty which give great philosophic insight. We’ll pair them with another quote from a mortal to help translate the wisdom to a human perspective.

In hindsight human civilization was a bad idea. 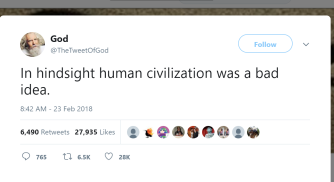 “The first man who, having fenced in a piece of land, said ‘This is mine,’ and found people naïve enough to believe him, that man was the true founder of civil society. From how many crimes, wars, and murders, from how many horrors and misfortunes might not any one have saved mankind, by pulling up the stakes, or filling up the ditch, and crying to his fellows: Beware of listening to this impostor.”

I’ll do better next universe. 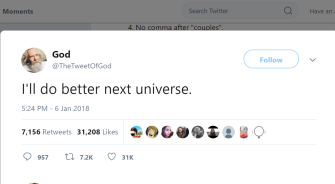 “If there were no best among all possible worlds, God would not have created one.”

Leibniz was a German mathematician, scientist, and philosopher in the 17th century. He is, regrettably, quite famous for his claim that this world is the best of all possible worlds, as a benevolent God would only create the best world possible. This idea has attracted a great deal of criticism, notably from Voltaire. It seems that God is on the side of Voltaire here, and will do better next time.

Your authentic self is ashamed of you. 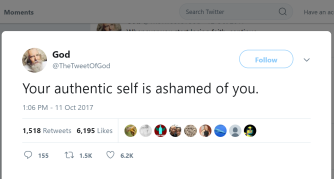 “He is playing; he is amusing himself. But what is he playing? We need not watch long before we can explain it: he is playing at being a waiter in a café. There is nothing there to surprise us.”

In his book Being and Nothingness, Sartre describes a waiter who makes certain choices and then points to the fact that he is a waiter as evidence that he cannot act otherwise. Sartre says the waiter is acting in “bad faith” and being inauthentic. We are always free, and we are not authentic if we try to deny our freedom. If there is a single virtue of existentialism, it is authenticity. It seems God is inclined to support authenticity as well. 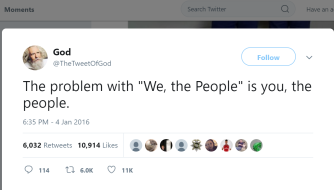 “They reserve their admiration for the man who knows how to lend a hand in controlling the captain by force or fraud; they praise his seamanship and navigation and knowledge of the sea and condemn everyone else as useless. They have no idea that the true navigator must study the seasons of the year, the sky, the stars, the winds and all the other subjects appropriate to his profession if he is to be really fit to control a ship.”

In the Republic, Plato gives us one of the most famous metaphors he has; the idea that statecraft is like sailing a ship and requires similar skills. As you wouldn’t let just anybody manage a sea voyage, why would you let just anybody vote? This is one of Plato’s many arguments against democracy. It seems that God holds a similar position, he understands that a problem with democracy is the dependence on the skill of the voters.

The less you know the more you don’t think you need to. 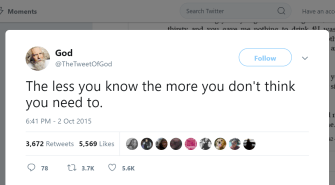 “The fundamental cause of the trouble is that in the modern world the stupid are cocksure while the intelligent are full of doubt.”

Russell and God are both explaining the Dunning–Kruger effect. In short, it is a curious situation where a person with limited knowledge of a subject overestimates how much they know about it, as they don’t know what they don’t know. The effect fades over time as knowledge increases and a person becomes more aware of their limitations. However, as John Cleese explains, it can be a lifelong affliction for some people. Both Gods and philosophers would know how painful it can be when you come across a lifetime sufferer.

You will all die. 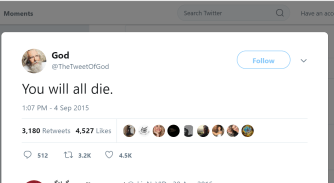 Heidegger was very concerned with Dasein, which is often translated as “being” or “existence.” He was also very concerned about how no matter what choices you make in life you are moving towards your death. The most authentic, if angst-ridden, existence is that which recognizes this. God is giving us a friendly reminder that death is coming!

Free will was probably a mistake. 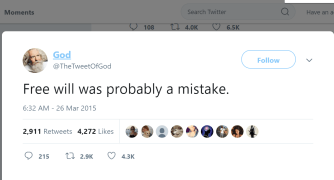 “Since God could have created a freedom in which there could be no evil (i.e., a state when men were happy and free and certain not to sin), it follows that He wished evil to exist. But evil offends Him. A commonplace case of masochism.”

Cesare Pavese was an Italian novelist who does a very good job of explaining the problem of evil and free will. The question of how an all-powerful God can be good and still allow evil to exist is often solved by introducing the idea of free will, suggesting that introducing freedom is good but allows some evil to exist. Pavese responds with a common retort that God could still have made evil impossible. God seems to have been dealing with this for too long and would prefer that we have no free will at all. (If we have it to begin with!)

Everything happens for no reason. It is extremely important to understand this. 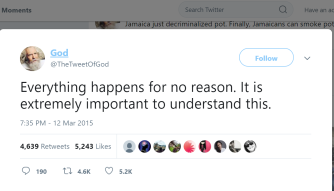 “The realization that life is absurd cannot be an end, but only a beginning.”

Camus was an absurdist. He argued that nothing has any meaning behind it. Life, the universe, and everything just happens to happen. We humans have a hard time with this and create systems to bestow meaning on things. When we look at something without meaning and fail to give it one, we experience the feeling of the absurd. Camus argues that we must grasp this, and face the world as the meaningless void that it is. God seems to agree.

My only regret is Creation. 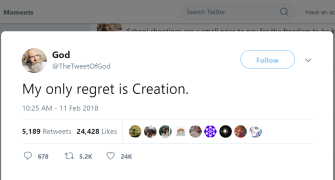 “If children were brought into the world by an act of pure reason alone, would the human race continue to exist? Would not a man rather have so much compassion with the coming generation as to spare it the burden of existence, or at any rate not take it upon himself to impose that burden upon it in cold blood?”

Schopenhauer was an antinatalist, he believed that the typical human life was not worth living as the suffering in it was too great. He, therefore, advocated not having children. This position has been held, infrequently, by many philosophers who just can’t find life to be worth living in a majority of cases. It seems that God might share this opinion, perhaps the world is too full of suffering to be justified?

You are your only hope. 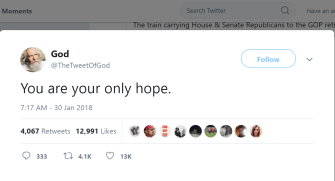 “Man is nothing else but that which he makes of himself. That is the first principle of existentialism.”

Sartre argued that, for humans, existence proceeds essence. We exist, and then we are responsible for what we become. With absolute freedom comes absolute responsibility. God seems to agree, it all comes down to the choices we make.

ChatGPT’s capabilities are astonishing.
Up Next
Mind & Brain

Does lack of exercise lead to dementia?

A number of studies show that various forms of exercise help prevent dementia as we age.